Here's how Infinity Ward is combating cheaters in Warzone and Modern Warfare.

In a strange and exciting twist, Infinity Ward has revealed their plans to cut down on cheaters in Modern Warfare and Warzone.

With cross-platform play, cheating has become far more common in the current Call of Duty title, with most culprits residing on PC.

So what are they doing to clamp down on cheaters?

In a statement released on Twitter, Infinity Ward have adjusted matchmaking and made it easier to report cheaters.

Starting this week, players in Warzone and Modern Warfare who report suspected cheaters will receive confirmation in-game when a player is banned.

They've also deployed additional dedicated security updates and made it so that those suspected of cheating are paired together.

Finally, they've increased the resources across their backend tech, studio and enforcement teams. 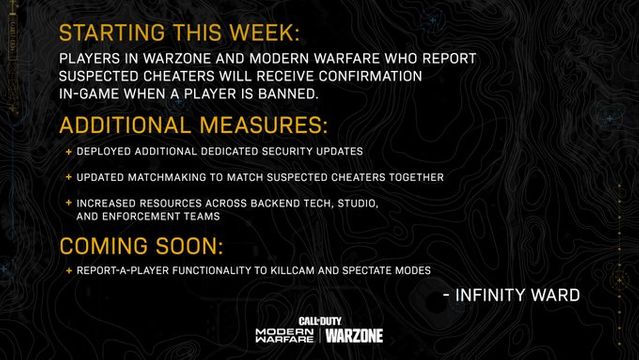 They also shared a new feature that is coming soon - players will be able to report a player when viewing a killcam or spectating a player.

It's certainly a welcome addition to the game as the cries of cheaters from the community is becoming far too frequent and it appears Infinity Ward's efforts to cut down on cheaters is not having enough of an effect.

It sounds like a great idea, giving cheaters a taste of their own medicine before they're cut off altogether. But, questions have arisen about falsely reporting players and potentially playing too heavy an influence on the matchmaking of players.

Perhaps players will excessively use this system to make the skill level of their lobbies easier by reporting good players. Time will tell how effective this new strategy ends up being.