Here’s our TOTS Prediction for the English Football League!

Team of the Season So Far has been announced in FIFA 20 Ultimate Team, and is scheduled to arrive next Friday (April 24th) in FUT, so here’s another TOTS Prediction!

Here are our picks for the FIFA 20 Football League Team of the Season 23 man squad. 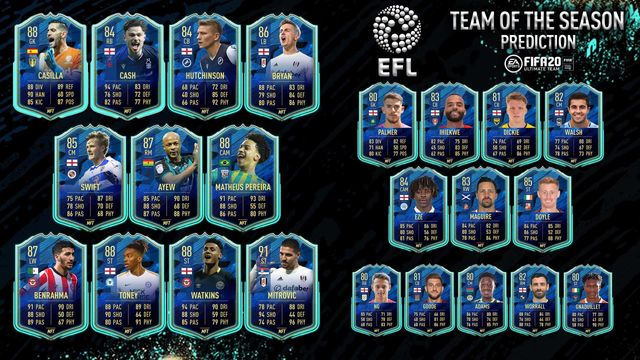 With an impressive 15 clean sheets in the Championship this season in Leeds’ title challenge, Casilla should be the favourite for the starting GK spot in the EFL TOTS.

The attacking full-back has had a prolific season for Nottingham Forest, grabbing 3 goals, 4 assists and 4 MOTM awards in the Championship.

Rated as the 3rd best player in the Championship this season, with 5 MOTM awards and 5 goals from centre half, the Millwall man should be a lock for EFL TOTS.

With a cracking season at LB for Fulham, racking up 7 assists and 4 MOTM awards in the Championship, Joe Bryan could become one of the better English LBs in FUT.

The 24-year-old Reading maestro has been their key playmaker this season, with 5 goals and 10 assists to his name, as well as an impressive 7 MOTM awards.

The Ghanaian has had an impressive season on the right for Swansea, with 12 goals, 5 assists and 7 MOTM awards in the Championship, enough to secure an interesting TOTS card.

The West Brom talisman tops the league assist rankings in the Championship, with 12 assists, as well as 6 goals and 4 MOTM awards from his CAM role.

Brentford’s highly sought after winger has been key in the league, grabbing 10 goals, 7 assists and a whopping 7 MOTM awards, making him the 2nd highest rated player in the Championship in the 2019/20 season.

Peterborough’s top striker boasts a league-leading 24 goals and an incredible 9 MOTMs in League One this year, setting him up for a guaranteed EFL TOTS item.

Brentford’s top striker has 22 goals this season in the league, just 1 beyond the top goal scorer, Mitrovic. With a massive pace stat to look forward to, this could be a real meta attacker to add to your FUT team.

The Serbian beast leads the Championship in goals scored with 23 this season, as well as a couple of FUT In-Form items to show for his efforts. More than enough to secure a 90+ rated EFL TOTS card.

13 clean sheets, as well as an assist for Plymouth’s number 1 could be enough to secure him the 2nd goalkeeper spot in the EFL TOTS.

The Rotherham defender has had a solid season, not only defensively but also going forward, with 2 goals and 3 assists to his name, making him the 2nd highest rated player in League One this season by WhoScored.

The 2nd League One CB in the selection, Dickie has 6 MOTM awards to his name, along with 4 assists as well.

Since transferring from Brentford, Liam Walsh has had an astonishing season for Coventry, with 3 goals, 5 assists and 6 MOTM awards from his midfield position.

WhoScored’s highest-rated player in the Championship this season, with 12 goals and 8 assists, and 9 MOTM awards. An incredible season for the 21-year-old, who’ll easily make his way into the EFL TOTS.

While Sunderland may currently be languishing just outside the playoff places in League 1, Chris Maguire has been their star man this season, with 19 goal contributions and half a dozen MOTM awards to his name.

The leading goalscorer in League Two, Eoin Doyle has an outstanding 25 goals for Swindon this season, surely enough to see him get a blue card this year.

Having already been included in the Community TOTS voting, Perry Ng should at least feature in the EFL TOTS, as it’s unlikely he’ll get selected for the 23 man Community TOTS squad, simply due to higher-rated, more appealing options being available.

League Two’s best CB by far this season has been Northampton’s Charlie Goode, with 9 MOTM awards under his belt in a successful league campaign.

The 2nd highest tackles completed in League Two this season, as well as 8 goal contributions and 5 MOTM awards for the Forest Green midfielder mean he could sneak onto the bench for the EFL TOTS.

The Port Vale man has been pivotal this season, completing the most key passes in the league, with a load of goal contributions also.

15 goals and 8 MOTM awards for the Blackpool ST in League One this season should be enough for him to sneak into the EFL TOTS.