Predator Hunting Grounds: Tips And Tricks for Predator and Fireteam

Predator Hunting Grounds is almost here – here's how to be the most ruthless hunter in the galaxy, or bring the Predator to its knees.

Predator: Hunting Grounds launches on April 24, with players able to step into the armour of the titular alien hunter or the shaking boots of soldiers trying to kill it.

With launch just days away, we've got some tips and tricks to help you bring the extra-terrestrial terror down – or lay waste to an entire squad as the Predator.

Pick An Objective And Stick To It

While the Predator is focused solely on slaying anything and everything that it can, Fireteam players have varied objectives even before adding the Predator to the mix.

If you want to drop your main objectives and team up to kill the Predator, that's fine – but be sure all your squadmates are in agreement. It's a tall task even for a co-ordinated fireteam, but not impossible as long as everyone knows you're gunning for it.

Be sure to set squad expectations at the start of a match. Less experienced teams might simply want to complete their objectives and make a run for it, and that's absolutely fine.

The Hunt Is On

The Predator's tracking vision isn't just movie-accurate – it's essential for spotting enemies in the forest. That doesn't mean there aren't other tricks you can use, though. Target Isolation is a nifty ability that can let you narrow down your targets' location. It's on cooldown and won't pinpoint your opponents exactly, but can help speed up the scouting process. 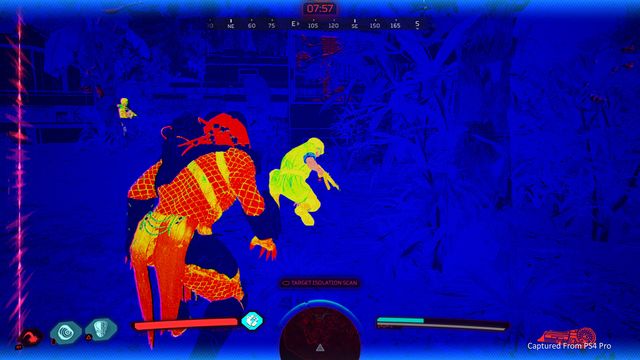 Just as he does in the original movie, the Predator can be overwhelmed and will need to retreat to heal. With that in mind, keep an exit route in mind when engaging targets, particularly if there are more than one in a single spot.

Predators have the luxury of a single objective, and that means you can bide your time. Strike when the Fireteam is battling AI enemies, for example, or wait until they've split up or are out of healing supplies.

As a unit, the Fireteam can cut the Predator to ribbons, but if a member is isolated they'll be eliminated quickly. With that in mind, you'll want to avoid straying too far from your pack if you're playing as a human. Of course, if you're too close you'll likely receive splash damage from any explosives, so aim for medium distance!

Just as was found in the original movie, mud can make all the difference. Rolling around in it can hide your heat signature from the Predator, so it's worth getting your hands dirty wherever possible.