FIFA 20 TOTS So Far: Community Team of The Season So Far Prediction

Being voted for on Futhead and Futwiz (click to find links to cast your vote) by the community, this TOTS squad will kick start the promo in a big way.

Here is our 23 man selection for who we think will make it into the Community Team of the Season So Far.

Community Team of the Season Prediction

Here are our picks for the FIFA 20 Community Team of the Season 23 man squad. 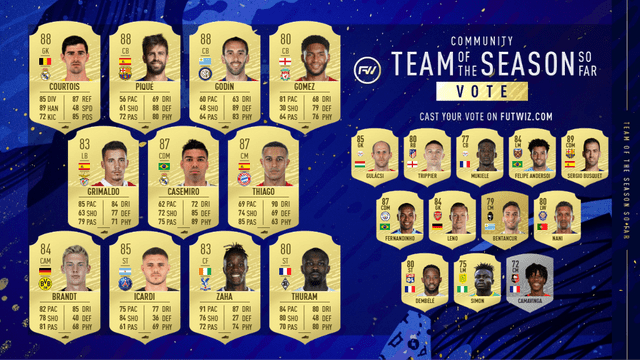 Courtois has 12 clean sheets in La Liga this season, with only 16 goals conceded, and being the best goalkeeper in the Community TOTS vote, is likely to get selected.

Another solid season from Pique, keeping a number of clean sheets this season, as well as being the leading defender for passes completed this season. Expect a well rounded 95 rated item for his Community TOTS.

While other CBs in Serie A may have had better seasons, the community TOTS CBs aren’t incredibly high rated, meaning Godin has an outside chance of being included.

The most popular selection by far in the Community TOTS, Joe Gomez is guaranteed to be included and should be one of the best cards in the squad.

One of the most promising LBs in world football currently, Grimaldo assisted 6 goals from left-back this season, grabbing 3 MOTM awards in the process. He’s the best LB in the Community TOTS selection and should feature.

Casemiro has been a rock in midfield for Madrid, amassing the most tackles and interceptions in the league by a mile, surely enough to secure him a spot in Community TOTS.

Partnered with Kimmich, Thiago has looked solid this season and is rated as Bayern’s 3rd best player this season by WhoScored, narrowly behind Gnabry and Lewandowski. Backed heavily by the community, Thiago should fill one of the starting midfield spots in Community TOTS.

Dortmund players are always popular in FUT, and Julian Brandt looks set to be included in Community TOTS, with a large number of votes already including him in on social media.

The highest-rated striker in the Community TOTS vote should easily feature in the final selection.

One of the most popular attackers in the Community TOTS selection due to his pace and skill move combination, Zaha should definitely feature in the squad.

Having had a great season for Gladbach, Thuram is deserving of a TOTS card. With the potential for a top card with great pace, shooting and physical stats, he should receive plenty of votes.

With the Bundesliga somewhat lacking in top tier GK options outside of Neuer’s special cards, Gulacsi should be a very popular choice in the Community TOTS voting, making up the 2nd GK spot behind Courtois.

With that World Cup free-kick still being replayed, it’s likely that Trippier will make it into the selection.

As a pacey French Bundesliga defender, Mukiele will be a very popular selection amongst the community, with many top tier French players already in FUT.

A fan favourite for several years thanks to his pace and technical ability on the wings, Felipe Anderson would be a top selection, and the community are likely to vote him in.

Despite not being the most meta selection in FUT, Busquets is highly rated and for a lot of the more casual voters, that’s a big plus.

While Fernandinho may not have had a standout season, the draw of a high rated TOTS item should draw the community towards him in the voting.

While there are only 2 goalkeeper selections, Leno has a chance of making it onto the subs bench. We all know Arsenal fans are devoted, and this could swing the votes in his favour.

Being a hot prospect playing for Piemonte Calcio (Juventus), Bentancur should be set for a Community TOTS item. With Juventus midfielders having a slight lack of quality, he could fill that gap.

With a slight restriction on the number of players you can have from 1 league in the Community TOTS voting, Nani could easily sneak in, with 5* skills and his legend status at Man United being the key factors.

Already with a Future Stars item this year, Moussa Dembele is a very popular player in FUT and real-world football, and the voting should reflect that.

With many of the community falling in love with his FUTMAS card, Moses Simon could get a far larger representation in TOTS voting than many would expect. Keep an eye on this one.

One of the more deserving midfielders for a TOTS item, Camavinga should end up in the final 23 man selection. The only downside is that he’s silver, meaning some voters may ignore him due to his low rating.