With many speculating that Team of the Season may arrive at the end of April in FIFA 20 Ultimate Team, it’s time to ramp up our Team of the Season predictions even more, and begin looking at some of the lower leagues we can expect to see dropped!

Here are our Liga NOS TOTS predictions for the squad of 23 players we’d expect to see released into packs.

Here are our picks for the FIFA 20 EredivisieTeam of the Season 23 man squad. 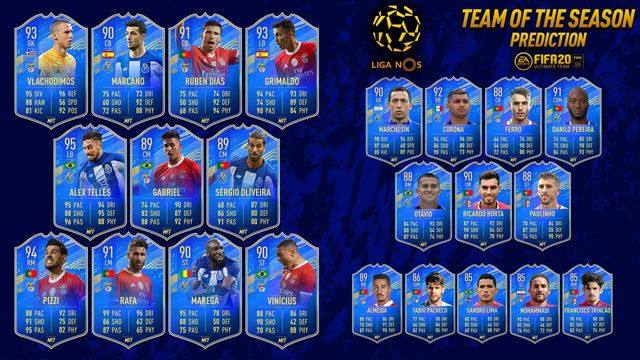 A brilliant season between the sticks for Benfica’s Greek god Vlachodimos with 14 clean sheets and only 14 goals conceded should be enough to secure him the starting TOTS spot for Liga NOS.

5 goals from CB for the Spaniard, after a season in which Porto only conceded 16 goals should be enough to get Marcano into the TOTS.

The highly sought after 22-year-old has been a rock in defence for Benfica this season, only conceding 14 goals while scoring 2 from the defence.

One of the most promising LBs in world football currently, Grimaldo assisted 6 goals from left-back this season, grabbing 3 MOTM awards in the process.

With big transfers rumoured for Telles, following an impressive season which saw him secure 8 goals and 5 assists from full-back, he should be set for an incredible TOTS card.

The CM positions have been tricky to fill in Liga NOS, however, Gabriel could receive a blue, after getting a solid 7.33 average rating for the season for WhoScored.

While not featuring heavily for Porto this season, Oliveira’s 2 goals, 3 assists and 4 MOTM awards should be enough to secure him a spot in TOTS.

14 goals, 8 assists and 4 MOTM awards for the main Benfica man this season will secure him a tasty TOTS card, around 94 rated.

The pacey left midfielder has been attracting interest from Premier League clubs recently, and with 5 goals, 3 assists and 5 MOTM awards, a TOTS item is on the horizon.

The man from Mali has bagged 6 goals and 5 assists this season for Porto and should see him receive a beast of a TOTS card, with mid-90s pace and physical.

The 25-year-old Brazilian has torn it up in Liga NOS this season, with 15 goals and 4 assists in the league, making him the top scorer.

The 2nd GK in the team has to be Marchesin, with 12 clean sheets and only 16 goals conceded in the league this season.

The Mexican has had a strong season for Porto, with 2 goals and 7 assists making him a key playmaker from his deeper right-back role.

The Ferro - Dias partnership for Benfica has worked a treat this season, with them being the strongest defence in the league. He should receive his first boost of the season with a TOTS item.

Midfielders have been tricky to include this season, however, Danilo Pereira could make it into the squad having held down the CDM spot in a title-challenging Porto team.

The highest-rated player for Porto this season according to WhoScored, Otavio has grabbed 5 assists in the league, as well as 2 MOTM awards.

The first player outside of Porto and Benfica, Ricardo Horta has grabbed 7 goals and 4 assists for Braga this season, along with 3 MOTM awards.

The 27-year-old boasts an impressive 10 goals and 4 assists for Braga this season, which have taken them into the top 3 in Liga NOS.

2 goals and 2 assists for the full-back, as well as a strong defensive showing this season for Benfica, should secure him the 2nd RB spot in the team behind Porto’s Corona.

Pacheco has been a strong presence in CDM for Moreirense this season, with 1 goal, 2 assists and 2 MOTM awards. He could sneak in with a lack of central midfield options this year.

The 29-year-old Brazilian is currently sat on 10 goals and 5 MOTM awards for the season, which could be enough to sneak him into the reserves for TOTS.

12 goal contributions for the Iranian ST could get him into TOTS this year, with 7 goals and 5 assists to his name.

Despite having a lot of substitute appearances, Trincao has 4 MOTM awards, along with 6 goals and 3 assists for Braga this season, and should see him grab a spot in TOTS.