Could the mythical Switch Pro be edging closer to reality?

Yesterday's firmware update for the Nintendo Switch offers some handy new features, but it also offers new hints at a fresh model of Nintendo's hybrid console.

As spotted by Mike Heskin, the firmware adds "preliminary support" for a new console with the codename "nx-abcd".

Read More: Animal Crossing New Horizons: How to get every item in the game using Nookazon

The "NX" was Switch's original codename, and previous consoles, including devkits and 2019's Switch Lite have been referred to as the nx-abca, nx-abcb and nx-abcc, so the new codename is in keeping with the current convention. 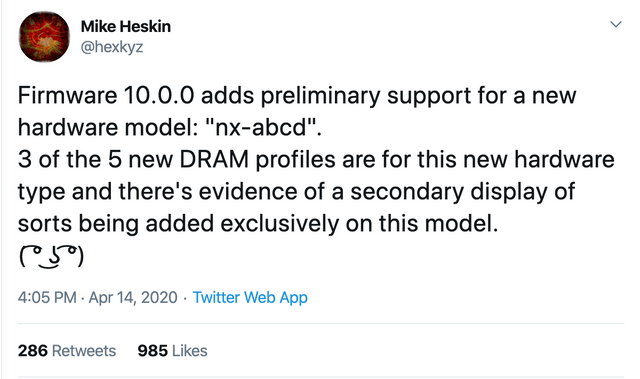 That's not all, though – Heskin also notes that there's evidence of a "secondary display of sorts" that'll be part of this new hardware. While that does sound a bit like Nintendo's DS line of systems, there's also a chance that it could be a screen for menus, notifications, or a decent way to chat with your friends without resorting to Nintendo's app.

While Nintendo is no stranger to hardware revisions (we've already had two versions of the Switch alongside the Switch Lite), the company has publicly state there are no plans to release a new Switch model in 2020 – so don't expect to hear more about the rumoured second screen for a little while.