Check out our predictions for Eredivisie TOTS in FIFA 20 Ultimate Team.

With many speculating that Team of the Season may arrive at the end of April in FIFA 20 Ultimate Team, it’s time to ramp up our Team of the Season predictions even more, and begin looking at some of the lower leagues we can expect to see dropped!

Here are our Eredivisie TOTS predictions for the squad of 23 players we’d expect to see released into packs, as well as a handful of players that could feature in SBCs and Season Objectives.

Eredivisie Team of the Season Prediction

Here are our picks for the FIFA 20 EredivisieTeam of the Season 23 man squad. 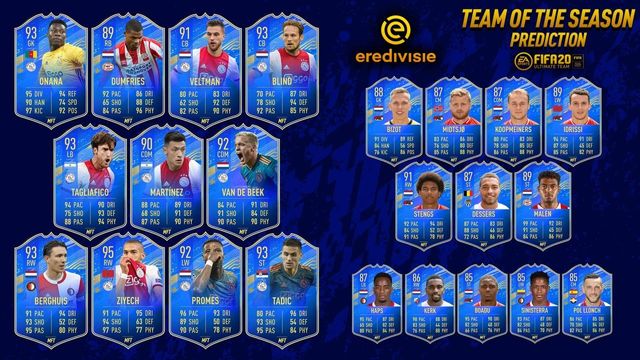 8 clean sheets in the Eredivisie is a respectable tally for the highly-rated Cameroonian, and with Ajax leading the table, he should feature as the starting GK.

While PSV are just outside the top 3, Dumfries has been a key player at full-back, contributing 7 goals this season.

The first of many Ajax inclusions in this TOTS, Veltman has been a strong defensive unit for Ajax this season, with an average rating of 7.43 for the season from WhoScored.

The 2nd CB in this team goes to Daley Blind, who’s been solid alongside Veltman this season, with an IF to his name.

Already with a Headliner card in FUT, Tagliafico has a strong season, with 3 goals and 4 assists from left-back, as well as 3 MOTM awards.

Having played in both CM and CB this season, Lisandro Martinez has been a key man for Ajax, with a Future Stars item in FUT already earned.

Van de Beek has been a major threat from midfield this season for Ajax, with 8 goals and 5 assists in the Eredivisie, more than enough to secure a TOTS spot.

A prolific goalscoring threat this season for Feyenoord, with 15 goals, 7 assists and 6 MOTM awards, Berghuis looks set to receive a tasty RW card this year.

Despite already having a transfer to Chelsea arranged, Ziyech has proven yet again to be a key man for Ajax, with 6 goals, 12 assists, and 4 MOTM awards. Rated as the best player in Eredivisie this season by WhoScored, his TOTS card should be very good indeed.

An immensely popular FUT item, Promes should be included in the TOTS for his 16 goal contributions from LW. With 5* skills, this card will be massively in demand.

Ajax’s main goal-scoring threat this season, with 11 goals and 14 assists, Tadic has been a key man, playing in a more advanced striker role.

With an astonishing 18 clean sheets this season, Bizot will be guaranteed a TOTS spot in the Eredivisie TOTS.

A key man in the middle of midfield for AZ in their quest for the title, the Norwegian has earned 4 MOTM awards and a solid 7.56 average rating from WhoScored for the season.

Having played both defensive and midfield roles for AZ, Koopmeiners should receive either a CB/CDM card, with an impressive 11 goals and 2 assists from deeper rolls this season.

The 24-year-old winger has had a great season, with 13 goals, 3 assists and 5 MOTM awards, more than enough to earn a TOTS item.

Linked with a number of top tier transfers this year, Stengs has been a key playmaker this season, assisting 7 goals and scoring 5 this season.

The Belgian is currently the leading scorer in the Eredivisie this season, alongside Feyenoord’s Berghuis, with 15 goals, as well as 5 assists and 4 MOTM awards.

Already with a Future Stars item in FUT 20, Malen should get an even better card this TOTS, having scored 11 goals in the league.

Another LB inclusion in the Eredivisie, Haps has 2 goals, 2 assists and 2 MOTM awards, as well as a strong WhoScored rating for the season.

10 goals, 7 assists and 4 MOTM awards for the Utrecht winger should be enough to sneak Kerk into the TOTS this year.

While many feel that Boadu should’ve already received a Future Stars card, Boadu should be set for a TOTS item, after an impressive 20 goal contributions in the Eredivisie for AZ.

While other attackers have contributed more goals this season, Sinisterra has been a key figure in the Feyenoord attack, highlighted by his 5 MOTM awards.

Willem II have had an impressive Eredivisie season, helped by Pol Llonch in the midfield, who’s been a key man.