PS5: Bethesda's Pete Hines Got To Try Out The New DualSense Controller

Bethasda's Pete Hines got a hands-on experience with the new DualSense controller, and then later shared his thoughts on Sony's next-gen tech.

We're starting to see reports begin to emerge on the recently revealed DualSense controller from people outside of Sony's circle.

Pete Hines, the senior vice president of global marketing and communications (what a title) at Bethesda, shared his first impressions, after getting the opportunity to try out a DualSense controller.

Hines noted that he got to try out both the controller's overall haptic feedback, which Sony said could help convey the feeling of the "slow grittiness of driving a car through mud", and the adaptive triggers. 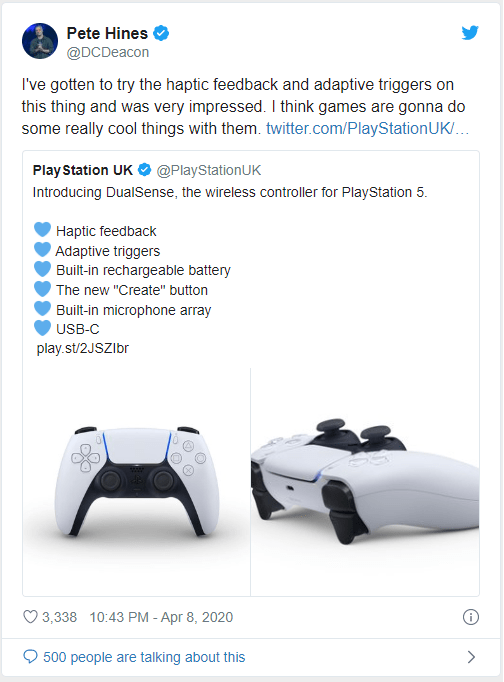 Hines most likely wouldn't have anything critical to say about the next-gen considering it belongs to his company's most important partners.

But equally, he wouldn't have gone out of his way to not only tweet about it, but also reply to excited fans and answer any questions. He also added "I think games are gonna do some great things with them".

It's great seeing people outside of Sony sharing their excitement for the controller, after trying it out, the only downside is the face the rest of us non-Sony-partners have nothing to do but wait.

Pete Hines really showed off his excitement for the DualSense controller when answering a particular question from a fan on Twitter: 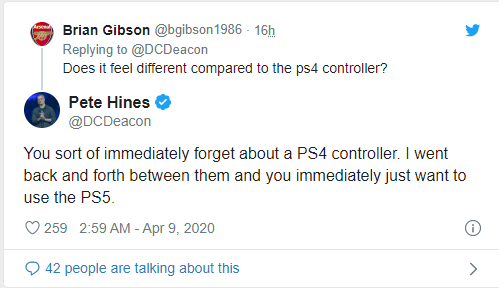