The Renetti handgun is one of two new weapons added to Modern Warfare. Find out how to master this weapon with three unique loadouts.

Season 3 of Modern Warfare has gone live across all platforms. As part of the new season, two new weapons have been added to the ever-expanding weapon arsenal – the SKS Marksman Rifle and the Renetti handgun.

The Renetti is a very well-rounded pistol, effective in the majority of scenarios and thanks to its semi-automatic rate of fire and minimal levels of recoil.

In this article, find the three best loadouts for the new pistol along with some handy tips and tricks to help you master this new weapon.

This first loadout is designed with maximum mobility in mind, giving you the upper hand in close-quarters engagements. 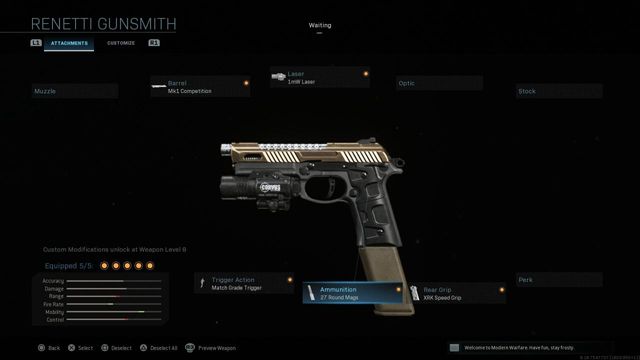 This combination of attachments allows you to fly around the map and with some extra bullets in the magazine, it reduces the need to reload constantly, allowing you to keep fully focused on the action.

Double Time allows you to use Tactical Sprint for longer, enabling you to move around the map quicker while Ghost keeps you hidden from any opposition UAVs. With all the rushing around that you are likely to be doing, Battle Hardened makes the perfect third perk, increasing your resistance to any flash and stun grenades that are likely to be used to slow you down.

The superior speed that you possess means that you can get away with using a throwing knife and hit some crazy bank shots with them! Don’t forget to use the stun grenade to slow your enemy before taking them out with the pistol or with a throwing knife.

Equipping dead silence allows you to navigate the map quickly and undetected, making it ideal for sneaking behind the enemy for some easy kills with the pistol.

It is likely that you will be taken down quite a lot given the amount of aggression that you can utilise with this loadout. This streak combination still deals plenty of damage and there is always a possibility of securing a good killstreak from within a care package.

Aimed at passive players that prefer to sit back and pick off enemies, this loadout can be used to make an impact on its own or as a very strong secondary weapon ready to go in the back pocket. 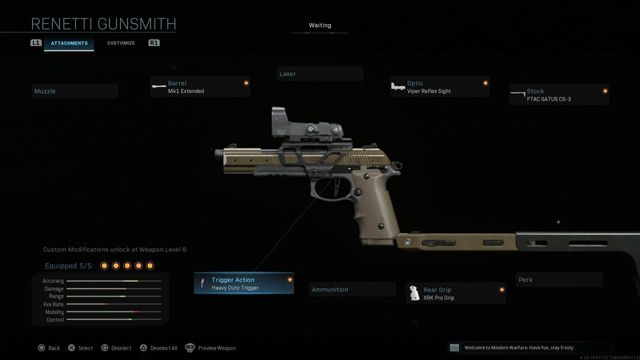 This attachment combination enables plenty of firepower at the longer distances and lots of stability when engaging in a target that is a long way from you.

Scavenger means that you are extremely unlikely to run out of any ammo, Hardline means killstreaks are one less kill to earn and Spotter means you can still provide support for your team by pinging any enemy equipment that may be lurking around corners.

Selecting a frag grenade gives you the ability to throw it longer distances that a Semtex or another piece of equipment while the smoke grenade can be used to disguise your cover if you want to reposition to another location.

For the passive players, place the trophy system close to you to prevent any incoming grenades within your position.

These streaks can be earned relatively easily when you manage to find a good position on the map. If you want to secure White Phosphorus then focus on positioning to cause chaos on the map.

The final loadout is a throwback to the B23R pistol from Black Ops 2. This burst pistol can deal ridiculous amounts of damage at close range. 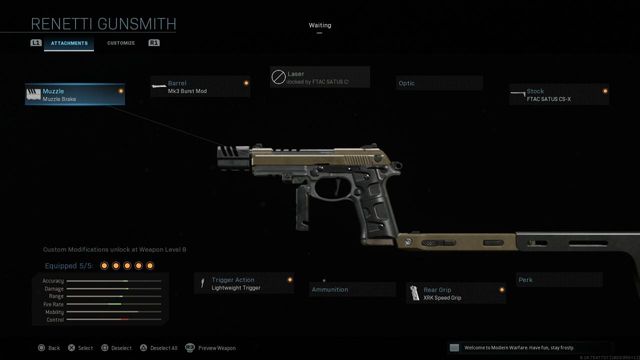 The addition of the burst mod gives the Renetti a three-round burst, increasing its damage and fire rate making it slightly quicker to take down an opponent.

Quick Fix increases the speed of health regeneration after you have scored a kill or captured an objective. High Alert will increase your awareness with a flash alerting you when an enemy has spotted you and Shrapnel gives you a second piece of lethal equipment to use in the battle.

Use the Molotov to clear out any enemies hiding in a window and combine it with a snapshot grenade to give you a glimpse of any opponents close to you.

You can further increase the lethality of the burst rounds by adding some stopping power rounds into the magazine to secure kills with a single burst.

These streaks are perfect regardless of the style of play that you choose. The radar provides intel on anyone near your position and the emergency airdrop is a good way to a variety of killstreaks in quick succession.