Final Fantasy 7 Remake is here, and the Hell House is a tough opponent. Here's how to beat it.

Final Fantasy 7 Remake is finally here, after years of waiting!

While much of the game's boss battles are fairly simple, the Hell House at the end of Chapter 9 can be a real pain in the glass (that's a window joke, and you'll see why soon).

Here's how to bring the house down.

Once you step into the arena to battle Hell House, be prepared for a fight. There are three stages to the boss battle, and they get tougher each time.

You'll want to load up with a varied mix of Materia to increase your chances of success. We'd suggest packing everything elemental – Aero for wind, Blizzard for ice, Thunder for lightning and Fire for, well, fire.

As far as Summon spells go, avoid Ifrit or Shiva and opt for a non-elemental one instead – Chocobo and Moogle or Fat Chocobo will do the trick.

Remember those spells you loaded Cloud and Aerith up with? You'll want to match them to the colours of the house's windows.

Once you've knocked it about a bit, the windows will turn red, yellow, green or white. Here's what you need to use:

Once you've staggered it, you'll get a brief cutscene to set up Step Two. 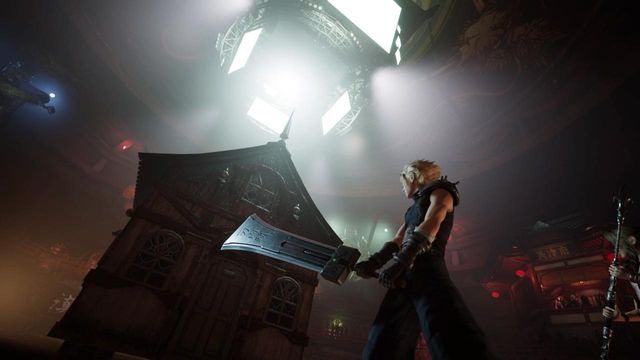 The house will take to the skies and start hurling furniture at you, so you'll want to make liberal use of the dodge button.

When it starts to charge its attacks, attack with the corresponding spell (Blizzard for its fiery ones, and Fire with its icy ones). This will help stagger it, and then Cloud's Focused Thrust ability can knock it down even more.

After this, the house gains extra mobility – in fact, it'll fly for a period. Be sure to dodge constantly, but keep an eye on a countdown that'll appear above the house.

That countdown leads to the house dropping his shield, which and when it does you'll need to hit it with the elemental spell that matches its window colour again.

After knocking it out of the air, and dealing plenty of damage when its staggered, rinse and repeat and you'll finish the fight.

Final Fantasy 7 Remake Weapon Upgrade Guide: How to boost your weapon with Skill Points and how to get them