Here we go over the Ligue 1 TOTS predictions for the squad of 23 players we’d expect to see released into packs, as well as a handful of players that could feature in SBCs and Season Objectives.

Ligue 1 Team of the Season Prediction

Here are our picks for the FIFA 20 Ligue 1 Team of the Season 23 man squad. 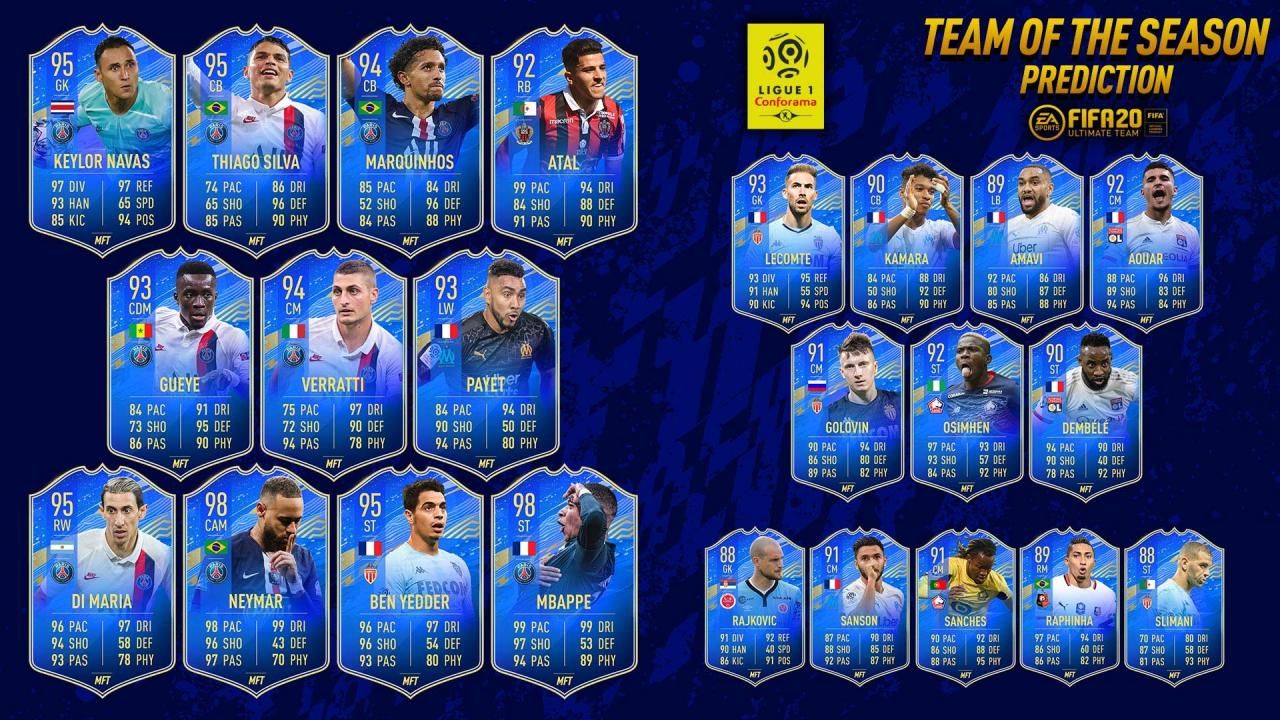 The Costa Rican shot-stopper has been a wall in the PSG goal, conceding only 18 goals in 21 games this season. With 11 clean sheets as well in Ligue 1, he should easily be the starting keeper this year.

The Brazilian has had yet enough impressive year for PSG, keeping them well ahead in Ligue 1, putting in some solid defensive performances.

Having played in midfield a little this year, Marquinhos could well be set for a CDM card, freeing up space potentially for Kimpembe to feature, however we’ve included him as a CB in our prediction.

A very popular card in FUT, we had to include Atal for an impressive season with Nice, in which he was rated the highest overall player for them by WhoScored.

Gueye has played a vital role in the midfield for PSG this season, breaking up attacks in their 2 CDM formation, while contributing to a handful of goals with 1 goal, 2 assists and 1 MOTM award.

Verratti has played a slightly more attacking role than Gueye this season, contributing 5 assists in a solid season.

Payet has been Marseille’s main man this season, grabbing 9 goals, 4 assists and 8 MOTM awards so far in Ligue 1, enough to secure him the starting LW spot in TOTS.

The Argentine winger has had an incredible season for PSG, topping the assist charts with 14 assists, alongside 8 goals and 6 MOTM awards.

Without a doubt the most expensive TOTS card in the team, Neymar is guaranteed to be included after a season in which he bagged 13 goals, 6 assists and 8 MOTM awards for PSG. He will also be set as a central CAM having played there the majority of the season.

Another massively popular card in FUT, Ben Yedder is set to receive an awesome TOTS item after scoring 18 goals for Monaco this season. With his 5* Weak Foot and incredible stats, this will be one of the best STs in the game.

This TOTS card has the potential to be even better than Mbappe’s current TOTY card. Having scored 18 goals, assisting 5 and securing 6 MOTM awards in Ligue 1, there’s no doubt that Mbappe gets in.

Lecomte secures the 2nd GK spot for this TOTS squad, having saved a total of 91 shots this season, securing 7 clean sheets in the process.

Despite already having a Future Stars card, Kamara should be set for an even better TOTS item, after having a solid season for Marseille in defence.

The 26-year-old has been one of Marseille’s key men, contributing a couple of goal contributions from LB, as well as 2 MOTM awards.

Aouar has been a key man in the middle of midfield for Lyon this season, with 3 goals and 4 assists to his name, as well as a strong pass percentage.

A pivotal figure in midfield for Monaco, Golovin has racked up 3 goals, 4 assists and 3 MOTM awards, which should secure him a spot in midfield despite strong competition in Ligue 1 this season.

Another FUT favourite, the Nigerian gets into our TOTS with 13 goals and 4 assists to his name, getting an upgrade from his already impressive Future Stars card.

Top scorer for Lyon this season with an impressive 16 goals, Moussa Dembele will likely make the TOTS bench, building on his already solid Future Stars item.

Reims have had a solid season this year in Ligue 1, with Rajkovic picking up 12 clean sheets in the league this season.

The Marseille midfielder has been a key player this season, picking up 5 goals and 4 assists from midfield.

Ranked as Lille’s 2nd best player by WhoScored this season, only slightly behind Osimhen, Sanches has picked up 5 MOTM awards from CM, as well as 3 goals and 1 assist.

A Rennes player had to be included after their impressive Ligue 1 campaign. M’Baye Niang has strong competition from other more prolific strikers in the league, but Raphinha should get in on the right-hand side, having scored 5 and assisted 3 this season.

The final inclusion for this TOTS is Islam Slimani, with an impressive 16 goal contributions for Monaco this season, as well as 2 MOTM awards.