Xbox Series X: Why The Optical Audio Port Is Not Included In Microsoft's New Console - Will My ASTROS Work With The New Xbox?

Xbox Series X will not feature an optical audio port, here's why.

If you take your gaming seriously, you'll have likely invested in a high-end headset and utilise the optical audio port on your current console; something that is not featuring in the Xbox Series X.

While the Xbox Series X continues to dominate the battle against the PS5, this is undoubtedly the more stranger decision considering they're choosing to stick with old school AA battery support for their controllers.

So why doesn't the Xbox Series X have an optical audio port? Will it support major headsets like ASTRO and most mixamps?

Why Doesn't The Xbox Series X Have An Optical Audio Port?

Despite this port appearing in some leaked prototype shots, the Xbox Series X will not feature an S/PDIF optical audio out port.

Phil Spencer, the Xbox boss, confirmed the absence in the latest episode of 'Unlocked'.

In his explanation, to summarise, it came down to utilising those costs in other areas.

"If you look at a part on a console that’s maybe one, or two dollars and you say, ‘okay, how big of a deal is that inside of a console?’ That’s a few hundred dollars. But then you say, ‘okay, we’re going to plan to sell, you know, 100 million of these consoles.’ So you take two bucks over 100 million now you’re $200 million over the life of the program.”

It's worth mentioning that there were spatial considerations to take into account when fitting the component.

The decision was largely made by how many people actually use the port, which is clearly not high enough for Microsoft to consider keeping it. Many who have invested in mix amp and headsets that rely on this feature will be disappointed to know they may need to reinvest in hardware, along with the big investment a new console comes with.

Will My Astro's Work On Xbox Series X?

Major headset retailer ASTRO Gaming has been quick to put many gamers at ease by tweeting the following:

"We are working with our partners at Microsoft to roll out a firmware update for MixAmp Pro TR, A50 + Base Station and A20 headsets by launch of Xbox Series X. This update will include the ability to deliver game surround sound & voice chat via USB. Stay tuned for future updates." 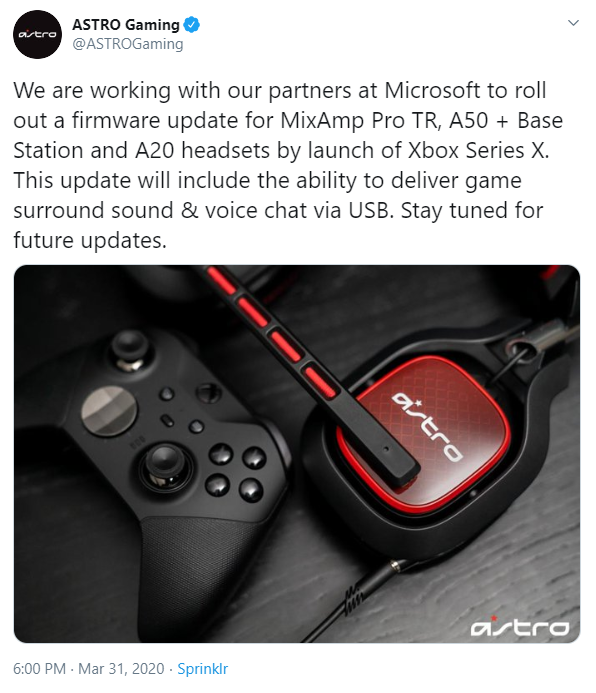 While we'll have to wait on the final verdict, things seem in good hands. ASTRO is one of the top headset providers in the gaming industry and this will certainly clear up some uncertainty.

It's unclear what other providers will do and how they will react. As a suggestion, it would be a wise idea for Microsoft or another company to create an Optical cable to USB adapter to accommodate older headsets and mixamps that may suffer due to this change.

PS5's Fan Speeds Can Be Adjusted Via Software Updates