With the first week of FUT Birthday quickly nearing the end in FIFA 20 Ultimate Team, it’s time to start looking at some players we’d like to see included in the 2nd batch of players, released this Friday into FUT.

With the first week of FUT Birthday quickly nearing the end in FIFA 20 Ultimate Team, it’s time to start looking at some players we’d like to see included in the 2nd batch of players, released this Friday into FUT.

This piece covers 10 players we’d love to see included, in various positions and leagues that haven’t been covered from the first team, as well as all the skill move and weak foot upgrades we’d love to see!

Here are the 10 players we’d love to see included in the 2nd half of the FUT Birthday promotion. 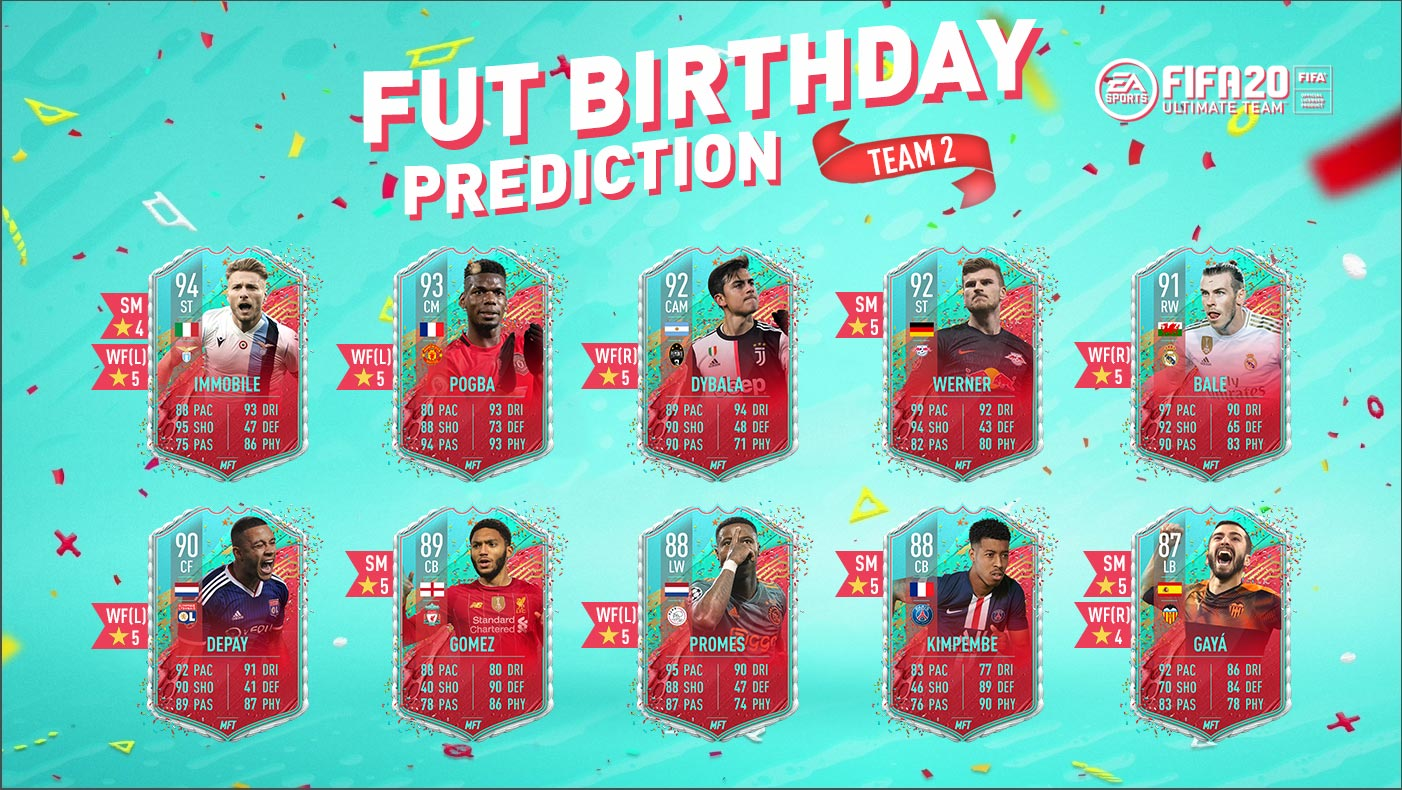 Ciro Immobile has been nothing short of incredible this year in Serie A, however his FUT cards are somewhat underused with a lack of skill moves and and 5* weak foot. This FUT Birthday card would be one of the best strikers in the game, a highly demanded item.

Due to Pogba’s long term injury woes this season, we haven’t yet seen a single upgraded version of Pogba. FUT Birthday could easily be the opportunity for a boosted Pogba, now with 5* Weak Foot to match his 5* skill moves.

Unfortunately for Dybala, he’s regularly overlooked in FUT due to only possessing a 3* weak foot, which makes him rather predictable in attacks. With a boosted 5* weak foot card this FUT Birthday, he’d no doubt be one of the most popular attacking midfielders in FUT.

Werner is no doubt a solid attacker in FUT this year, however only having 3* skill moves does make him slightly less desirable than other attackers. With a +2 skill move boost, he’ll have pretty much everything needed to be a top tier meta striker and will be highly desirable.

Despite having a rocky season at Real Madrid, Bale is still a top card to use in FUT and could be made to be massively popular with a boost to 5* weak foot. With a strong weak foot, along with his pace and technical ability going forward, Bale would be a real handful.

With the tricky Dutchman already having 5* skill moves in FUT, a 5* weak foot boost to accompany them would make him a scary attacker to utilise in Ligue 1. Imagine the 4 man attack of Depay, Neymar, Mbappe and Ben Yedder!

Following the rather odd upgrades that were applied to CBs in team 1, Joe Gomez could be a good player to give 5* skill moves to, if EA follows the same pattern. A rock defensively, Gomez also possesses some technical ability that would allow him to utilise the skill moves somewhat.

Promes has been one of the best super subs in FUT this year, with many using his Ones to Watch card throughout the year. What better way to celebrate such a popular card by giving him a big overall stat boost, as well as a 5* weak foot during FUT Birthday.

Another CB that could be up for a skill move upgrade, Kimpembe has only received 1 upgrade so far this year. With a big boost in overall and stats, he’d become not only one of the better Ligue 1 CBs, but a fun 5* skill CB option, with decent enough dribbling to pull them off.

Similar to Cancelo’s boosts from the first team, we’d love to see Gaya get a big boost, with +1 skill moves and +1 weak foot, to make him an exciting attacking full-back option in La Liga.