Will MW2 Multiplayer Remastered come with the release of the campaign?

We've finally had MW2 Campaign Remastered, but it's left players a bit hollow - where is the multiplayer?

An MW2 Multiplayer Remastered is something that players have been pleading with Activision for some time. Will this mode be remastered at some point and see the light of day?

As it stands there is no release date for MW2 Multiplayer Remastered and there's no assurances that there ever will be one.

Could The Multiplayer Have Already Been Developed?

So far there hasn't been much talk about the multiplayer for Modern Warfare 2 Remastered if there was to be a remake of this game you would have to assume it would be its biggest selling point.

Given that the game was released by itself, the likelihood seems slim at the point. It's also worth noting this game was developed for the current generation of consoles, so if we were expecting to see it, it's likely to be within the next few months; otherwise, it's unlikely we will see it at all unless it was again developed for next-gen. 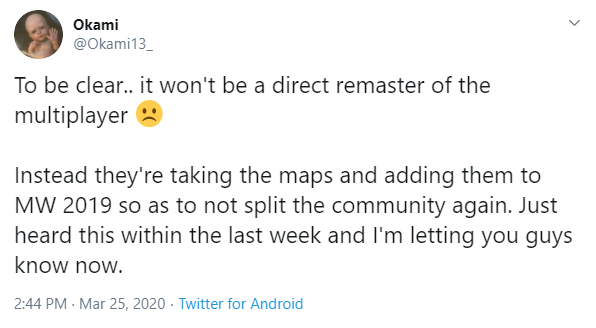