Valorant will offer a full Ranked system called ‘Rated’ which went live on 29th April in patch 0.49. Here's how it works.

Valorant is here and we have plenty of details about ranked play.

This new mode, where true competitors will flock, is called "Rated" and after a small delay has now arrived.

Perhaps unsurprisingly, Riot has taken elements from its very popular League of Legends ranking system when plotting out Valorant's, and that's no bad thing.

The ranked mode is called ‘Rated’ and it went live 29th April with patch 0.49.

Here's our guide to the ranks.

Valorant is already offering Ranked Play as part of its early playtests, with 22 ranks in total split between 8 titles (which we've listed below).

We don't know how you'll jump ranks yet but expect to need to go through the 'Promo Games' that League of Legends uses to qualify for rank increases.

Riot's Ian “Brighteyz” Fielding wrote a blog post on April 24 explaining how Competitive Play will be heading to Valorant with patch 0.49.

"Valorants Competitive mode uses the same in-game rules and format as the Unrated mode, but with a focus on higher-stakes competition," Brighteyz revealed. "Valorant's competitive system is still in its early stages, and we plan to evolve it over time, but we have a core experience we wanted to share with you all in closed beta so that we can build and evolve the mode together."

Ranked has now been out for a few weeks, and although it is not perfect; Riot seems committed to improving the system.

Recently signed G2 Esports player, M1xwell; posted a tweet noting that Ranked should have an Elo System like League of Legends.

This triggered a response from Valorant's Game Director Joe Ziegler, which he notes they are working on a system like this for the future!

We’re working on plans for something like this but don’t have an ETA. Definitely interested in giving players a chance to see who’s the best of the best.

If League is anything to go by, VALORANT’s ranking system could have year-long seasons divided into three splits, each lasting three months.

We already know that a Battle Pass is coming in Valorant, so could this tie into the seasonal progression? Could we see seasons only span a matter of week?

Players may earn League Points for winning games as they progress through ranks and be rewarded at the end of a season.

All Confirmed Ranks And Badges

Riot has recently decided to change Valorant's top rank from Valorant to Radiant.

A number of Reddit threads were made encouraging Riot to change the name of the of rank during the beta.

Radiant will be the only rank with a single tier.

The ranks are as follows:

You can also check out the badges below: 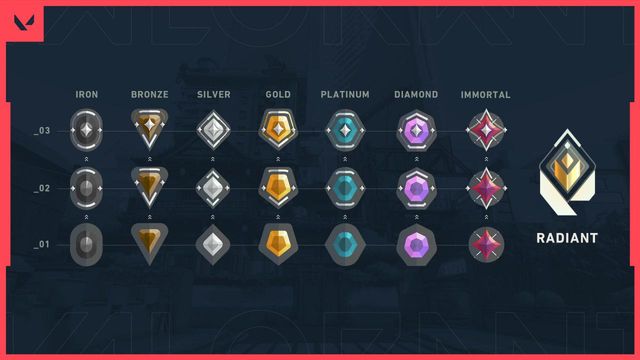 All ranks except Radiant offer three sub-ranks, so don't expect to hop between them too quickly.