Here we go over the Serie A TOTS predictions for the squad of 23 players we’d expect to see released into packs, as well as a handful of players that could feature in SBCs and Season Objectives.

Serie A Team of the Season Prediction

Here are our picks for the FIFA 20 Serie A Team of the Season 23 man squad. 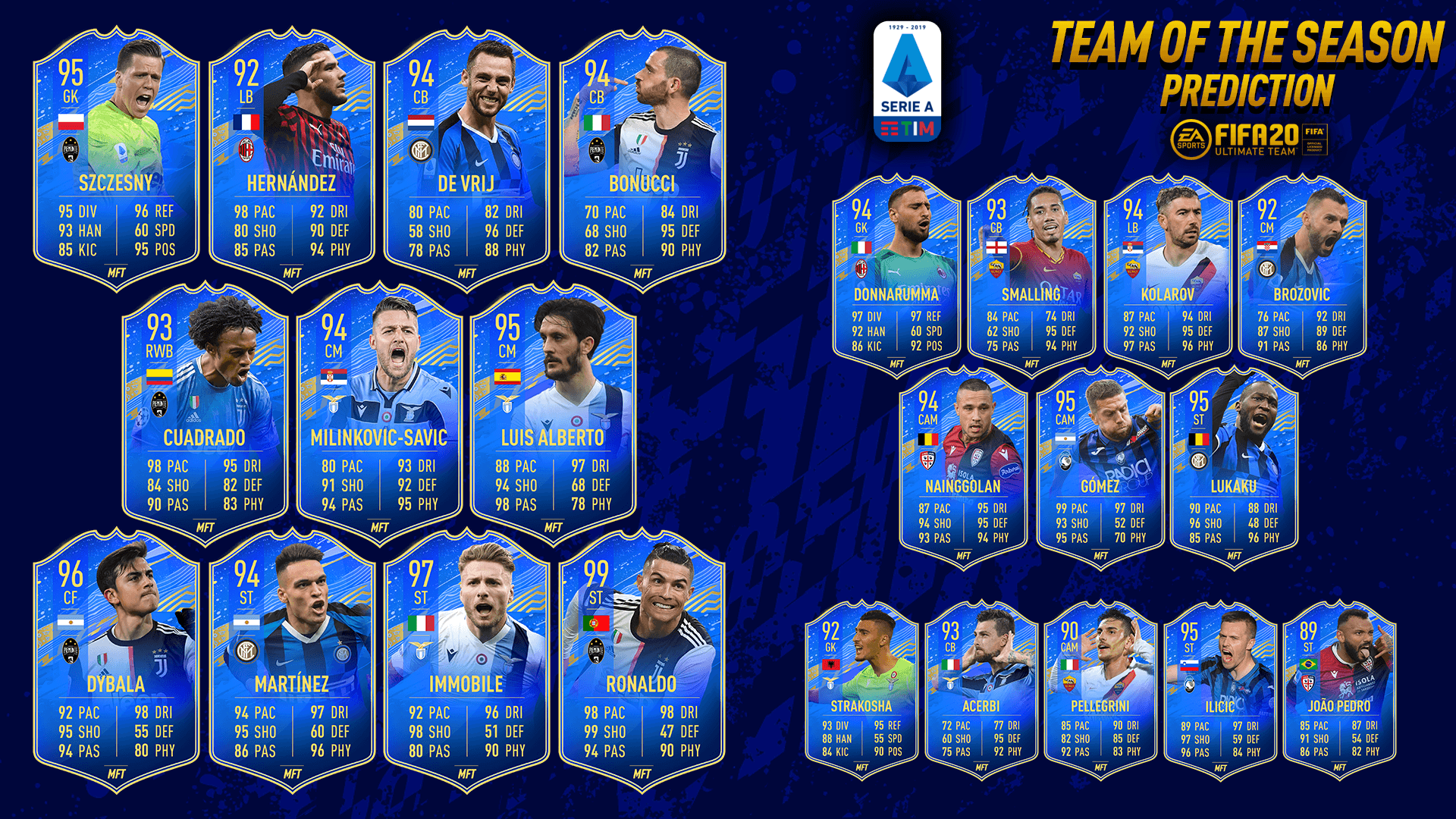 The GK spots were very difficult to choose this season, however I’ve opted for Szczesny for the starting spot. With 8 clean sheets in 19 games, and only 17 goals conceded, the Juventus GK has a strong case for a TOTS this year.

Milan’s main man this year, with 5 goals and 2 assists, the most goal contributions for The Rossoneri. Hernandez, alongside Kolarov will be the two LBs featured this year, and he has the potential to be one of the more meta LBs in FUT.

There were a number of CBs that could’ve featured in Serie A’s TOTS this year, but I fancy De Vrij for one of the starting spots. With 2 goals, 3 assists and a solid 7.00 WhoScored rating, he gets our vote.

Juventus feature heavily in the TOTS this year, with Bonucci getting a starting CB spot. Having played in all but 1 of the league leaders' league campaign, he’s been a key figure in a solid defense, and has also contributed 3 goals.

As far as RB/RWB spots go, there weren’t too many options to choose from, however Cuadrado has had an impressive season playing a slightly deeper role for Juventus.

Lazio have been a goal scoring machine this season, with their 4 attacking players doing the majority of the work. Milinkovic-Savic currently has 4 goals and 4 assists, as well as 5 MOTM awards, more than enough to secure a TOTS spot.

The league leader in assists this season, Luis Alberto has been Lazio’s main playmaker, with assists for Ciro Immobile and Joaquin Correa being the leading combinations in Serie A this season. What a card this will be!

Despite no longer being the main man at Juventus, Dybala has still had an impressive season in the attack, contributing 7 goals and 4 assists.

The Belgian has well and truly rediscovered his goal scoring ability with his move to Italy, grabbing 17 goals this season for Inter, and will no doubt be receiving a TOTS item.

Immobile has yet again ripped up the league with goals this season, scoring 27 goals in only 25 appearances for Lazio. With 7 assists registered as well, with 8 MOTM awards, expect a massive boost to his card, making him one of the most clinical strikers this year.

No doubts here, CR7 is set for yet another TOTS, and yet another 99 rated card. 21 goals, the most MOTM awards in Serie A, he’ll yet again be one of the best cards in FUT.

The Milan GK has gone from strength to strength again this season, picking up 10 clean sheets in Serie A, as well as 2 In-Form items in FUT. He should make up another GK spot in the Serie A TOTS.

Smalling’s loan to Roma appears to have done him the world of good, being rated as their 4th best player this season by WhoScored, as well as receiving a Headliner card in FUT20.

The veteran LB has yet again proven that he’s still got it, racking up an impressive 6 goals and 3 assists for Roma this season, with most being from set pieces.

The Croatian midfielder has been a very underrated player for Inter this season, having contributed 3 goals and 5 assists from midfield. Expect him to be a very well rounded TOTS item.

The Belgian beast is set to have one of the best overall cards in FUT this year with an incredible TOTS item, after grabbing 5 goals, 6 assists, and 4 MOTM awards in Serie A this season.

We couldn’t possibly ignore Gomez for a spot this year. 6 goals and 10 assists for the Atalanta captain will secure him a blue card this year.

Despite already having an end-game Future Stars item this year, expect Lautaro to get an even better TOTS card. With 11 goals in the league, he could sneak in just ahead of Duvan Zapata.

The Albain keeper has had an impressive season, with 9 clean sheets in Serie A, and could easily make it into TOTS as a 3rd GK choice.

In the centre of the Lazio defence this season, Acerbi has been a vital player, with the highest pass percentage, 2 goals, 2 assists, and 9 clean sheets thanks to his defensive efforts.

The 23 year old midfielder has been Roma’s key playmaker this season, with 8 assists registered. This will be a really nice, budget item for your FUT squads.

The 32 year old has been Atalanta’s main man up top this season, with an impressive 15 goals and 5 assists, as well as 7 MOTM awards this year in Serie A. Despite strong competition from other strikers, we still fancy his chances of getting in.

The final selection for the Serie A TOTS squad, is Cagliari’s Joao Pedro, who’s had an awesome season, scoring 16 goals in the league.