Modern Warfare: Nadeshot Calls Out Devs Over Skill Based Matchmaking In Call of Duty: Warzone

Nadeshot calls out Call of Duty devs for spending their time on skill-based matchmaking rather than a ranking system.

Skill-based matchmaking seems to be the trend in top competitive games these days and it's not always warmly received, especially when games like Modern Warfare lack a real ranked mode.

Nadeshot took to Twitter to call out Call of Duty devs regarding matchmaking and ranking systems.

The 100 Thieves CEO wasn't holding back when he took to Twitter in the early hours of Wednesday morning. He asked why devs go through so much hard work to implement skill-based matchmaking rather than implementing a ranking system.

"I'll never understand why Call of Duty goes through all of the trouble to implement skill based matchmaking but won't add a ranking system. If you're going to match me up against better players, why can't I have a rank to be proud of and work towards?" 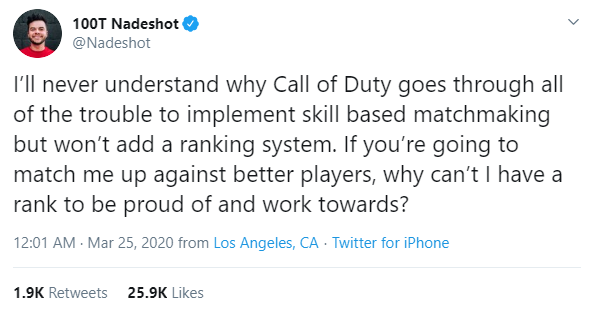 Shroud also chimed in saying: "Idk, random thoughts talking general BR modes. SBMM doesn't work and ranked also doesn't work IMO. It's a BR at the end of the day maybe it is just best as a dev to try to do your best to balance everything in one and leave it at that."

Many YouTubers, such as Dift0r and TheXclusiveAce, have tested Modern Warfare to see if it possesses this feature - the results provided strong evidence that it does, but the connection is still prioritised.

Skill-based matchmaking has always been a hot topic within casual gaming, especially when most games feature a dedicated competitive mode.

Many fans argue that the fun of Call of Duty is taken away when skill-based matchmaking is thrust upon the player.

Could this be in reference to Warzone? Developers have claimed that there is no skill-based matchmaking, but others are starting to feel this isn't the case.

In a recent Warzone tournament, Nadeshot teamed with CouRage and Cloakzy dropping 40+ kills before finding themselves quickly struggling as time went on.

While Warzone is new and released in the middle of Season 2, it can be forgiven that there are no ranks or a ranked mode. But, just like with Modern Warfare's multiplayer, this will only fly for so long.

The CDL playlist was a nice touch, but with no real ranking system, it hardly seems worth the grind. Perhaps Season 3 will introduce big changes to the game mode and ranking system.