Here we go over the Bundesliga TOTS predictions for the squad of 23 players we’d expect to see released into packs, as well as a handful of players that could feature in SBCs and Season Objectives.

Bundesliga Team of the Season Prediction

Here are our picks for the FIFA 20 Bundesliga Team of the Season 23 man squad. 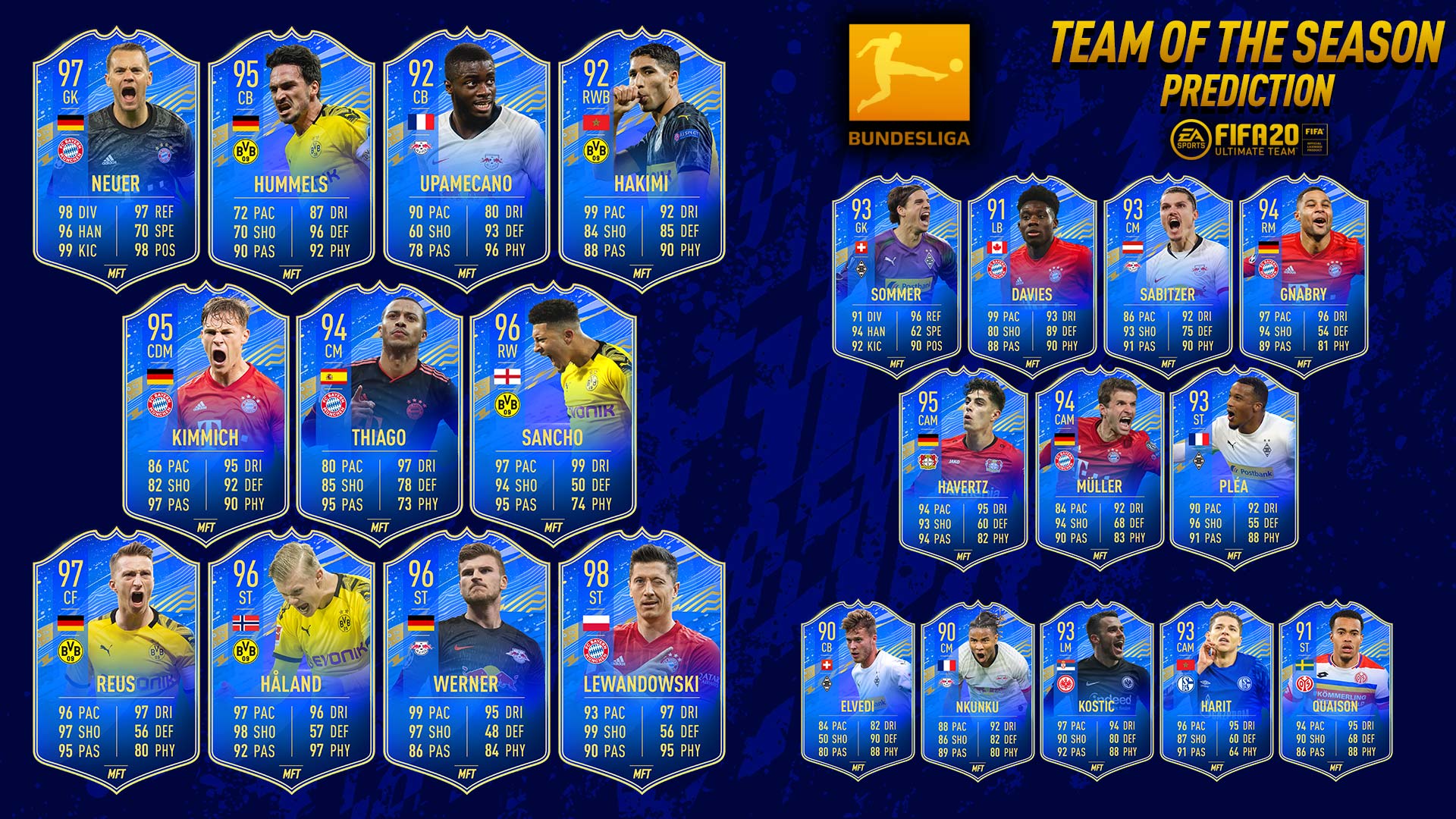 With 15 clean sheets this season, 10 of those coming in the Bundesliga, Neuer looks set to be the favourite for the starting GK position for this TOTS.

CBs were tricky to decide this year in the Bundesliga, however Hummels has been a key figure in the Dortmund defence that have kept them well in contention for the title.

Rated as one of the best performers on average for the season by WhoScored, Upamecano has been a rock in that Leipzig defence that have taken the league and Champions league by storm so far.

The Moroccan full back has had a sensational season in the Bundesliga, racking up an impressive 10 assists from his advanced full back position.

Having taken after Philipp Lahm in moving from RB to CDM, Kimmich has gone from strength to strength this season, locking down the Bayern midfield, while contributing 2 goals and 4 assists in the league.

Partnered with Kimmich, Thiago has looked solid this season, and is rated as Bayern’s 3rd best player this season by WhoScored, narrowly behind Gnabry and Lewandowski.

Only 19 years of age, yet Jadon Sancho is quickly turning into one of the most talented young stars in world football. 14 goals, 15 assists and 6 MOTM awards are some of the best returns in the entire league, and set him up for an incredible TOTS card.

Another impressive season from Marco Reus, with 16 goal contributions to his name, as well a Headliner card in FUT. Get ready for an amazing TOTS item.

This must be some sort of record for FUT. Having only started 5 games in the Bundesliga, the Norwegian wonderkid still has 9 goals this season. He surely gets a TOTS item for his breakthrough.

Leipzig’s main man hasn’t disappointed this season, returning 21 goals and 7 assists this season in the league, as well as the most MOTM awards (8). Expect an incredible TOTS card with 99 pace.

Still well in his prime, the 31 year old has again proved he’s one of the best forwards in the world, with 25 goals in 23 Bundesliga appearances for Bayern.

At the current time of writing, Yann Sommer has the highest total saves in the Bundesliga, with 90 in 25 appearances. With 5 clean sheets in the league also, he should be taking the 2nd GK spot in the Bundesliga TOTS.

The Canadian youngster has had an epic breakthrough season for Bayern in a slightly deeper full back role. Rated highly as one of the best defensive players in the league, Davies’ TOTS card should be very popular.

The Austrian playmaker has been pivotal to Leipzig this season, contributing 8 goals and 5 assists from his midfield role, enough to secure him a spot in the TOTS.

The bane of the London clubs in the Champions League this season, Gnabry has been a standout performer for Bayern, totalling 20 goal contributions this season, as well as 7 MOTM awards.

While Leverkusen sit just outside the top 4, we can’t ignore Havertz’s contributions to their team. 6 goals and 5 assists from his CAM role should be enough to secure the 20 year old a TOTS spot.

It wouldn’t be a Bundesliga TOTS without Thomas Muller in it, and with his 16 assists being the highest in the league, there’s no doubt that he’ll be in the running to receive yet another blue card.

With 8 goals, 7 assists and 3 MOTM awards in the Bundesliga, as well as a Headliner card to his name in FUT, the Frenchman should be set for a TOTS.

A key figure for the Gladbach defence, the Swiss 23 year old would be a solid TOTS option for cheap.

The 22 year old midfielder has had one hell of a season for Leipzig, assisting 12 and scoring 4 in the league, with 4 MOTM awards to his name.

Frankfurt’s main man this season has carried them this season, with 4 goals, 8 assists and 5 MOTM awards, and should be set for a well rounded TOTS item.

With a POTM item already to his name, as well as 6 goals and 4 assists, Harit could have an outside chance of securing a TOTS card.

The Swedish attacker has been prolific for Mainz this season, bagging 12 goals for his team, enough to bag him a TOTS item. 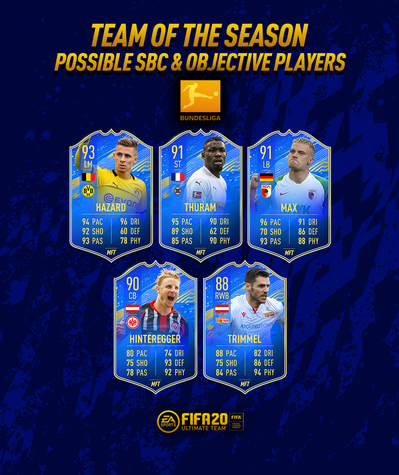 Valorant: How to download the beta, where to get a beta key and play now!

Valorant: How To Control Recoil And Weapon Spray Patterns Guide