F1 2020 has officially been announced as the next game from Codemasters.

With F1 2019 arriving two months ahead of its usual schedule, it was a resounding success with a brand new career mode and the addition of the 2018 & 2019 F2 seasons.

This game will release on PS4, Xbox One and PC - with the Xbox Series X and PS5 likely to follow.

Alongside the well-established career mode of the F1® games, you’ll be able to experience F1® 2020 as a driver-manager, and it’s going to offer you a unique insight into the world of F1®!

That’s not all though. Whether you’re playing ‘My Team’, or our traditional Career mode, we’re giving you more flexibility with your season lengths, and you’ll be able to choose between the original and full 22 race season (including Hanoi Circuit and Circuit Zandvoort), or shorter 10 or 16 options.

The career mode in F1 2019 took a big step forward with the introduction of F2 and a feeder set of races with two rivals that followed you up to F1.

It looked beautiful and played well, it was a really immersive experience that we hope will continue to engage the user.

For social play with friends, two-player split-screen makes its welcome return, so you'll be able to show off those skills against your sibling or fight for first place with your friends.

We're also adding a host of different options designed to help those of you new to F1® games and adjust the challenge to match your expertise.

These modes are in addition to the core F1® and F2™ racing experiences which remain as challenging as ever for those who love the intensity of simulation racing.

What Needs To Change

Last year's gameplay looked incredible and there's no doubt it will look even better.

A few bugs and issues will no doubt be smoothed out going into the new version of the game and the F1 2020 handling model will take a leap forward.

It would be good to see the user interface and HUD changed to be less busy. The deployment of ERS, changing of engine modes and other settings are very complicated and tricky to do effectively.

Codemasters need to make a decision if they want to leave everything at the driver's fingertips or delegate some decisions, like ERS management, to the pit wall like in real life.

Online multiplayer is very fun when it works and is adjudicated properly - unfortunately, it is plagued with reckless drivers who do not adhere to the rules.

It would be great to see a more rewarding system for following the rules and harsher punishments for those who don't follow the rules.

Four new cars have been confirmed including:

We'd love to see more classic cars brought into the game as well as more customisation for our online races.

Codemasters should at least take a look at some of the less-successful but still notable cars from F1 history. The six-wheeled Tyrrell or 1978 Brabham “fan car” would be welcome additions to the current crop Codemasters have.

In an ideal world we would get Imola, Turkey, and classic versions of Silverstone, Hockenheim and Spa too - perhaps this could be DLC?

With the Deluxe Schumacher Edition of F1® 2020, you'll get to drive as the legendary German driver Michael Schumacher himself in four of his most iconic cars (which you can check out below!)

The four cars included in the F1® 2020 Deluxe Schumacher Edition are:

Not only that, to celebrate the Seventieth Anniversary of Formula 1® itself, if you pre-order or purchase the Schumacher Deluxe Edition or the ‘F1® 2020: F1® Seventy Edition’ will receive an exclusive set of in-game items. A Limited Edition F1® 2020 Steelbook will also be available in local markets via selected retailers. 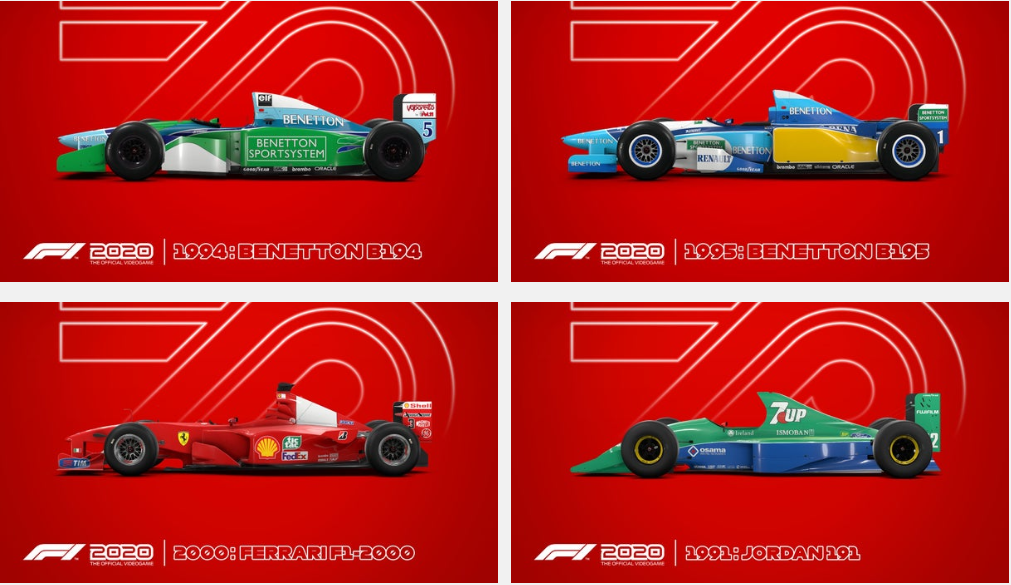