What is TOTW Moments in FIFA 20? Here's what we know.

TOTW Moments is the new concept to help counter-act the recent COVID-19 pandemic hitting football leagues around the world.

Although there's little for EA to work with in terms of a TOTW in FIFA 20 Ultimate Team, it hasn't stopped their creative juices, even if the TOTW has become stale.

The prospects of TOTW Moments becoming a thing is exciting and has a very familiar FUT Birthday feel to it, which release this Friday.

Following the suspensions of most major league around the world, EA has decided to suspend the normal TOTW and replaced it with TOTW Moments.

This is a recurring program that will be based entirely on a historical TOTW release from past FUT titles - a nice segway into FUT Birthday.

Each squad will reflect a specific TOTW from the past on the same gameweek in the past.

All players that will be released will reflect their current teams and their OVR increase will be in line with their FUT 20 upgrade path.

All information can be found here. 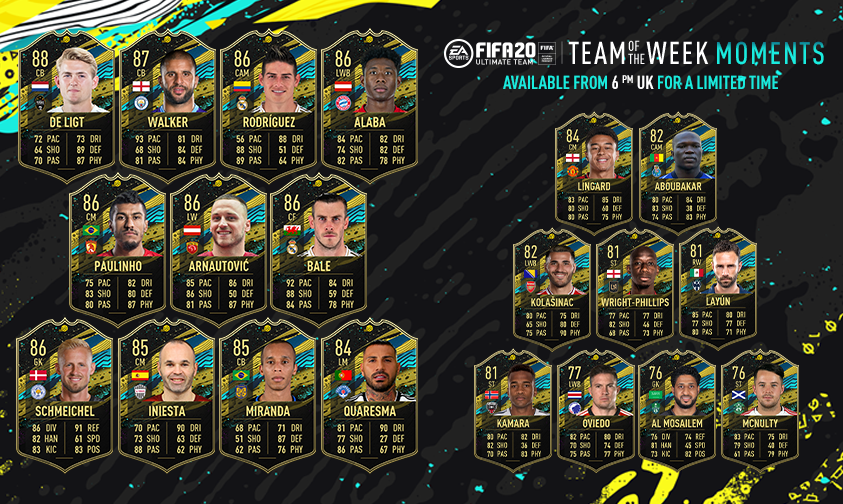 TOTW Moments will replace TOTW in multiple places across FUT starting today, Wednesday, March 18th. This includes, amongst others:

To ensure that Live Items continue to be valuable to players when building their squads, they'll also be upgrading Ones to Watch and Headliners Live Items based on if they are released in a TOTW Moments squad.

As players with dynamic Items are selected for TOTW Moments squads, they will receive upgrades accordingly.

When the regular football calendar resumes, Ones to Watch and Headliners Items will continue to receive upgrades as they would have done previously.

How Does This Impact Other Cards?

Player of the Month Award SBCs

The majority of the February Player of the Month awards will be released in-game as planned. Looking ahead to future months’ awards, we’ll work with each league to determine the right time to bring back the POTM SBCs in FUT 20.

Man of the Match Items

Man of the Match Items for Domestic, UEFA and CONMEBOL cup competitions will be paused until the respective tournaments resume.

When will the changes to TOTW occur?

Starting Wednesday, March 18th, 2020, and until the regular football seasons resume, TOTW will be replaced with a Weekly Squad of TOTW Moments players.

How will this affect my FUT Champions rewards Player Picks?

Why are certain players not featured in a respective TOTW Moments squad?

Can I use TOTW Moments in Squad Building Challenges?

Yes. TOTW Moments will replace TOTW content and operate in the same way. Future SBCs and Objectives may require either TOTW or TOTW Moments items. We are also currently working to update the requirements of relevant active SBCs to reflect this change.

How will the TOTW Moments impact my dynamic Items?

Ones to Watch and Headliners players will continue to receive upgrades if they are selected as part of the TOTW Moments squad for that week. Headliners win streak upgrades will be paused until the 2019-2020 season resumes.

What will happen to new TOTW packs I get as FUT Champions rewards and/or from SBCS?

From Thursday 19th March @ 9am GMT onward, and until the football seasons resume, the TOTW packs earned from FUT Champions will be replaced with TOTW Moments packs. Similar to the usual TOTW packs, when opened, these packs will contain the current active TOTW Moments players.

How do TOTW Moments work with the FUT Champions Upgrade SBCs?

What will happen to my existing TOTW packs?

Existing Team of the Week Packs (TOTW Upgrade, Ultimate TOTW Pack, Premium TOTW Pack) will continue to include Player Items from TOTW 26. If we are able to reintroduce TOTW later in the year, these packs would then update to use the active TOTW as per usual.