As we get nearer and nearer the expected FUT Birthday Promotion in FIFA 20 Ultimate Team, it’s time to start looking at some potential players that we could be seeing in FUT’s next big promo!

As the FUT Birthday Promotion arrives this Friday in FIFA 20 Ultimate Team, it’s time to start looking at some potential players that we could be seeing in FUT’s next big promo!

While TOTW Moments may have taken a bit of the shine off the event, FUT Birthday is always a great and creative promo.

Here are some of our picks that we’d like to see included in FIFA 20’s FUT Birthday Promotion. 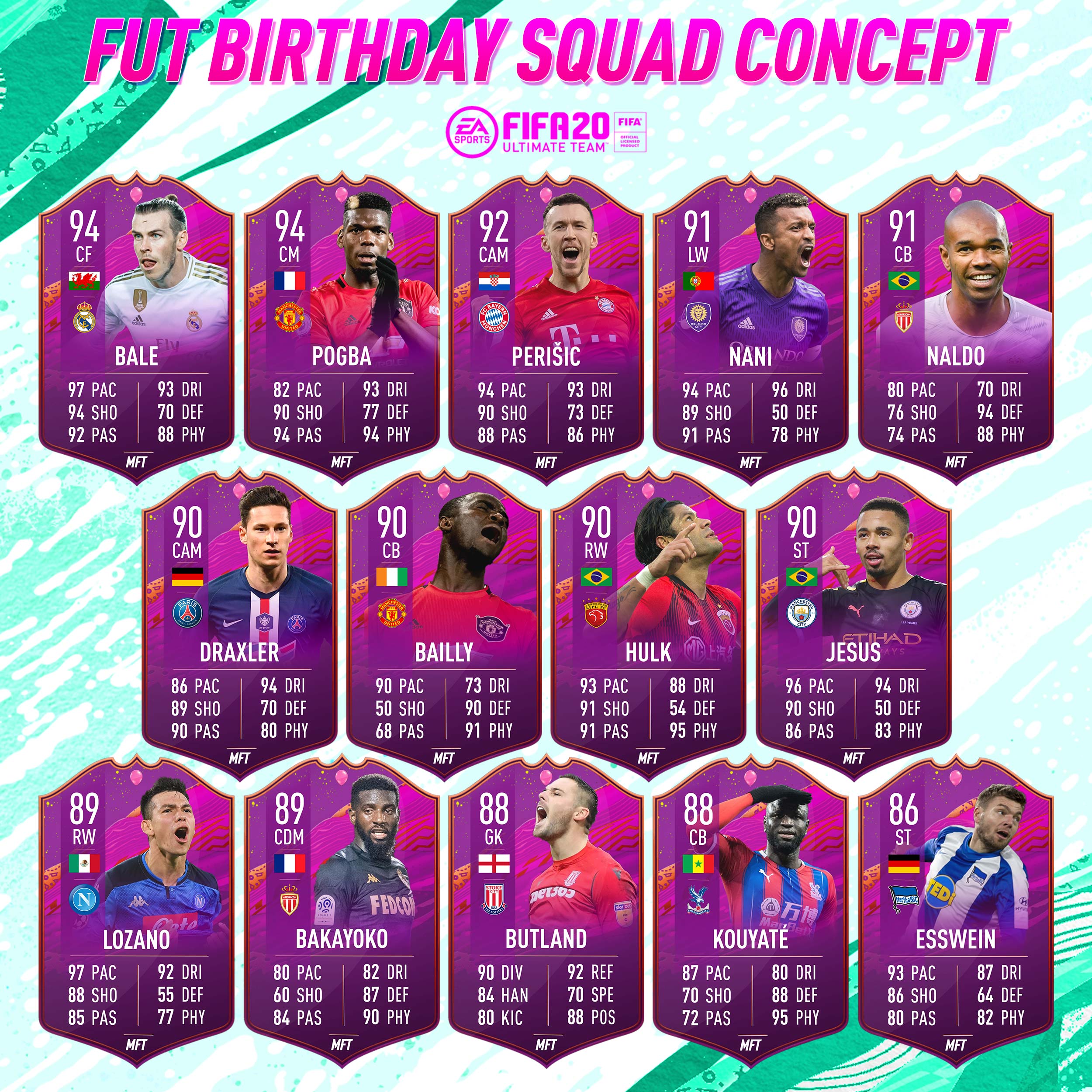 There’s no doubt that in previous FIFAs Bale has been a standout fan favourite.

With his pace and technical ability, he’s fit nearly all metas year in year out, and with the lack of a significant upgrade this year, FUT Birthday may be the time for EA to fulfil his potential.

Unfortunately, Pogba has spent most of the season out injured, resulting in no upgrade whatsoever for his card.

However, FUT Birthday may be the opportunity for an upgrade, with Pogba being a very popular player year in year out.

Perisic shot to popularity in FUT between FIFA 16 and 18 thanks to his pace, 5* weak foot and technical ability.

Now playing for Bayern, a CAM Perisic for FUT Birthday would certainly change up the meta in the Bundesliga.

The Manchester United legend, now playing in the MLS, was one of the most popular wingers in FUT between FUT 11 and 13.

From FIFA 10 until around FIFA 16, Naldo was one of the top CBs around in FUT, having pace coupled his 6’6” frame making him a threat both defensively and going forward.

With a rocket of a long shot also in his locker, we’d love to see Naldo return to his former glory with a big boost!

Draxler shot to popularity back in FUT 14 with his 80 rated non-rare item for Schalke. With 4* Skills and 5* Weak Foot, he was a monster at CAM in non-rare gold teams.

A Draxler for FUT 20 with boosted stats would certainly go down well!

Since his introduction into FUT16, Bailly has been a popular CB choice thanks to his pace, plus his Manchester United links.

FUT Birthday this year would be a great opportunity for him to get a big boost to his card, with a massive pace boost making him one of the meta EPL CBs.

If you’re a true FUT fan, you know about Hulk. From FUT 10 all the way through to FUT 16, Hulk was one of the most meta cards in the game thanks to his rocket of a left foot and tanky build.

Despite already having seen a Hulk SBC released through Ultimate Scream, we want to see Hulk return as an even higher rated card in FUT Birthday.

Following his arrival into FUT in FIFA 17, Jesus has been one of the more popular EPL strikers for those on a lower budget.

We’d love to see a boosted version of Jesus with tonnes of pace to represent his earlier FUT cards.

Lozano only really became a truly popular card back in FIFA 18 Ultimate Team, after receiving a tonne of super overpowered low-end IFs for PSV.

After a couple of solid seasons in Eredivisie, he transferred to Napoli, where he could get a FUT Birthday item for his impressive cards in the past 2 years.

Another relatively recent card to break through and cement themselves into the FUT history books.

Bakayoko became one of the most overpowered cheap CDMs back in FIFA 18, with the community brandishing him as the cheap Kante, with his French, Chelsea links.

Quite arguably the most overpowered GK to ever grace the pitches of Ultimate team. Jack Butland back in FIFA 17 caused more broken controllers than any other GK.

Being only 82 rated, he was the cheapest, but one of the best GKs in the game, and deserves a FUT Birthday item to recognise his performances in FIFAs past.

Kouyate’s most popular FUT item came back in FUT 13, when he was still playing for Anderlecht in the Belgian Pro League.

Released as a 74 TOTS item with 87 pace, being 6’3”, Kouyate was one of the most expensive items in the game, as a silver CB.

Oh Esswein. For those that didn’t play FUT13, say hello to one of the OGs.

Esswein only had 70 shooting and 3* skill moves, but that didn’t stop him playing like a Prime R9 in every game we faced him in. Esswein, we salute you.