Pokemon GO: Fighting In The GO Battle League Against Certain Players Could Net You A Big Reward

Pokemon GO has a lot going on during March, as well as extending events due to coronavirus and keeping limited Pokemon in the mix until you can safely walk amongst strangers again. The latest in Pokemon GO updates regards the GO Battle League and it's a big one!

Playing the GO Battle League from now until March 16th 9:30 GMT, you could stumble across one of Niantics accounts (all names listed in the picture below).

If you happen to find one of these names, whether you win or lose, you can post a screenshot of the battle on either Instagram or Twitter with the hashtag #GOBattleWithNiantic, to be entered into a draw to win 8 star pieces!

The star pieces will be awarded to the winner by March 20th whether the player obliterated their opponent or got destroyed themselves (we think you should get more if you win).

The list of names is pretty big, so expect quite a few players to be entered into the draw. It's worth mentioning that the screenshot needs to show both trainer names in the battle to count.

The names can be seen below. 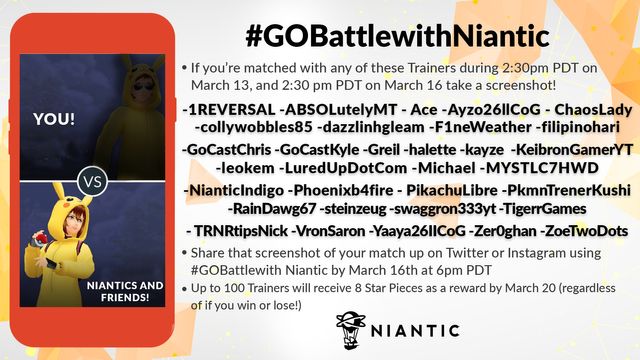