Here we go over the La Liga TOTS predictions for the squad of 23 players we’d expect to see released into packs, as well as a handful of players that could feature in SBCs and Season Objectives.

Here are our picks for the FIFA 20 La Liga Team of the Season 23 man squad. 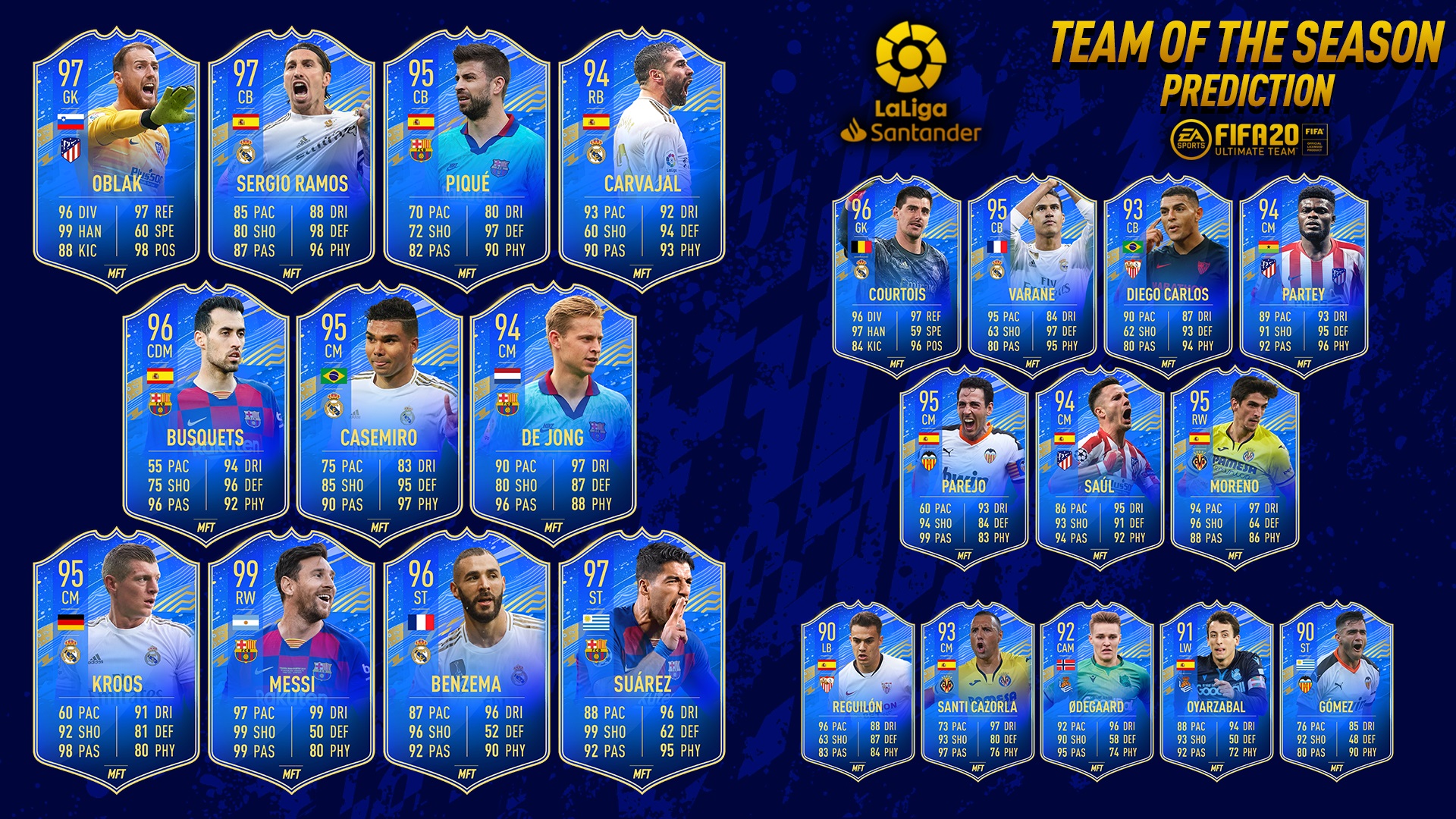 Being possibly the best goalkeeper in the world at the moment, with 11 clean sheets in La Liga and only 21 goals conceded, Oblak is a certainty for this years’ TOTS squad.

With 13 clean sheets this season, and a number of goals to his name, Sergio Ramos is set for yet another TOTS card in FIFA 20.

Another solid season from Pique, keeping a number of clean sheets this season, as well as being the leading defender for passes completed this season. Expect a well rounded 95 rated card.

By far the best RB this season, racking up 5 assists and 3 MOTM awards from RB for Real Madrid. He makes it into WhoScored’s top 10 players of the season so far in the league.

Such an underrated player in the Barcelona team for many years now, Busquets looks set to feature in the TOTS, with the most passes completed in the league by far.

Casemiro has been a rock in midfield for Madrid, amassing the most tackles and interceptions in the league by a mile, surely enough to secure him a spot in TOTS.

After securing a TOTY item, De Jong has had a solid season for Barcelona, picking up several goals and assists, and a couple of MOTM awards. While there is strong competition from other midfielders in La Liga, I fancy his chances of sneaking into TOTS.

Kroos has had a very strong season for Madrid, with a 93.6% pass percentage, the highest in the league, as well as 3 goals, 5 assists and 2 MOTM awards.

Not much that needs to be said here, it’s Lionel Messi. Most goals, most assists, most MOTM awards, 99 OVR, job done.

14 goals and 6 assists so far for the Frenchman means he’s the 2nd highest goalscorer behind Messi, and with 7 MOTM awards, he’s guaranteed to secure a striker spot in this La Liga TOTS.

Despite his injury, Suarez has still been one of the most prolific goalscorers this season, with 11 goals and 7 assists in just 15 starts.

Certainly in contention as the best GK this season with Oblak, Courtois has 12 clean sheets in La Liga this season, with only 16 goals conceded.

A solid season for the French CB, with 2 In-Forms and a Headliner card to his name in FUT. With mid 90’s pace predicted, this will be one of the best CBs in FUT.

Heavily linked with big clubs, Diego Carlos has been a solid defender for Sevilla this season. With high pace and solid defending/physical, this TOTS card could be epic!

An absolute rock in the centre of the Atletico midfield, Partey has been influential, picking up 3 MOTM awards for his defensive efforts this season in La Liga.

Valencia’s player of the season by far, with 8 goals and 3 assists, along with 6 MOTM awards, Parejo should sneak into the TOTS alongside a tonne of high performing midfielders.

Rated as Atletico’s best player this season by WhoScored, with 4 MOTM awards and a Headliner card this year, I’d be surprised if Saul didn’t make the cut for TOTS.

The 27-year-old Villarreal winger has been in fine goalscoring form this season, with 11 goals to his name, and is currently the 7th highest rated player on WhoScored this season. A TOTS is in the pipeline for him.

A solid season for the 23-year-old on loan from Real Madrid, who’s contributed to 5 goals this season, and is rated as Sevilla’s 2nd best player this season behind Lucas Ocampos.

The Norwegian has well and truly found his feet in La Liga this season, playing a vital part of the Sociedad squad currently chasing Champions League football. With 9 goal contributions so far and a Future Star item already in FUT, his TOTS item could be insanely good!

The 2nd Sociedad player to feature, Oyarzabal has been in fine form, grabbing 8 goals and 6 assists, along with 3 MOTM awards, making a solid case for a spot in TOTS.

Unfortunately this season the striking options have been somewhat limited, meaning Maxi Gomez could sneak into the team, despite only grabbing 9 goals this season so far.