THE LAST OF US PART 2 COUNTDOWN LIVE: Latest News, Updates, Leaks And Rumours For TLOU2

The Last Of Us 2 is coming soon – and we're counting down to its release date by covering the latest news, updates, leaks and rumours right here.

The Last of Us 2 is coming, with Naughty Dog's post-apocalyptic follow-up landing exclusively on PlayStation 4. It was initially set for a February release, before being postponed to May 29 – We're now looking at June 19th! Hopefully, the date doesn't move again.

With Joel and Ellie both returning, their next chapter is likely to be an emotional story set in a brutal world that is trying to rebuild itself.

We'll be updating this piece with new information as we get it, so be sure to keep checking back.

Don't forget to grab a TLOU 2 theme for your PS4, courtesy of codes in this tweet from Naughty Dog.

Our new The Last of Us Part II Duality theme shifts between night and day based on your PS4's clock. Get it for free by using these codes on @PlayStation Store:

For those who do not know, players are able to pre-load The Last of Us 2 now!

This means when the game releases this Friday, you do not have to wait to download it.

Reviews Are Piling In - 13th June

With just one week to go until the release of The Last of Us 2, publications around the world are starting to release their reviews of the game.

It is safe to say we are in for a treat. Check out all the scores sites have been giving the game below! 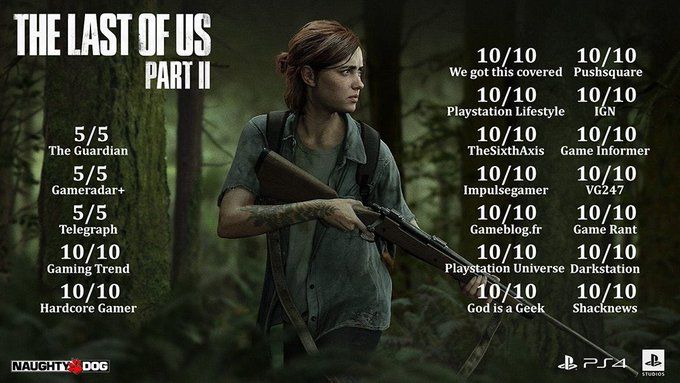 If you thought those leaks could slow down the hype train for TLOU 2, you'd be wrong - at least in Brazil.

It has surpassed God of War's preorder figures, and was already tracking more positively than Marvel's Spider-Man in Europe, too.

Will It Be Delayed? - 7th June

We highly doubt The Last of Us 2 is going to be delayed within the next two weeks.

However, with the on-going protests around the world and the recent acts of game publishers delaying all of their new content.

One can never be too sure.

"The Ending Is Not Out There" - 6th June

Neil Druckmann who is the director of The Last of Us 2 spoke to EuroGamer the other day, and had this to say regarding the massive leaks that surfaced a while back.

A new gameplay deep dive has shown more about Jackson and Seattle, two key locations in The Last of Us Part 2, as well as the factions at war.

No spoilers here though!

With the global launch of Naughty Dog's - The Last Of Us 2 just a mere 17 days away. We provide this update today to warn you about some possible leaks for the game, that if prove to be true, would spoil some of the major Ellie twists.

The plot of the storyline of the original game featured hugely controversial points that made fans hooked and eager to find out what Naughty Dog are hiding up their sleeves.

These recent leaks threaten to compromise the gripping plot of the next Playstation 4 exclusive, and while we don't know too much about the mysterious storyline (from what has been shown in the recently released trailers), we can gather that The Last Of Us 2 will feature plot points that could live up to being more gruesome and traumatic than the original.

We will not say too much more on the matter, but if you're a big fan of the game and are planning on picking up the sequel, we'd advise staying away from any forums about the game.

In a New Exclusive interview with The Verge, the Developers at Naughty Dog who will be Launching the sequel to the much anticipated Game Series – The Last Of Us 2, spoke today about how the New Title features a large amount and varied accessibility options.

They stated in the interview: “There are around 60 different accessibility options in the game’s menu, covering things like controls, visual aids, audio clues, navigation and traversal, and combat. Some are fairly standard features, like being able to make the UI larger or tweak the subtitles for colour blind users. Other elements are much more involved.”

They went on further to say: “There’s a text-to-speech option that reads out everything in the game, from menus to the notes Ellie picks up on her journey, and audio cues to indicate when there are items nearby or a ledge you can climb up. A new high-contrast mode changes the visuals entirely for low-vision players, rendering the world a light grey, and turning allies blue and enemies red. You can even use the PS4 Dual Shock controller’s touchpad to zoom in and get a closer look at the world.

You can read the full interview here.

It’s great to see how Naughty Dog will be catering to the needs of their fans in the New Title that launches in less than 3 weeks from now.

Naughty Dog has announced a new release date for June 19th, putting it three weeks behind the initial release date of May 29th. The Last Of Us Part 2 Countdown

Looking for everything we know so far about Naughty Dog's epic? Look no further than our Last Of Us 2 hub.