Pokemon Mystery Dungeon DX has some similar mechanics to past Pokemon games but also plenty of new ones. Here's everything you need to know about attacks, items, abilities, and type matchups.

Pokemon Mystery Dungeon Rescue Team DX is perhaps the most unusual Pokemon spin-off series of all time, although the mechanics are fairly similar.

You play as a Pokemon and alongside your partner Pokemon, you are set out on a task to rescue all those that need saving.

This is where interest is lost for a lot of fans; it can be hard to follow along with the game and the combat is the same throughout the game.

Nevertheless, since it is a Pokemon game, after all, there are some core components that fans should take note of before playing.

Let's go over all the basic game mechanics of Mystery Dungeon DX!

Opposed to the standard Pokemon game where each Pokemon has specific EVs or IVs, Pokemon in the Mystery Dungeon series simply have base stats.

These stats can be altered with supplements such as Gummis, health drinks, Sitrus Berries, and various other consumables.

One of the most important base stats to take into consideration is your Pokemon's Travel Speed - this determines how fast it can move in a dungeon and may be essential if you are in need of a quick escape! Evolution does not occur as it does in the traditional Pokemon games, instead, it must be manually done and can be a strange process if you do not research beforehand.

Another weird note about evolution with Mystery Dungeon is that just because you are evolving your Pokemon does not mean it will be stronger.

Pokemon do not get stronger but can learn new moves not previously available.

Much like any other Pokemon game, the standard Pokemon type matchups are in full effect in the Mystery Dungeon series.

If you are not familiar with the type matchups be sure to give it a brief overview beforehand! 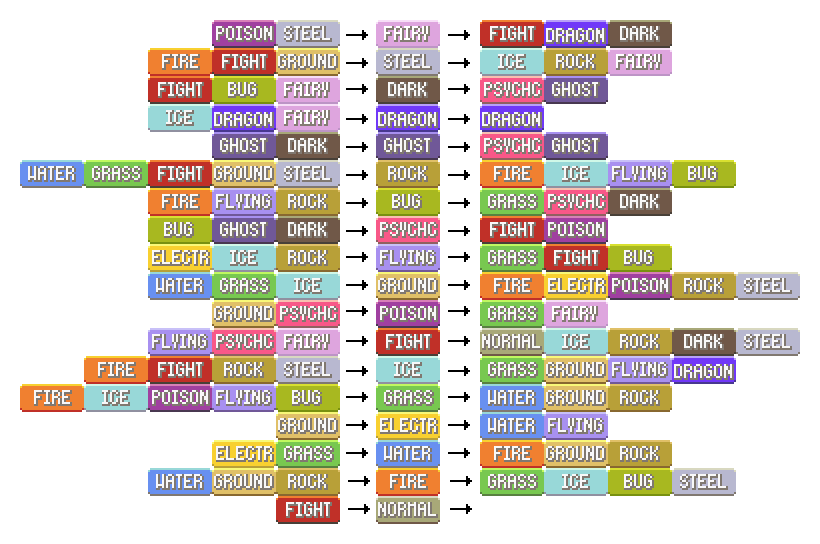 One aspect to note about the attack types is the super-effective and not very effective moves.

All Pokémon have a standard attack which deals typeless damage. This regular attack does not expend PP when used.

Pokémon may also have up to four special attacks in addition to their regular attack. The standard attack was much more powerful and dealt damage according to the usual rules using Attack and Defense stats.

Special attacks may be linked together, wherein the linked moves are done in succession (in which case one PP is taken from each move). Moves can be linked at the Gulpin Link Shop.

For the most part, abilities are similar to the core series. However, some abilities differ:

Pokémon Mystery Dungeon introduced its own series of status conditions, of which any number may occur at once.

Most statuses are temporary, but Burn and Poison remain permanent.

All status conditions are removed upon entering the next floor of a dungeon.

Pokémon may be affected with both Sleep and Paralysis, and (much like in the TCG) other status ailments may replace previous ones. For instance, a Poisoned Pokémon may become Paralysed instead.

Pokémon will never attack themselves while Confused. However, they may move or attack in a random direction (including hitting teammates).

Mystery Dungeon introduces a new, exclusive status called hunger. When a Pokemon's belly drops to zero, a Pokemon will lose 1HP for every step they take until they faint or have eaten.

Similar to other Pokemon games, you gain experience for every Pokemon you defeat while going through the dungeons.

As you progress your Pokemon in levels you will have the option to learn moves, so be sure to choose your moves wisely!

Much like in the Safari Zone of the core series games, where the player is able to toss Bait or throw a Rock (or Mud) at Pokémon, throwing items in Mystery Dungeon deals damage.

The player is able to stock up to 99 units of a throwing item in a single item space in contrast to other items, where multiple items take up multiple spaces in the item list.