Pokemon Sword and Shield: 35 New Pokemon Added For Pokemon Home Ahead Of Isle of Armor And The Crown Tundra DLC Expansion

Pokemon Home has launched, which means you can get more monsters in Pokemon Sword and Shield.

Pokemon Home is finally here, and that means you can finally import more of the franchise's legendary critters to your Pokemon Sword and Shield save.

The brand new DLC expansion pass is not far away and we already know that the expansion pass was intending to bring over 200 new Pokemon to Isle of Armor and The Crown Tundra.

What Is Pokemon Home?

Pokemon Home is an app that lets you transfer Pokemon from older games in the franchise to put them into Sword and Shield, making the Pokedex even bigger.

We've put the list below of all the fresh Pokemon you can transfer across, including the Gen 1 starters – our favourites.

New Pokemon That You Can Import Into Sword and Shield NOW

Read More: Pokemon Sword and Shield: Pokedex For The Isle Of Armor And The Crown Tundra And All Confirmed Pokemon

We already know that a lot of these Pokemon are expected to appear in the Isle of Armor and The Crown Tundra DLC.

Meaning plenty of past generation starter Pokemon and legendaries that were promised to arrive in the DLC have no arrived early.

It's evidently a good thing and a great way to promote Pokemon Home, but that theoretically means we're now getting less content for more money?

The community has expressed its displeasure at how the National Dex was added at the start of Sword and Shield - especially as Pokemon are now being added later into the game but will cost the consumer to have them. 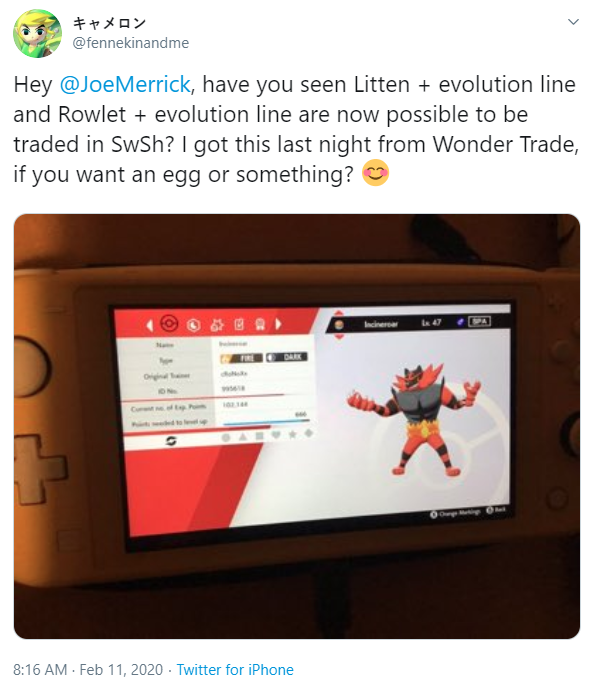 It's definitely a nice gesture, but whatever decision Nintendo makes it will seem like there is a negative attached.

This is probably the best-case scenario, releasing new Pokemon in bursts to not only keep players interested but feel like the consumer isn't having to pay for something they should have had all along.

This whole situation was originally reported as a hack, as it appears the new Pokedex went live before it should have.

That said, players can look forward to this surprise when logging in.

If you jump into a Surprise Trade, there's a chance you could end up with a Litten, Rowlet or similar.

The same can be said of evolutions, meaning you could, in theory, jump into a battle against another user and find an Incineroar.

How Game Freak will react to these hackers is anyone's guess, but users have been able to trade them with no repercussions so far.