Is Solo Mode Coming As Part Of Apex Legends Season 4?

Apex Legends stole plenty of hearts with its squad-based view of Battle Royale, but fans continue to request a solo mode. Could it be coming sooner than you think?

Apex Legends players have plenty to sink their teeth into, with tonight being the start of Season 4 - Assimilation.

The battle royale juggernaut from Respawn received changes to Ranked Mode, new weapons in the form of the Sentinel Rifle and Sidewinder rocket launcher and new playable character Revenant making his long-awaited debut - having already killed other fresh character Forge.

You may be wondering what more fans could be asking for, but one thing that’s been on the minds of many competitors in the Apex Games is the addition of a Solo Queue. Could it be arriving in a later installment of Season 4?

Respawn’s talented team had been tweeting in an effort to drum up hype for the next big moment for Apex Legends, with the new season coinciding with the game’s one-year anniversary. One of the game’s producers, Josh Medina, confirmed that the developer was about to “show only the beginning of the goods Season 4 will bring”.

So far, so vague, but in the replies to the tweet was Cloud9 player PVPX who asked what’s on the minds of many - will Season 4 “bless us with solos?”

“This my opinion: I think duos is a better experience than solos… playing alone against 55 Wraiths isn’t exciting to me… the duos and threes experience is where it’s at, for me,” Medina responded. 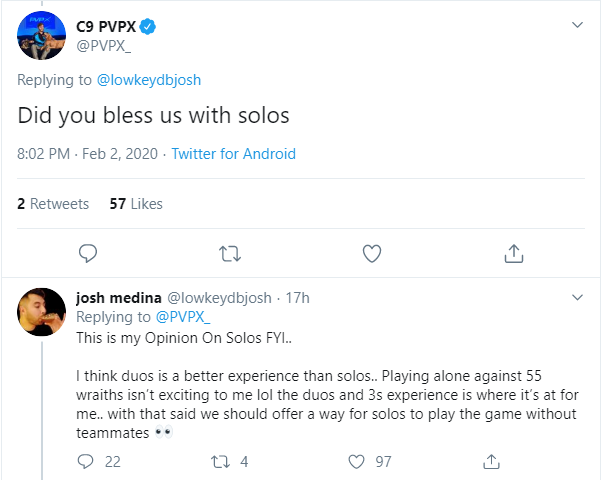 Ok, so no solo queue? It doesn’t sound like it’s quite out of the question yet, at least according to further tweets from Medina.

He mentioned that Respawn “should offer a way for solos to play the game without teammates”, while also making a point to confirm that he’s not promising anything – while also suggesting it’s “something to think about for the future of Apex” for Respawn.

Apex Legends may focus primarily on three-player squads, but it has dabbled in both solo and duo queues in the past.

As part of the Iron Crown Collection limited-time event, players were able to go it alone for a two-week period, or buddy up with one other player in duos.

It seems crazy to think that the game is a year old and that other than those two weeks there hasn’t been any way to play solo, but that’s down to Apex Legends’ unique character roster and the way they gel together.

Considering the new season kicked off tonight, we likely don’t have too long to wait to find out what’s in store for the next part of Season 4.