Server health and consistency has been the subject of much debate during FIFA 20, with countless players complaining and taking their frustration to Reddit. More and more professional football players are getting into playing FIFA and it appears that

Server health and consistency has been the subject of much debate during FIFA 20, with countless players complaining and taking their frustration to Reddit.

More and more professional football players are getting into playing FIFA and it appears that even the professionals can lose their cool after defeat in the Weekend League.

Luis Alberto Romero Has A Message For EA

Luis Alberto Romero, a professional Spanish football player for Lazio, has spoken up on the issues that plague FIFA 20's servers.

This kind of comment, made by such an influential person may be what Fifa fans have wanted for a while and could elicit a response from EA. Many users are calling him out as a “needed hero”. 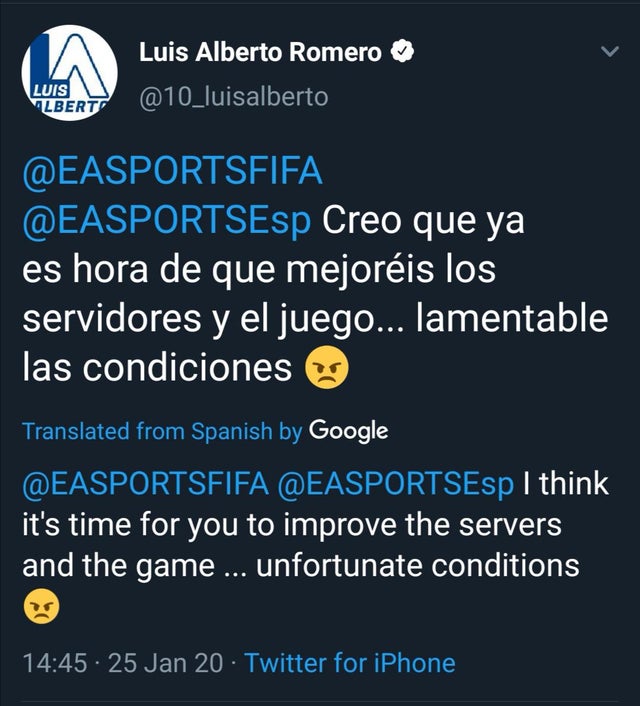 His comment clearly means a lot to fans of the franchise, let's hope EA acknowledge his comments, ignoring it could further damage to the integrity of this much loved title.

The Spanish player has found much support, with multiple FIFA players stating how they “will buy his Headliner out of respect”.

What Does This Mean For Competition?

The competitive esports side of the game, of course, needs to remain as fair as possible and without stable servers to host qualifiers, the games’ skill requirements are watered down to an extent.

It’s likely that we’ll see server performance improve going into the next months if additional influencers in the community speak up alongside Luis Alberto.

Due to qualifiers being held online and not LAN (local area network), it is essential that there is minimal latency, allowing for the fastest reactions from competitive players.

An upgrade in server performance will no doubt go a long way to getting the community onside with EA.