With Sett, the Boss, expected to slam into Summoner’s Rift for the first official patch of 2020, it’ll probably not do to just rush off to the shop, plonk down BE for him, and rush into solo queue without doing a little studying.

To squeeze out every ounce of strength from his impressive muscles, you’ll need to prepare or keep in mind three factors: the runes he’ll want to use, the order of abilities you’ll be leveling, and – of course – the items you want on him. 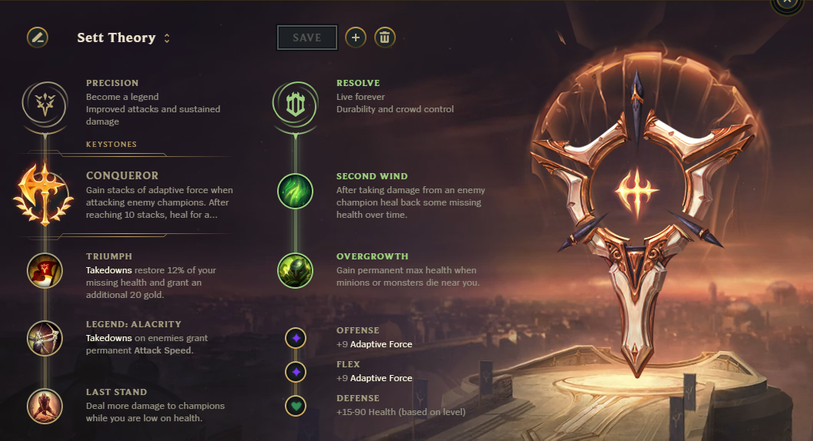 Barring any announcements of a total rune overhaul with or after Patch 10.1, your best bet is still to go for a Precision-based build, taking advantage of Conqueror’s burst healing at 10 hits to sustain yourself through fights.

Note that 10 hits for Sett is technically just five auto-attacks, along with whatever damaging abilities he used in the fight, thanks to the extra burst of attack speed on his alternating right-fist attack.

This is also the reason to grab Legend: Alacrity, as the attack speed bonus only makes it easier to trigger his keystone rune.

Last Stand is also a standard rune for this kind of build, but it is especially potent with Sett, thanks to his Grit reversals – after all, the shield doesn’t count as health.

The splash into Resolve is fairly standard for bruisers, of course – you need at least a bit of tankiness to make your way through a fight.

Second Wind is meant to complement Sett’s naturally high regeneration, allowing you to lane longer without needing as many health potions; Overgrowth, along with the Defense minor rune, allows you to store more Grit.

Read More: League Of Legends: Sett Release Date, Abilities, Skins And Everything You Need To Know

For your first three levels, you’ll want to level Haymaker (W), Facebreaker (E), then Knuckle Down (Q) – in that specific order.

Both Haymaker and Facebreakers are ranged spells, allowing you to trade safely right off the bat, with Facebreaker as an obvious secondary priority, since pulling the enemy player in closer might not be what you’re looking for right at the start.

Knuckle Down, on the other hand, is clearly meant as a followup to Facebreaker, rather than a wholly independent attack. As its range is limited to your own melee autoattacks, it needs a successful Facebreaker to be effective in fights, meaning you don’t actually want it until you have access to the other two spells.

Past level three, however, your priorities shift. Now, you actually want to level Knuckle Down first, as fast as possible (as well as The Show Stopper (R) whenever possible, naturally), then Haymaker, and saving Facebreaker for last.

This is largely because Facebreaker’s main value, as a way to start fights and slow down or stun enemies, is near its maximum effectiveness right at rank one. Knuckle Down, meanwhile, scales more and more with the enemy’s maximum health with every rank, making it the most dangerous source of damage on Sett’s kit.

Haymaker’s secondary priority is built on its decreasing cooldown, dropping over 50% from 16 seconds to 8 before factoring in cooldown reduction items, allowing you to deploy his shield more often in fights and stay alive for longer.

Area-of-effect waveclear, lifesteal, and extra health regeneration makes Sett a happy laner. He’ll appreciate the extra health from Giant’s Belt too, as it makes it less likely that a visit from the enemy jungler will wreck him before he can get his shield up and make it to the relative safety of a friendly tower. 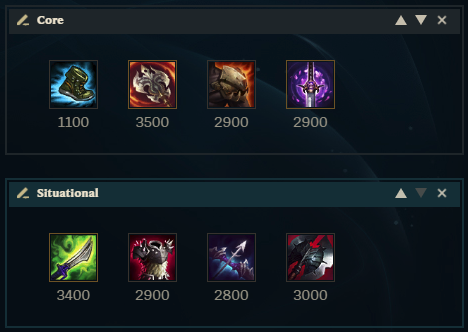 From the above starting point, you finish off into Ravenous Hydra and Dead Man’s Plate, making Sett that much more effective at getting into – and surviving – fights.

Youmuu’s Ghostblade is a must as well – the extra movement speed both in and out of fights lets him get into position for a Show Stopper and Facebreaker combo faster, then chase down victims even through minion lines.

From there, as with all champions, you adjust your items to match the situation at hand. A lot of mages and crowd control means a Quicksilver Sash, then later a Mercurial Scimitar, to break your way free.

Ranged attack damage got you down? Make them eat their own bullets with Thornmail. Healers or Mundo? Shut that down quick with Grievous Wounds applications. Armor getting in the way just means a Black Cleaver, of course, with the extra burst of movement speed on its Phage component especially appreciated.

Of course, if your team has more than enough damage, and what they really need out of you is a dependable front line, you can always eschew any of the above for Randuin’s Omen, crippling the entire enemy team’s movement while bolstering your own even after they’ve shaken off your Facebreaker.

While it might be tempting to double down on the mobility advantage with Righteous Glory, note that the mana is rather wasted.

You got all that? Good! Now go in there and bash some skulls together… once Sett is actually out, of course.

Looking forward to League of Legend’s newest champion? Let us know on Twitter!

PAGE 2: READ OUR TIPS AND TRICKS ON HOW TO BEAT APHELIOS