The latest game under the Gears of War banner, Gears Tactics, is set to release in the coming year.

Fans of the franchise have been anticipating its release since it was showcased at E3 2018.

The Halo franchise experimented with other genres in the form of Halo Wars, most recently Gears 5 was a success, how will their attempt at a tactical game fair?

Here's everything you need to know about Gears Tactics.

Be sure to bookmark this page and check back regularly.

Gears Tactics is set to release on April 28, 2020, and will be playable on PC and Xbox.

As it is a Microsoft title, this will be available on the Xbox Games Pass.

Gears Tactics is far from the usual Gears of War game, instead of being a third-person cover-based shooter.

Gears Tactics is a turn-based, tactical squad building game set years before the Gears of War saga. You will be tasked with manoeuvring your squad in position in order to defeat bosses on each level.

Check out the most recent Game Awards 2019 Footage:

The main premises of the story is centred around Gabe Diaz, who is the squad leader of the platoon you will be focused upon.

The whole plot of the story is leading this squad to take down the Locust monster Ukkon.

The story mode is also being advertised as being as long as 40 hours.

Unlike similar title Xcom, there's no base-building to be found. Instead, the campaign is focused on upgrading your squad.

So far, the following characters have been confirmed for the game:

There will be five classes in the game at launch – Support, Vanguard, Scout, Sniper and Heavy.

Each will have four different skill trees, which should help differentiate teams.

Each class has a defining weapon, and each weapon will offer its own execution animation.

As it stands, the following weapons have been confirmed for the game:

The game will revolve around the following events and locations:

Gears Tactics was primarily developed by Splash Damage, who is perhaps best known for working on the Gears of War 4 multiplayer.

As well there have been reports that The Coalition helped in some departments. 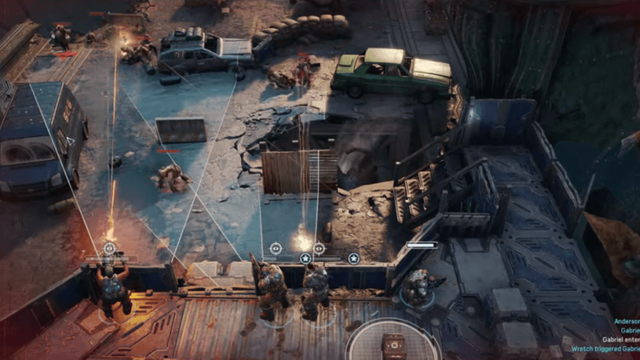