It appears that a leak has emerged detailing two new game modes that could make their way to Modern Warfare!

Here are the details about this latest development.

Activision sent out a marketing survey to members of the Call of Duty community late on Thursday night, in order to get their opinion about the game. 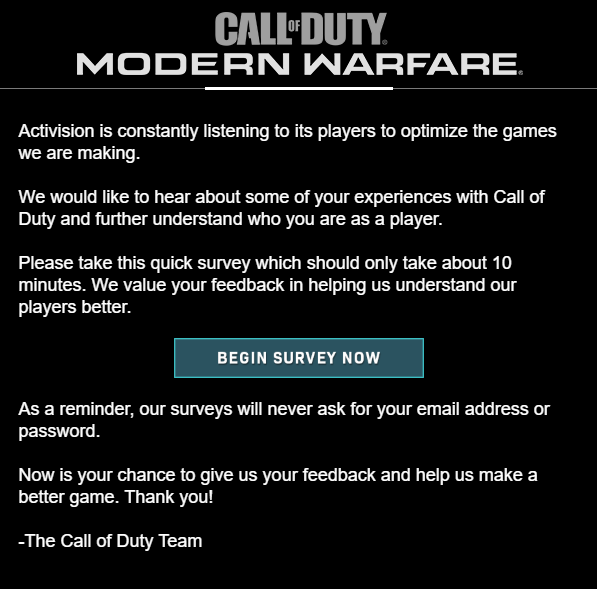 Twitter user @Brodizzleee recently brought to our attention that in one of the survey questions, the question is asked:

Two that stand out, which do not currently exist in Season 1, are Cranked and Grind. 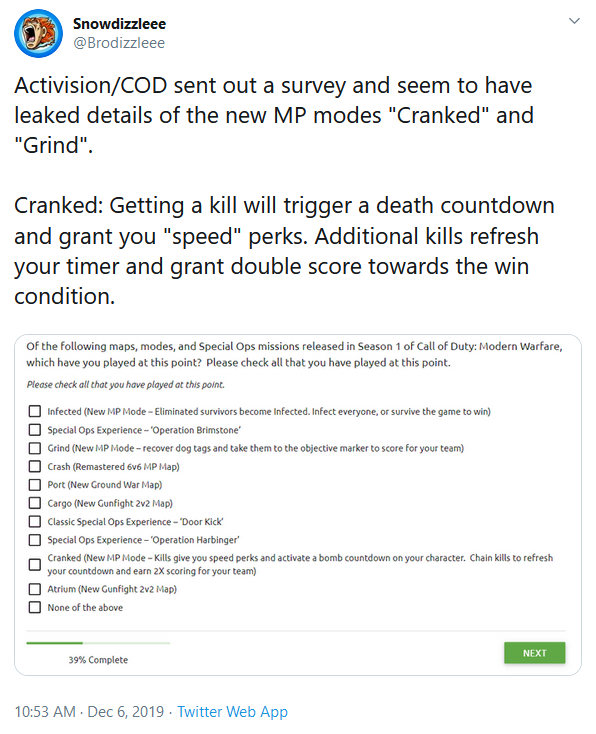 Evidently, this is a big mistake from the creator of this survey, but does that mean these game modes will be appearing in the future or were they scrapped after this survey was created?

It's not the first time information has unintentionally gone out - if you think back to Gun Game being leaked in the patch notes for a recent update.

What Is Cranked And Grind?

Cranked was a game mode first introduced in Call of Duty: Ghosts where players would receive a speed boost upon getting a kill, this would also start a bomb countdown timer.

Chain kills would refresh the countdown and earn 2X scoring for your team; if the countdown timer ran out, you would explode and die.

Grind was another game mode included in Call of Duty: Ghosts and Infinite Warfare and operates similar to Kill Confirmed. Upon killing an enemy, they will drop a dog tag that you must collect - however in this game mode you must drop them off at an objective point to score.

Are These Game Modes Meant To Be In Season 1?

In Season 1, we have only been informed about three game modes:

It could be that these game modes are coming at a later date, possibly as private match additions.

The community has expressed their concern in the past about the slow and the increase in passive playstyles and heavy "camping". Could this be Infinity Ward's answer?

It's no secret that many fans have urged IW to bring back the mini-map, which is a core element to Call of Duty games.

Gunfight has no doubt risen in popularity due to the way the maps are built, needing little risen for a fully functioning mini-map and thus promoting more aggressive gameplay from users. It could be argued that these game modes will promote players to play a more active role during matches.

What Does This Mean For The Player?

I think realistically it shows how hard Infinity Ward is working to try and provide us with as much content as possible.

Although there is a chance we may not see these two game modes, at least they are providing us with new and exciting features on a regular basis - or at least conceptualising them.