Modern Warfare Season One has been announced and it comes with a new set of maps, weapons, game modes, Operators, Spec Ops missions and much more. Here are all of the details

Modern Warfare Season One arrives on the 3rd December and it comes with a new set of maps, weapons, game modes, Operators, Spec Ops missions and much more. Season One will release just over a month since it's launch and just in time for Christmas!

Many players have been waiting for new Call of Duty: Modern Warfare maps to shoot it out and weapons to mix up the meta, for regular multiplayer, Ground War and Gunfight.

For this year's game, they have scrapped the season pass with all DLC now being made free - it's a very exciting time to be a Call of Duty player. 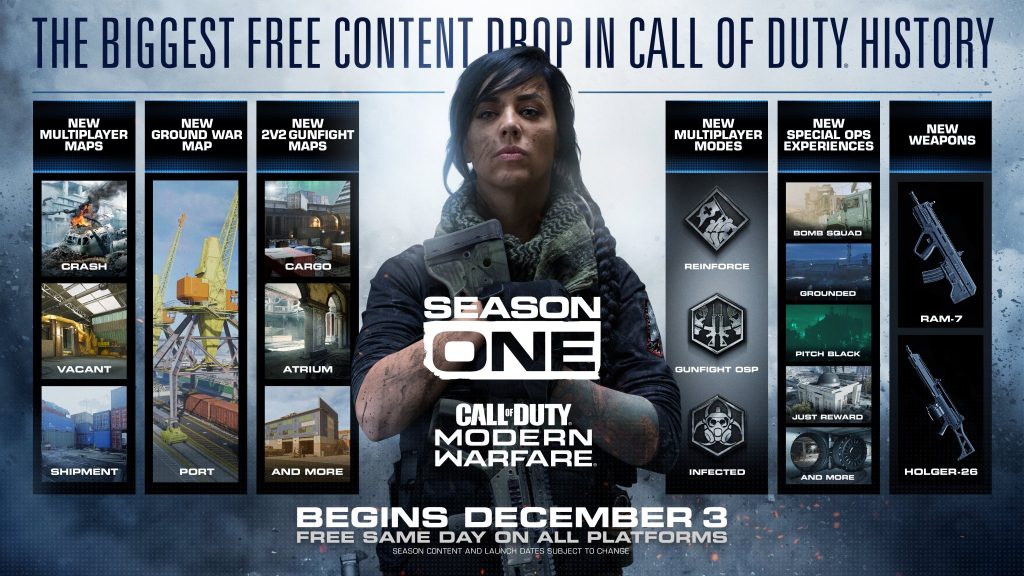 With so much content to come, we'll be sure to provide you with the best tips and tricks on our website.

Be sure to bookmark this page and check back regularly to get the latest info on Modern Warfare's Season 1.

Here are all of the details on Modern Warfare's Season 1.

The new season of Modern Warfare releases on the 3rd December 2019, releasing on PS4, Xbox One and PC.

The new season will likely go live at 6pm GMT (1pm ET, 12pm CT, 10am PST) based on past content updates (this is not confirmed and purely speculation).

With the release of Season 1, you can find the patch notes for this here.

Twitch drops have been enabled for the start of Season 1, the rewards are:

The item store and the ability to buy COD points have no been enabled.

Back in October, it was rumoured that Modern Warfare was getting a big overhaul; the big change being that the mini map would make a full return.

However, it was addressed by Joe Cecot, the lead Co-Design Director of Multiplayer at Infinity Ward, on Twitter. 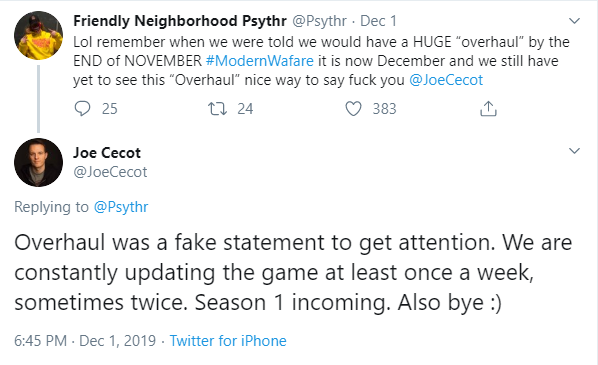 The rumour was first announced by TheGamingRevolution, who is a well known leaker of Call of Duty information, it appears this time his information is wrong; despite coming up with the goods on many occassions.

Despite pleas from fans and heavy criticism from players, Infinity Ward have stuck to their guns in regards to the mini map. It's interesting how they've decided to take an almost stubborn stance on a core aspect of Call of Duty, something many fans miss and have expressed their concern about.

When you think back to how quick the developers were to react to feedback during the beta, it's a surprise to see them so reluctant to do so again.

New maps will be arriving in Season 1 for regular multiplayer, Ground War and Gunight. Overall there are 7 maps on offer across all 3 modes.

You can watch early gameplay of Crash here:

You can watch early gameplay from Port here:

You can see that Vacant actually appears in the new Ground War map Port.

You can watch early gameplay of the new Gunfight maps here:

It's been confirmed that Gunfight will be getting a 1v1 and 3v3 mode, much to the request of players.

It was confirmed on Twitter via Joe Cecot, who is the Co-Design Director of Multiplayer at Infinity Ward, after replying to a fan's question about 3v3.

He confirmed that it is in the pipeline, along with a 1v1 mode.

The game mode has grown in popularity recently, as many players explore other aspects of the game beside the core multiplayer. Despite the criticisms that the multiplayer receives, Gunfight is simple and easy to pick up; with the rotating classes it keeps things fresh and challenging.

Multiplayer Missions have also been confirmed to be staying.

Two new guns will be arriving with Season 1, will they shake up the meta? Here are the weapons you can expect to see:

The RAM-7 appears to be an assault rifle, resembling something close to the Tar-21 in Modern Warfare 2.

The Holger-26 appears to be an LMG, resembling something close to the HAMR LMG from Black Ops 2.

Operators are the characters that you play during Modern Warfare's multiplayer, each with their own background.

New multiplayer modes will be launching with Season 1 including:

New game modes called Cranked and Grind may have been leaked - check out the information here.

New Spec Ops missions will be arriving to Modern Warfare's Spec Ops mode, here are the new missions to come:

Read More: Call of Duty Modern Warfare 2019 Spec Ops: Everything We Know About This Co-Op Mode In The New Call Of Duty on PS4, PC and Xbox One

Season 1 will introduce the brand new Battle Pass system, with a free and premium track, for players to earn cosmetic content. This system will replace loot boxes that previously featured in Call of Duty.

The Premium Battle Pass will be purchasable in-game via Call of Duty Points (this will cost 1,000 COD Points). The free Pass is available for everyone to earn new content.

It has been pointed out by Charlie Intel that the Battle Pass will offer COD Points as rewards and that you can earn enough to buy the next season pass.

The Season 1 Battle Pass will offer 1,300 COD Points in rewards, if the the next Battle Pass stays at 1,000, it means players can recycle their COD points into the next one; theoretically only ever having to pay for it once.

Within each season will be season ranks. Once you reach level 55, you will begin the seasonal rank (for that season) going past level 55; this rank is reset once the season is complete, to your original rank and you will return to level 55.

There will also be challenges to complete (rumoured to be around 100), which will give you a ribbon and an XP modifier.