Luigi's Mansion 3 Review: Why This Game Needs To Be On Your Christmas List

Luigi's Mansion 3 came released at the end of a chaotic October 2019 and despite being a game many may have overlooked, it could be one that tops most Christmas lists.

Everyone’s favourite sidekick returns for another ghostbusting thriller in Luigi’s Mansion 3. The moustached hero once again finds himself thrown into the thick of it, as his friends have also once again been kidnapped by ghosts.

In a day and age where realistic graphics, online multiplayer and fancy hardware seem to dominate the discussion within the video game industry, you can always rely on Nintendo to give you exactly what you want, even when you haven’t asked for it.

That’s how I feel about Luigi’s Mansion 3, I knew what I was going to get, and it delivered. Overall, 2019 has been a poor year for game releases, there have been too many titles littered with bugs and often launched in an unfit state. That’s where Luigi’s Mansion really shines for me, it wasn’t the game I expected to steal spotlight amongst the October releases, but it may have done just that with a very solid account.

What is Luigi’s Mansion 3? 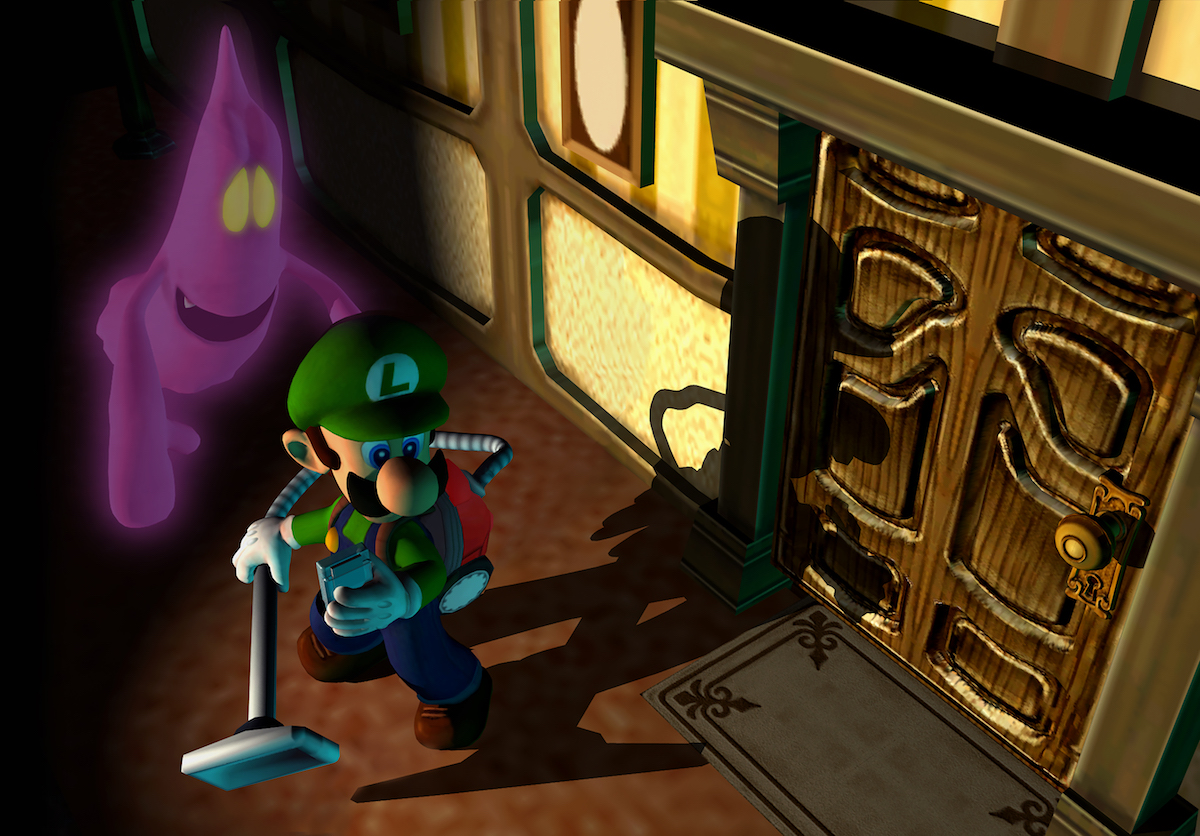 Luigi's Mansion released on the Nintendo Gamecube in 2001

Luigi’s Mansion started as the first standalone game for Mario’s brother and trusted sidekick, it was also one of the launch titles for the Nintendo Gamecube back in 2001. It features Luigi attempting to save his brother from being imprisoned, in a painting, by King Boo. Initially, Luigi wins a mansion from a competition that he did not enter; both Mario and Luigi agree to meet each other there and check it out. Upon entering the mansion, he discovers that the mansion is haunted by ghosts and Mario has been kidnapped. In order to combat the ghosts, he sucks them into a modified vacuum cleaner (the Poltergust 3000). Luigi must fight his way through a series of puzzles to rescue his sibling.

Luigi’s Mansion 2 followed a similar style, but the story revolved around retrieving shards of the shattered Dark Moon; which is a magical object that has a pacifying effect on the ghosts within the game.

Luigi’s Mansion 3 again features the same gameplay mechanics and plenty of ghosts. However, the setting is based in a haunted hotel along with an array of new mechanics, to help you solve various puzzles. 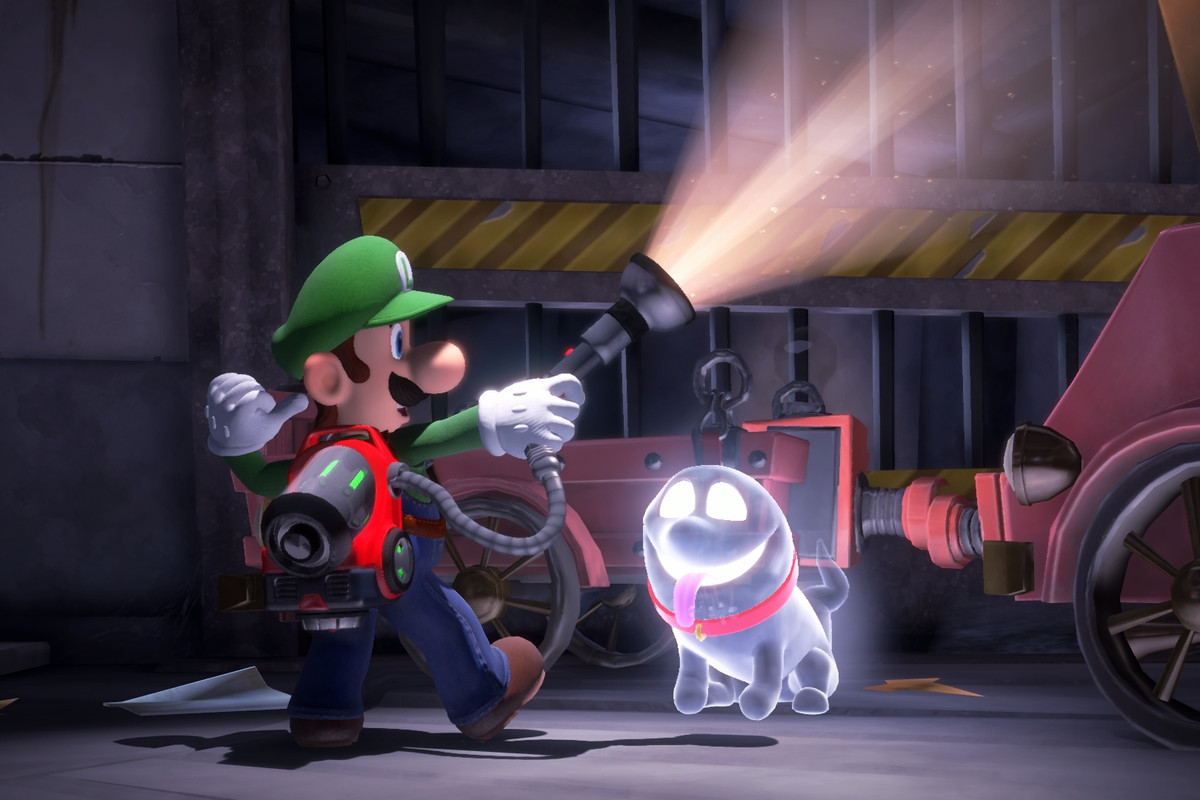 Mario, Princess Peach and Luigi (along with their entourage of Toadstool servants) are invited to stay at a fancy hotel. Upon arrival, they’re greeted by the owner of the hotel and everyone retires to their rooms; everything seems normal, until night-time rolls around.

Luigi is awoken by Princess Peach screaming and, against better judgement, goes to investigate. Upon leaving his room, he discovers that everyone is missing and it’s not long before we bump into the main villain – the hotel owner Hellen Gravely. The owner, who is also a ghost, invited Luigi and their friends to the hotel to enact revenge. She describes how she admired the work of someone previously and released them from captivity, only to reveal King Boo (the main antagonist of the first game). He reveals that he has trapped all of Luigi’s friends in paintings and plans to do the same to him too. However, before he can do so, Luigi escapes.

Luigi lands in the laundry room, after escaping through the laundry shoot. He eventually finds his trusted weapon, the Poltergust G-00 and ventures into the hotel in search of his comrades. After fighting a few ghosts, he finds Professor E. Gadd imprisoned in a painting. The professor and Luigi team up together save their friends and catch some ghosts! 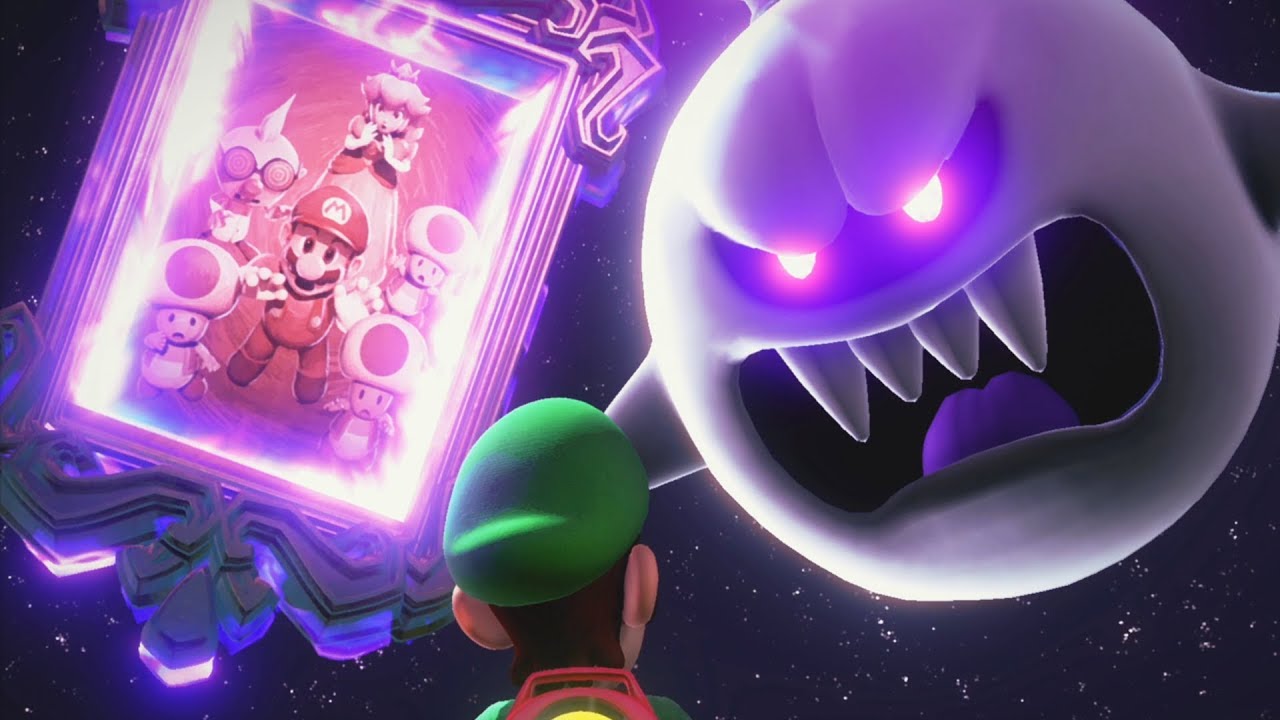 King Boo is BACK

Once again Luigi’s Mansion follows a similar narrative that started off the franchise. Since we’ve only had 3 games in the series to date, it gets away with revisiting an already used story; especially as the game’s structure works very differently. If this was a franchise pumping out game after game, I would have probably condemned it for being stale. This trip down memory lane has an appealing nostalgic feel to it.

It’s easy to connect with the protagonist, Luigi, as we all love Mario and his companions, so I’m already sold on my objective and what’s to come throughout the game. It continues to do what Luigi games do best: provide an entertaining experience through comedic story telling.

When I sit back and reminisce about my experience with the game, I do start to realise that there isn’t a huge amount of detail to the story. It is essentially a carbon copy of the first game and doesn’t waste your time telling you that – it sticks you right into the thick of the gameplay.

I really enjoyed the idea of going with a hotel for the setting rather than a mansion, it allowed them to play around with different themes and concepts making each floor a unique experience and creating interesting puzzles tailored to the environment. However, I will say that it made things feel a bit confined in the grand scheme of things.

The gameplay is just as you remember it back on the Nintendo Gamecube, however Luigi comes equipped with new toys and mechanics to help you solve more puzzles.

The game revolves around you making your way through the hotel, which is comprised of floors accessed via an elevator, that you need to make your way through. As you would expect, it’s not that simple – to be able to use the lift you need the buttons for each floor, but they have been stolen by the ghosts inhabiting the hotel. Upon defeating the “boss” ghost for each floor, you will win back a button to put in the lift; thus, allowing you to progress through the hotel. As I said before, I don’t mind this; it made for a unique experience.

Where I will say I felt a little bit disappointed is that once I finished on one floor, there was no need to revisit it; something I felt the original Luigi’s Mansion did well. Often, I would make my way to one floor, complete it and never come back – the game really does filter you through a certain pathway to avoid you lingering around. I think it’s a shame because if you take the time to look around, there are some great interactive pieces within the environment, including a few Easter eggs. It’s also a shame that some levels are underwhelming and only feature a boss fight. 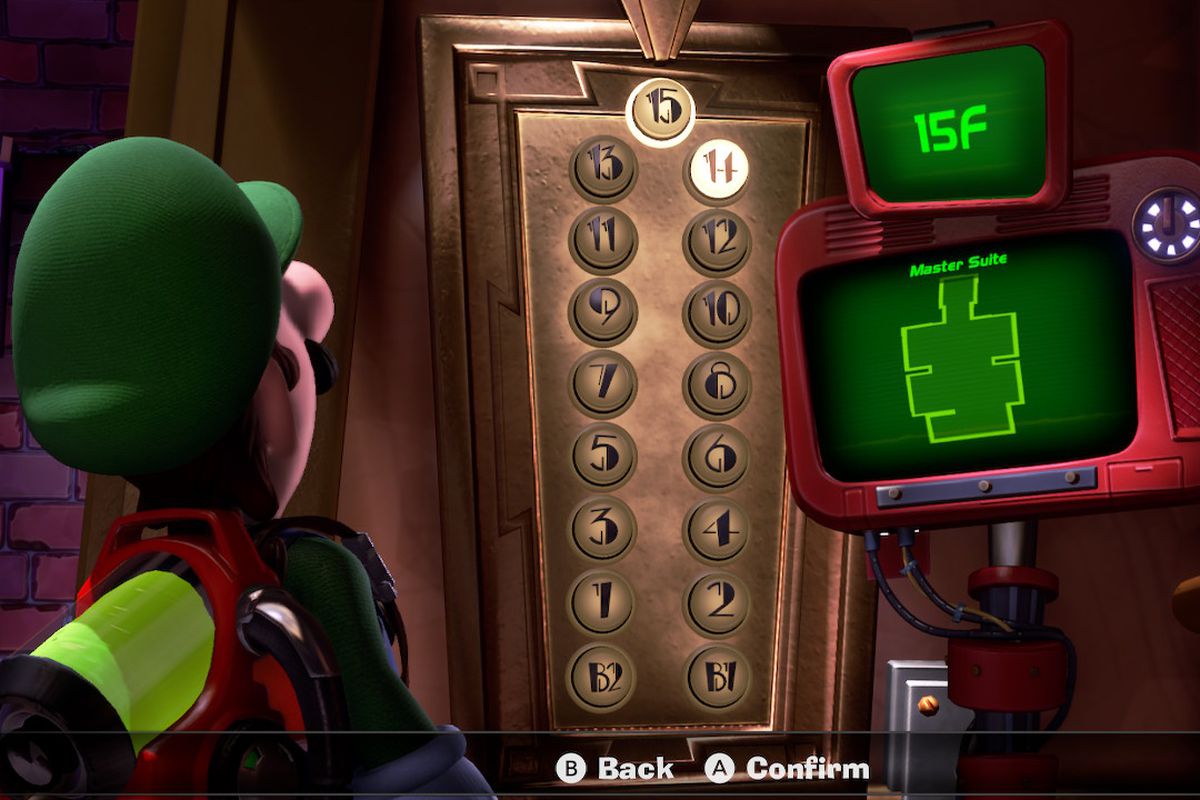 The controls work as you remember them, I did find that aiming with the right stick to be slightly challenging when play with a handheld setup (Joycons connected to the Switch screen). It’s not a huge issue, as the game is not setup to rely on massive amounts of accuracy. With the Switch having many more buttons, you can see why Luigi has so many new tools at his disposal.

Speaking of which, Luigi now has an array of new moves - including the ability to slam enemies into one another, allowing you to deal damage to those you’re not necessarily engaging with. Alongside this, Luigi can use his vacuum to burst the area around him and push opponents away while leaping into the air. There’s also the Suction shot, where Luigi will fire a plunger attached to some rope, in order to pull obstacles out of the way. These certainly allow puzzles to take on a new dimension as the game unfolds.

One of the most interesting new additions, is the introduction of ‘Gooigi’, your slimy doppelganger. Gooigi allows you to enter areas that are inaccessible to Luigi, such as passing through grates, bars, spikes and pipes. Gooigi is necessary to progress through the game and not merely just to help you get extra collectibles. At first, I cannot say I was overly thrilled by how this seemed to slow down the gameplay and puzzle solving, but once you understand how it contributes to the puzzle it is a nice addition.

Where these new mechanics really start to shine is on the 7th floor. On this floor, the place is covered in plantation; almost like an indoor greenhouse. The boss ghost is a gardener and has grown a carnivorous plant, to keep the button away from you, that scales up a flight of stairs. On your way up, there are various puzzles and obstacles you need to overcome to proceed – one that stands out in particular is using your vacuum to grab onto hanging vines and swing across to the adjacent platform.

Another great idea introduced, is how you can use electronics within the hotel such as radios, TVs and even a Buzzsaw; this is activated by flashing your torch at the device. In one of the rooms, Luigi is attacked by a plant. Unable to move, you begin to panic as you slowly watch your life drain away. Who will rescue Luigi? Up steps Gooigi, unbound by the plants grasp. He sucks up the activated buzz saw and cuts the plant in half to save his physical counterpart. You then need to co-ordinate with each other to remove a giant watermelon by using your plunger dart to lift it out of the way. It’s little things like this that took a potentially trivial idea and turned it into a crucial part of the game; it's what makes this game great and after a few hours of playing, I owed the game an apology for dismissing this as a limited gimmick.

The game is beautiful, it’s by far the best a Mario game has looked to date in my opinion. The graphics are really highlighted within the opening sequence where minimal gameplay is present. I did spend a fair chunk of my time exploring the hotel and Luigi’s bedroom at the start because I was genuinely that impressed.

Something that I do have to call out, as good as the graphics are, is that the art style doesn’t seem to fit the mood I was expecting – it needed to be darker and gloomier, like the original was. I think that’s what made Luigi’s Mansion so charming, it was a very different approach to a game like this. I can imagine that the art style in the third game fits more inline with Nintendo’s ideals and will probably be more engaging for the younger audience; if it’s too gloomy it could be off putting (I do remember being petrified about playing the original by myself). 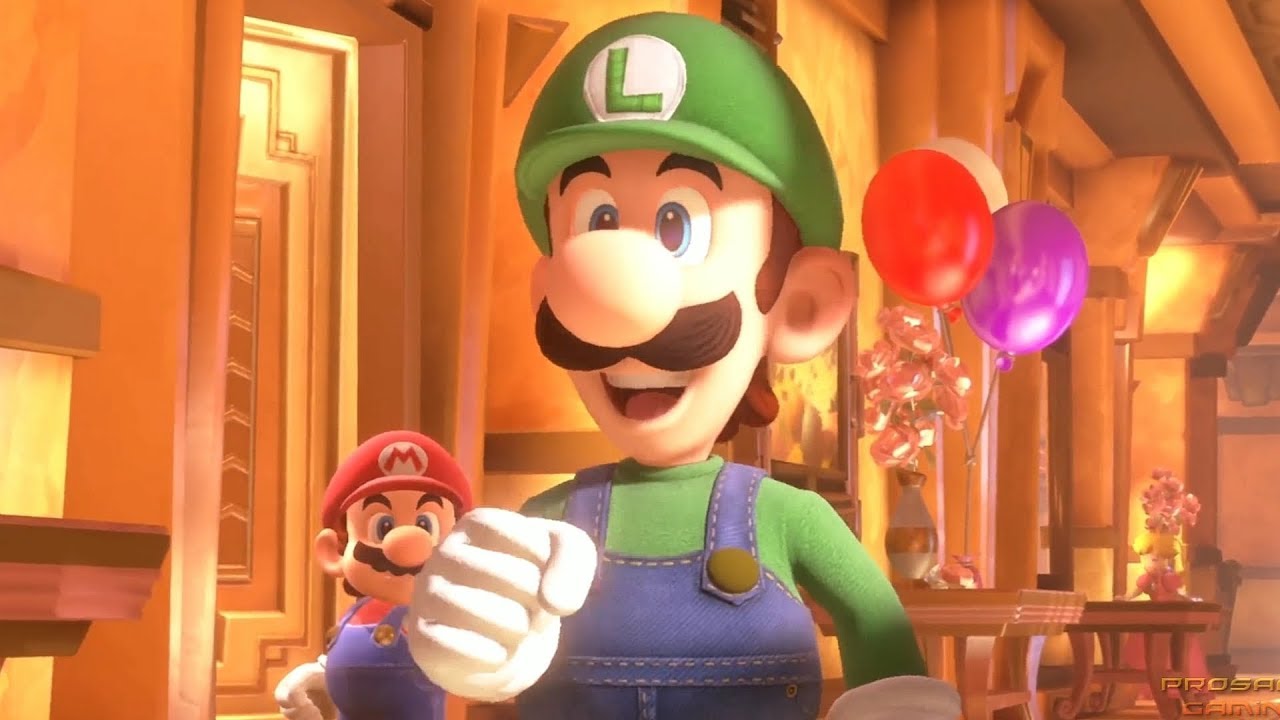 The game is beautiful

Overall, Luigi’s Mansion 3 is another charming chapter in a great franchise and one that anyone will enjoy. Considering the game doesn’t have a huge amount of life in the main story, I completed it in under 12 hours, as well as a multiplayer experience that won’t keep you coming back long term, it’s not a game that needs to be picked up right away. However, it’s an enjoyable adventure for anyone looking to kill some time while travelling as I have recently done and one I think many will want to pick up this Christmas.