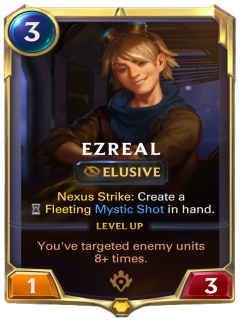 If you like, in Hearthstone parlance, to go face as often as possible, Ezreal’s your man for the job. With Elusive and a free Mystic Shot every turn, even a basic Ezreal is a guaranteed three damage to the enemy nexus – a heavy tempo play, and one that only gets better when you reach his leveled up state to turn his shots into free spells, and all spells into free Nexus damage. Naturally, if it’s reckless aggression you want to play, Noxus has cards that can further complement that strategy: spells like Decisive Maneuver and Shunpo not only help Ezreal flip faster, but they do a lot to accelerate him across the finish line too. 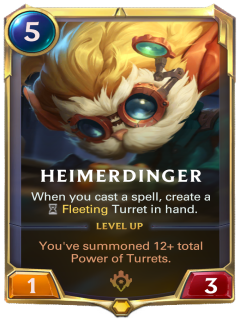 Finding the right ratio of Followers to Spells in Runeterra can pose a daunting challenge – unless you’re a genius like Heimerdinger, of course. Since all of the spells he casts turns into Followers, he’ll never be short of board presence to back him up – so long as Heimerdinger himself is successfully put into service, of course.

To that end, he might actually want to visit the barbaric north of Freljord for some backup. Not only does this grant access to Entreat, making it much easier to draw into Heimerdinger, but Freljordian spells are well suited to making up for the paltry defenses of Heimerdinger’s inventions. Just leave Avalanche at home, since its indiscriminate damage doesn’t play well with your toys. 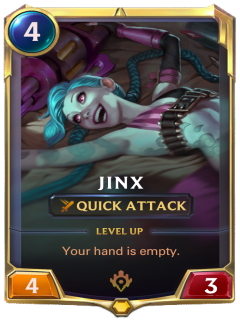 If Jinx can get a steady chain of Super Mega Death Rockets to go off every turn, there’s very little the opponent can do but hope to top deck a kill spell to knock her offline for a bit. But that’s a big “if,” since getting there requires putting Jinx in a precarious position. Not only is it hard to empty your hand in Legends of Runeterra in the first place, since both players draw every turn, but an empty hand means lacking options against a player that might have the exact cards they need to turn the game around.

There are a few options to play around this inherent disadvantage, of course. Having both Zaunite Urchin and Avarosan Sentry means you can save card draws for later (and have access to Entreat as well, to ensure a Jinx-centric strategy is more consistent). Or you can turn up the gas and just plan to have them in kill range by the time you’re out of cards. Whether this is an Ezreal-backed Allegiance strategy, giving Jinx Elusive via Supsnipe Scavenger and a constant rain of damage spells to soften her targets, or a Noxus-centric approach, you’ll at least not be short of action-packed plays. 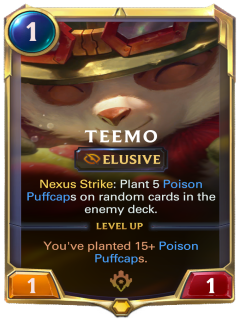 Teemo-centric strategies are sort of an alternative win condition, in that much of your damage is not through controlling the battlefield or going for the enemy Nexus, but punishing them through alternative means. In this case: mushrooms. Glorious, endless, tons of mushrooms. Every time Teemo or affiliated cards adds mushrooms to the enemy’s deck, they have a random chance of drawing a fungus-infected card that deals damage to them for that act of drawing. There might even randomly be two or more mushrooms on it – and each will also deal a point of damage.

If Teemo flips, and lands a point of damage on the enemy Nexus? Those mushrooms double in population. And again. And again.

Suffice to say, Teemo’s an irritating little unmentionable. But you know what’s even worse than a vanilla Teemo? A Teemo backed up by Crownguard might. With Demacia access, he can re-ready his attack with Relentless Pursuit or Tianna Crownguard, as well as present a toughened frontline to mitigate retaliation – they don’t actually need to defeat the enemy player, mind you. Just force them to draw more mushrooms...

Thresh is the opposite number of not one but two champions – unlike Kalista, he’d rather see enemies die than avenge fallen allies, and unlike Braum, he’d much rather spill blood himself than keep others from getting hurt. Toward that end, he’ll find plenty of employment up north. Stalking Wolf is uniquely well-suited to flip Thresh over fast, where he can then leverage his Follower-summoning abilities toward summoning Kindly Tavernkeepers to keep himself healthy, Avarosan Marksman and Icevale Archer to control the field… or take up animal husbandry to unleash whole Troops of Elnuks at once. 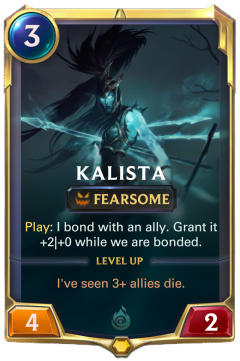 Despite nominally working as an avenging spirit, Kalista’s really only great a one thing: painting a target on her allies' back with a stiff +2 to their attack power. And to be fair? They kind of need to die. Cards like The Undying, or Lucian and Senna, actually benefit from a visit to the grave. They either come back stronger for it, or morbidly benefit from others expiring.

Oh, sure, it’s not… great… that Senna and Lucian keep gasping and raging in distraught bereavement every time Kalista revives one of them in front of the other, then throwing them into harm's way. But it’s also the most reliable way to evolve both of the Demacian gunners! It’s also the most reliable way to turn a piddly 2/2 The Undying into a truly dangerous monster, and they don’t even complain when you do so! 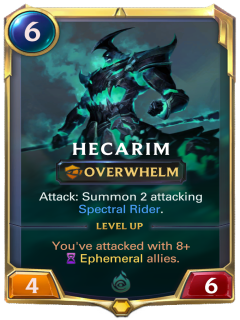 Playing Hecarim decks means playing with total abandon – you’re kind of forced to, since it’s not as if anything you summon’s going to stick around for very long. That’s the nature of all Ephemeral cards, of course: all the power they offer comes at the price of your defensive posture, so any mitigations to your strategy or a faster clock than yours spells trouble.

That said, there’s a reason why the top North American deck at the end of the first Preview Patch was a Hecarim-specific deck. As risky as a bad position can be for Ephemeral strategies, a good one is both extremely consistent and extremely hard to deal with. Just as you think they’re running low on gas, they’ll hit you with The Harrowing with an extra powerful surge, taking the deck over the top and toward the win. 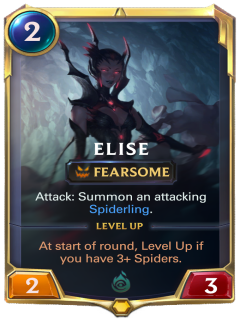 If you suffer from arachnophobia, stay away from this deck. Elise’s whole deal is to summon as many spiders as she can, then empower them as much as you’d dare. But while fearsome – literally, since Elise grants the keyword and Arachnoid Horror has it natively, preventing her attacks from getting mitigated by weak blockers – her deck is otherwise extremely linear. In order for it to perform at its theoretical best, it must call upon Noxian reinforcement in order to have access to key cards like Arachnoid Host and Arachnoid Sentry.

On the other hand, this does mean you’ll find it easy to establish a full board of Followers, which is something that cards like Crowd Favorite and Kato the Arm can appreciate.

Will Legends of Runeterra Release On MAC?