Apex Legends Mobile: Release Date, Gameplay, Beta and Everything We Know So Far

Apex Legends is coming to mobile, but it might not be for some time - here's what we know.

Apex Legends is coming to Android and iOS mobile platforms - with Season 4 arriving soon, can we expect it to release before it ends?

Mobile games have become a huge focus for AAA publishers so it comes as no surprise to see EA wanting to push Apex Legends into the mobile space.

It will join a heated contest with PUBG Mobile and Fortnite, who are already established on the platform.

Though EA's battle royale has only given us a window of when it will be released, and there is limited information otherwise, there's still a lot to speculate and plenty to be excited about.

According to @Apex_murdablast on Twitter Apex Legends Mobile is shifting it's release into Fiscal Year 2022, so April 2022 and onwards for EA, with a Beta planned for 2021!

This is still some time away at this point, and some fans are asking if it's even worth releasing at that point. The project isn't cancelled yet, let's hope it stays that way.

Job Posts Indicate That Mobile Version Is Under Development - 14th May

Job listings have been spotted, which were posted in April, recruiting a Build Technical Ops and Techincal Director. 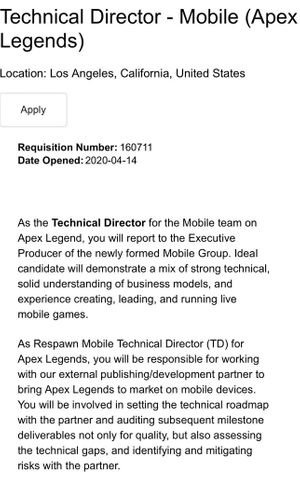 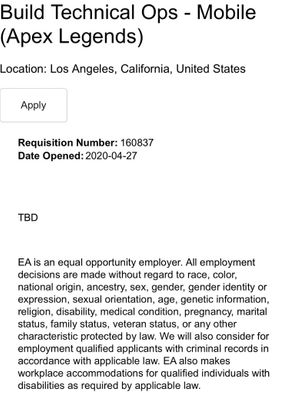 It was announced by Andrew Wilson, EA's CEO, at the financial results briefing that the battle royale shooter will be arriving on mobile devices.

EA will be working with a Chinese partner to “create a mobile Apex Legends that will be released globally,” as first reported by industry insider and analyst Daniel Ahmad.

“Rolling mobile out in China, you need to have a partner, and we’re, as we’ve said in the prepared remarks today, working with a partner there. We’re very excited about the opportunity,” EA chief financial officer Blake Jorgensen confirmed.

No official release date has been confirmed, but it was suggested at the publisher's earnings call that it is expected in EA's fiscal years 2022, which starts in April 2021.

We'll likely hear more information in the coming months, but the best place to expect information is at E3 2020.

With the first anniversary of Apex Legends scheduled for the 4th February, it wouldn't be a surprise to see it arrive just in time.

It would be unlikely that they will announce something so huge without having a working version of the game - the time frame will depend on EA's ambition to create a unique mobile game.

It's also worth considering that planned seasons and promotional events can affect when the game will launch for mobile, in order to avoid interference and make sure the mobile version isn't behind the original.

Who Is Developing The Game?

The game is confirmed to be in development as reported by industry insider and analyst Daniel Ahmad.

The title’s publishers have confirmed in a Q3 report that they are working with a Chinese partner to create and release the game globally.

It's unknown who will be developing the game at this time, but the company has turned to Tencent in the past to develop FIFA Online 4 and Need for Speed Online.