We’re halfway through the Ultimate Scream Promotion in FIFA 20 Ultimate Team, and I have to say, what a promotion it’s been so far! From 2 very good Scream Team releases, to cheap SBCs with great rewards, and cool objectives, Ultimate Scream this year...

We’re halfway through the Ultimate Scream Promotion in FIFA 20 Ultimate Team, and I have to say, what a promotion it’s been so far! From 2 very good Scream Team releases, to cheap SBCs with great rewards, and cool objectives, Ultimate Scream this year has already delivered enough to make it one of the promotions of the year.

In this article I’ll review: 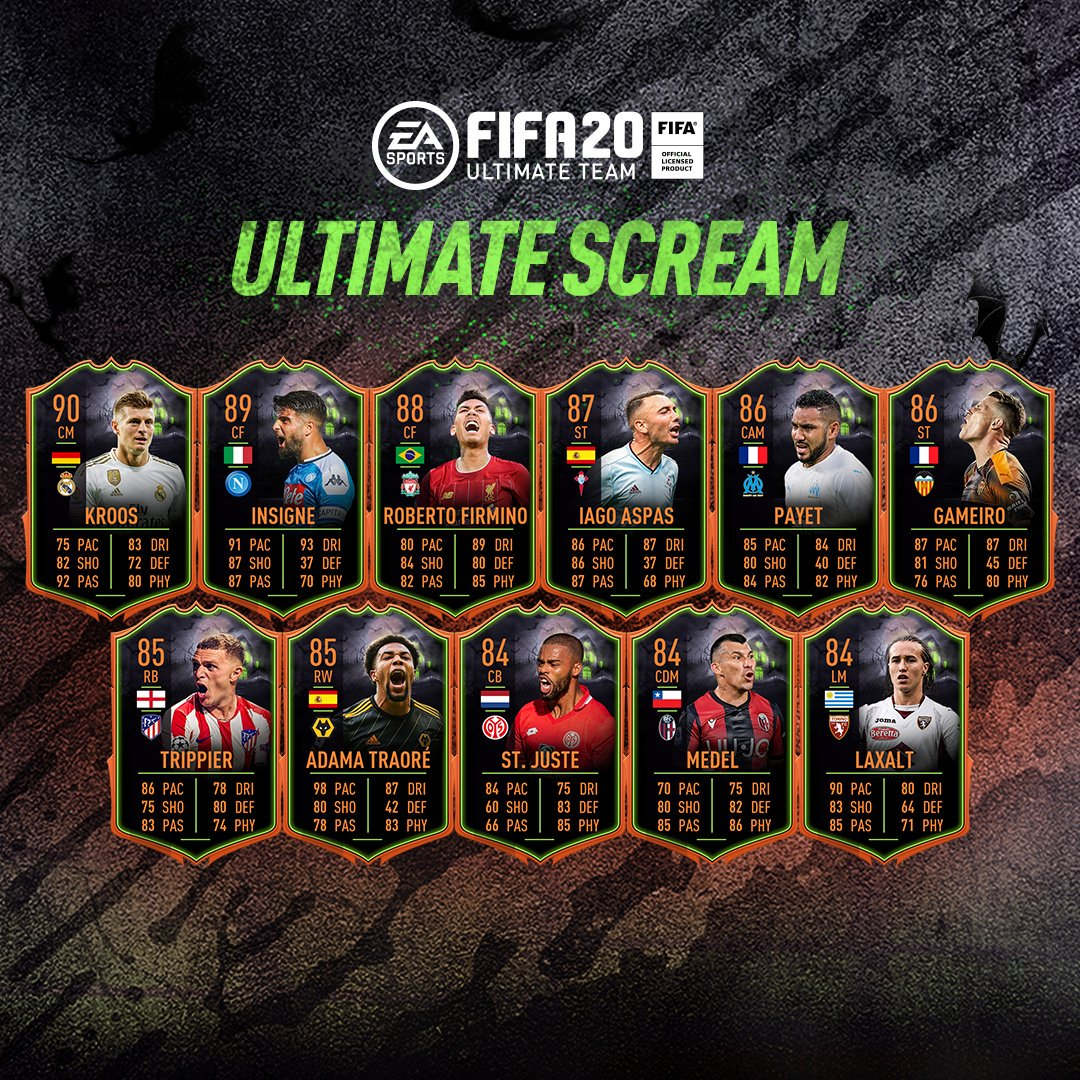 This year has seen a big change in the rating and upgrade systems we were used to previously in Ultimate Scream! The gimmicky system where overall ratings or certain stats would get upgraded or changed at ‘spooky’ times of the year has been completely removed in favour of major, permanent upgrades. Personally, I think this is the best change that has come from this promotion in years. The now 22 man roster of Ultimate Scream players has been nothing short of phenomenal, with Scream Team 1 featuring top tier cards like:

While Scream Team 2 delivered and gave us some top tier options:

Firstly, let’s talk about the Ultimate Scream Player SBCs, which in my opinion have been rather overpriced on the whole considering the cards on offer at this stage of FIFA 20 Ultimate Team. At the time of writing, we’ve had 4 Ultimate Scream SBCs released during the promotion, these being:

For me, in order to evaluate whether these SBCs are overpriced, you have to just take a quick look at alternative, tradable players you could get for the same or a reduced price. For example, for 100k less than James Milner’s SBC, you could’ve bought an 86 IF Gini Wijnaldum, who’s as good as, or arguably even better than Milner, and tradeable, meaning you can sell him and get the coins back whenever you like. Jesus Navas was relatively cheap, but even then, a top tier meta option like Ousmane Dembele for that La Liga RW is easily obtainable for the same price. Hulk, while being a very good card, plays in the Chinese League, making him very difficult to link to top tier meta cards like Mbappe for example, and Draxler, while being a good card, doesn’t offer crazy stats for a 210,000 coin SBC.

Despite the Ultimate Scream Player SBCs being somewhat overpriced and underwhelming this year, one area that has definitely delivered has been the Halloween themed SBCs released at minimum every 2 days during the promotion. These SBCs have offered users multiple opportunities to obtain very good pack rewards for very cheap, I packed my first Icon of the year out of a 25,000 coin Premium Gold Players Pack from the ‘Dracula’s Army’ SBC!

Ultimate Scream Weekly Objectives returned into FIFA 20 with a more flushed out objectives system, requiring users to complete multiple tasks this year, compared to just one task per player like previous years.

Edin Džeko was released into Season Objectives for the first week of the scream promotion, however I feel that objectives being heavily reliant on Division Rivals wins with specific types of players may have put some users off completing the card. Scoring a goal with players of maximum 75 Pace and a minimum of 80 Physical in separate Division Rivals wins, as anyone will know that has played competitive Rivals matches, is a very difficult task. Especially at higher skill rankings when facing top teams pretty much every game, it was very difficult to complete objectives in a timely manner.

Luckily in Mesut Özil’s Objectives for the 2nd half of the promotion, while we still have some Division Rivals Objectives, they look a little more achievable for the average player. 10 Goals in Online Mystery Ball Matches is easily doable for the more casual player, 10 Assists from Through Balls in min. Semi-Pro Squad Battles is a simple objective, 10 Goals with Germans in Rivals is relatively doable too. 3 Assists in separate Rivals wins with a player of maximum 70 Physical and minimum 80 Passing may sound like a difficult task, but players like Messi, Neymar and CR7 still fit into that category!

On the whole, I think the objectives have majorly improved from the first to second half of the promotion, and I’m excited to see what EA do with them going forward with further promotions! 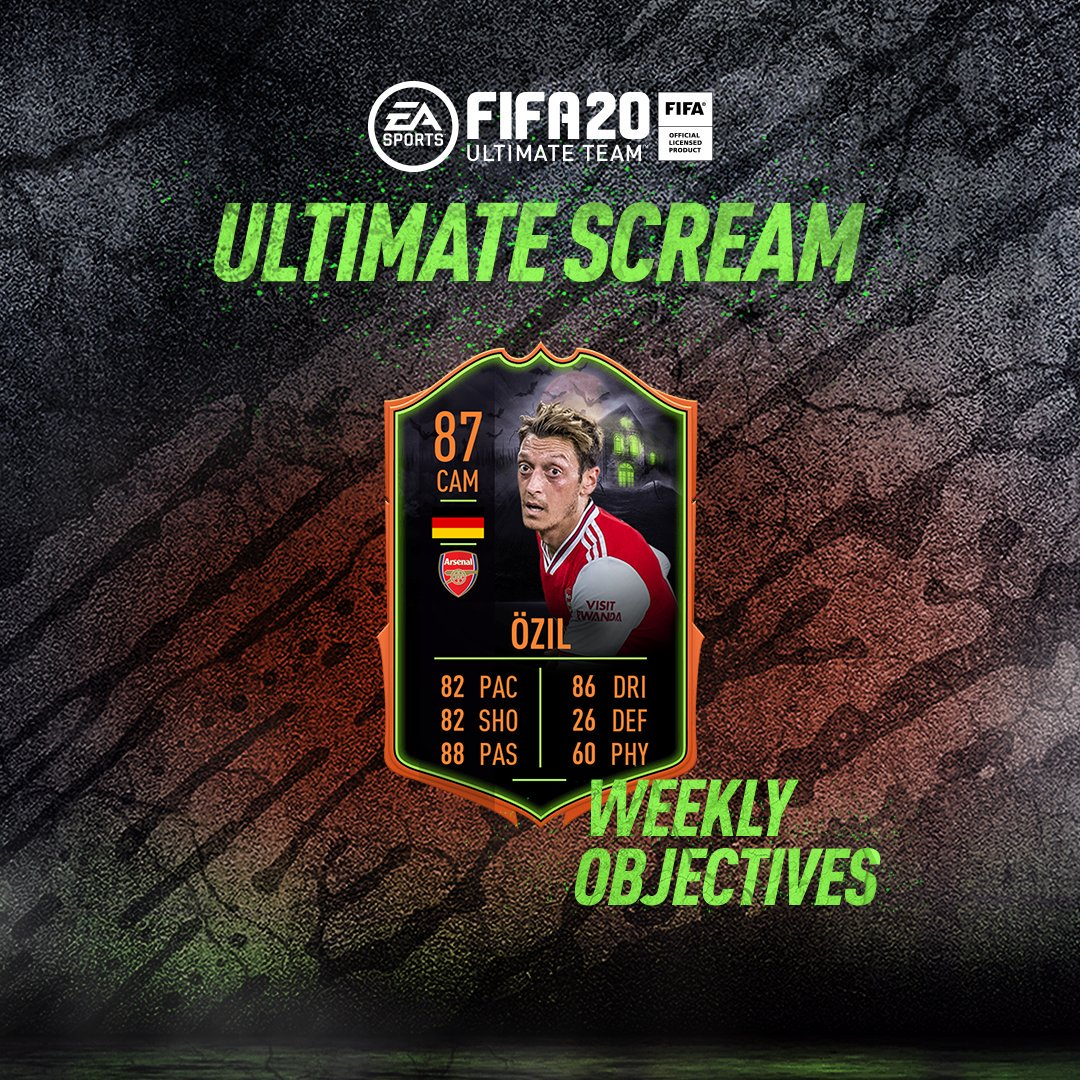 Follow us on Twitter for the latest FIFA 20 news. Tweet us with who you’re excited to use in the Ultimate Scream Promotion, and how you would rate the promotion!