Fortnite Season 11 was widely anticipated to be the next stop in Fortnite's chaotic road, but in an unexpected twist, it appears that the next phase is Fortnite Chapter 2. Here's what we know.

The new Fortnite Chapter 2 update, arriving after the now-famous 'The End' event finale, left players in a state of panic and confusion. Fortnite Chapter 2, formerly believed to be Fortnite Season 11, features a host of new modes and changes to entice fans and improve the game state. After an extended downtime after the end of Season X, players are once again diving into the fray.

Much to the displeasure of many, players were left staring at a black hole that refused to budge after the end of Season X. During the live Fortnite event we saw the seven visitors launch through multiple rifts and they ultimately crashed into the "Zero Point" which was nestled in Loot Lake. After this, players were sucked out of the map and now everyone is stuck in a black hole loading screen which was assumed to be the downtime for Chapter 2.

Be sure to bookmark this page and check back regularly for the latest information on Fortnite Chapter 2. Some new weapons have also been leaked ahead of the official launch of Chapter 2 Season 1. It also appears that they have re-skinned a lot of the exsisting weapons as we see leaks coming in of old weapons but with a new look to them.

Since the battle pass trailer for Chapter 2 Season 1 has already been leaked, we know all the skins that will be avaiable for players to unlock as they progress through Seasonn 1. As seen in the trailer, there are numerous amount of features that are also being implemented during this brand new chapter of Fortnite. Some of these new techniques are going to be amazing at first glance and it is very exciting to see how some of these will play out.

Some of the new features coming to Fortnite Chapter 2 are: ShiinaBr confirmed that Chapter 2 will begin TODAY at 2.05pm BST!

ShiinaBR on Twitter has revealed that Chapter 2 could be with us TODAY. 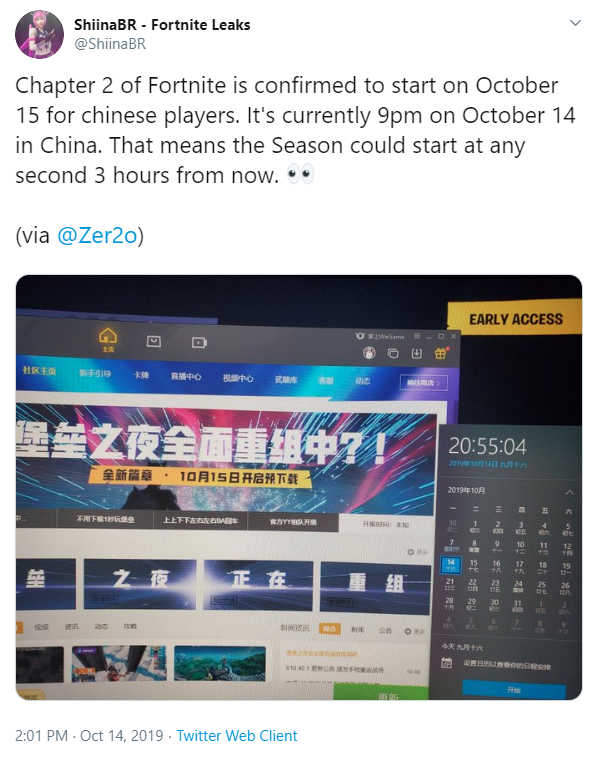 As of 11:00 EST, the event files have been opened by Epic Games and data miners have started to dive into them which contain all the files about the events. It has been confirmed that the rocket that was being built at Dusty Divot will launch during the event and fly into the rift much like it did during Season 4. There has also been confirmations of the meteor that was frozen over Dusty Divot for the whole of Season X will crash into the ground.

Apple have uploaded the first Season 11 image too early to the App store, which has been reported by ShiinaBR on Twitter. 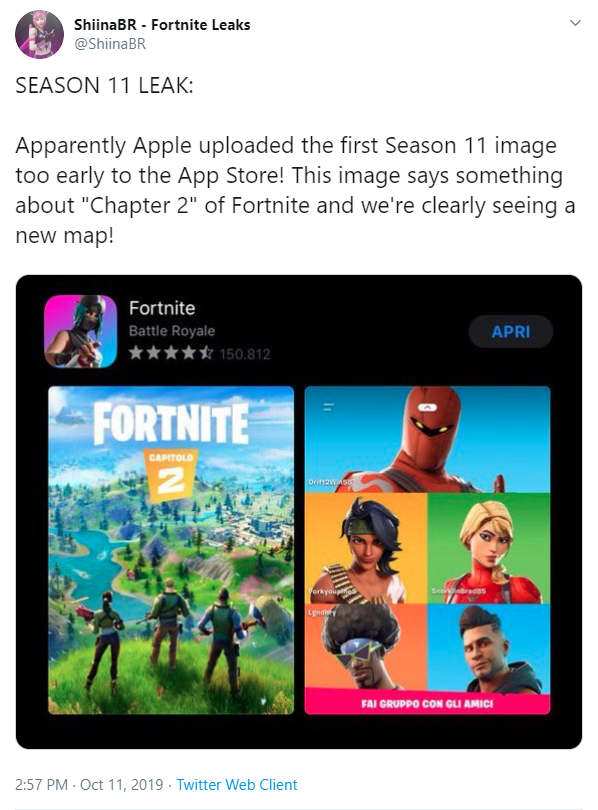 What Do We Want To See In Chapter 2?

We expect to see some weapons unvaulted. In particular we wish to see the Hunting Rifle, Tactical Assault Rifle and Shadow Bomb make a triumphant return.

As we've stated before, many new features and changes will appear within Fortnite Chapter 2. Something that is far over due is the option to disable pre-edits, as well as edits starting from the camera angle and not the pencil. Many will agree with us when we say that we wish to see the Mechs removed, as they were a common issue with the gameplay in Season 10. We'd also like to see an FOV Slider added to the game.

How Can I Get Ready For Chapter 2?

We recommend that you consult our Chapter 2 Tips and Tricks guide to get yourself ready for the new season. We'll also be updating this once the new season begins so you can rack up as many wins as possible.

It’s doubtful Epic will change their pricing structure so expect the same as previous seasons. You’ll be able to buy the Season 11 battle pass for 950 V-Bucks ($10) and the Battlebundle for 2800 V-Bucks ($30) to unlock the first 25 tiers. You’ll also be able to purchase individual tiers for 150 V-Bucks.