In Football Manager 2020 there will be a number of great free agents to choose from, here are 10 that we recommend picking up.

Football Manager 2020 release date is rapidly approaching and it's set to be another great year for the game. There are a lot of fantastic teams to manage in FM20, many of which will need new squad members to round out the roster. If you're a club with a tight budget or in need of some back up players, its always worth looking into the free agents that are available. In Football Manager 2020 there will be a number of great free agents to choose from, here are 10 that we recommend picking up. If you're looking for a last minute addition to the squad, to fill in as a back up, Andrea Raggi could be a good shout. His physicals have not declined massively enough to be considered useless, has fantastic mentals and solid technicals. At 35 years old he will likely not require much in terms of wages. 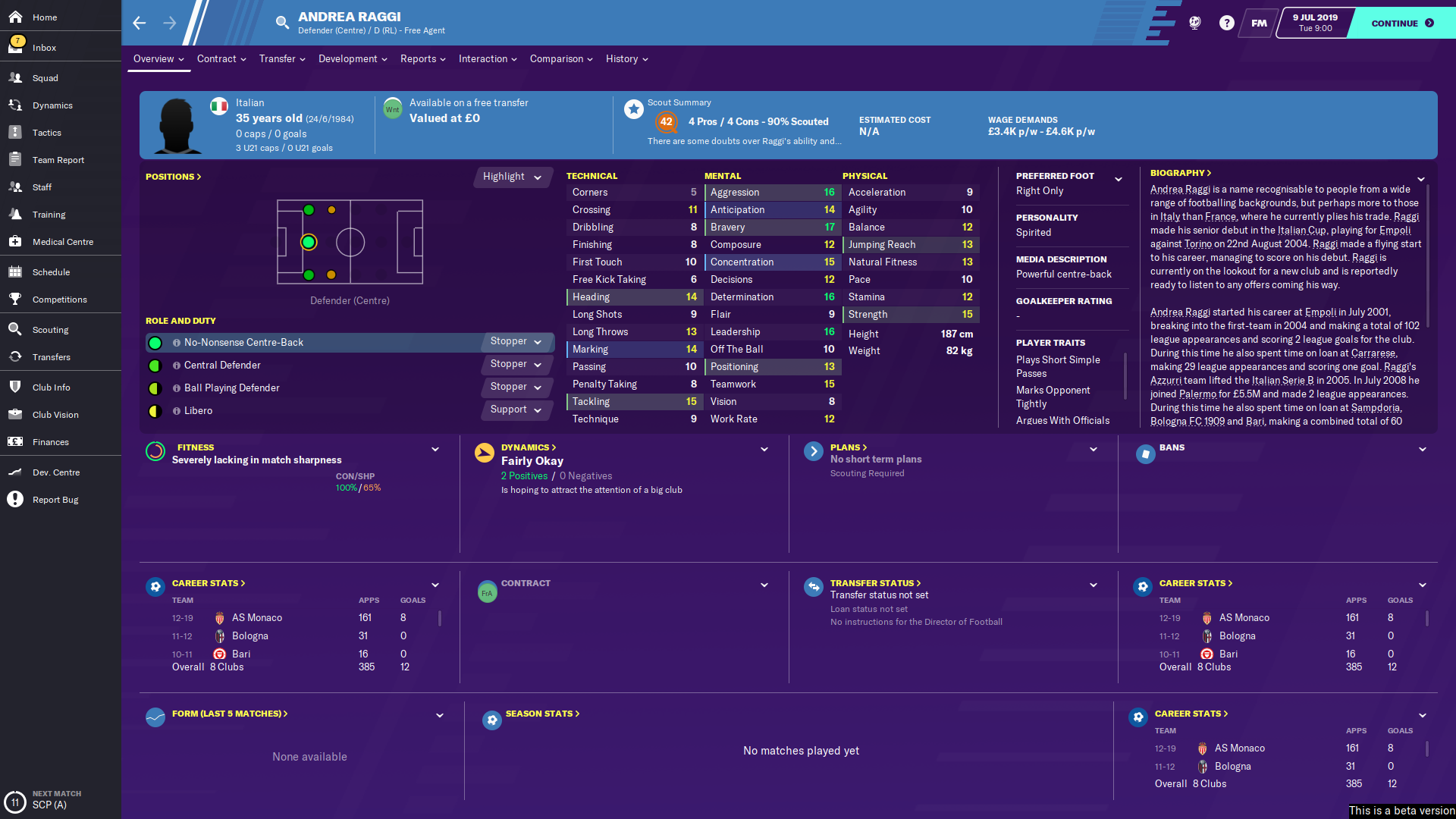 It's no surprised that, one again, Emmanuel Emenike is looking for a new club. He's by no means a standout performer, but when I've picked him up in previous games he's done a job of being an impact substitute. His stats have seen better days, but could fit in to a promotion candidate club. 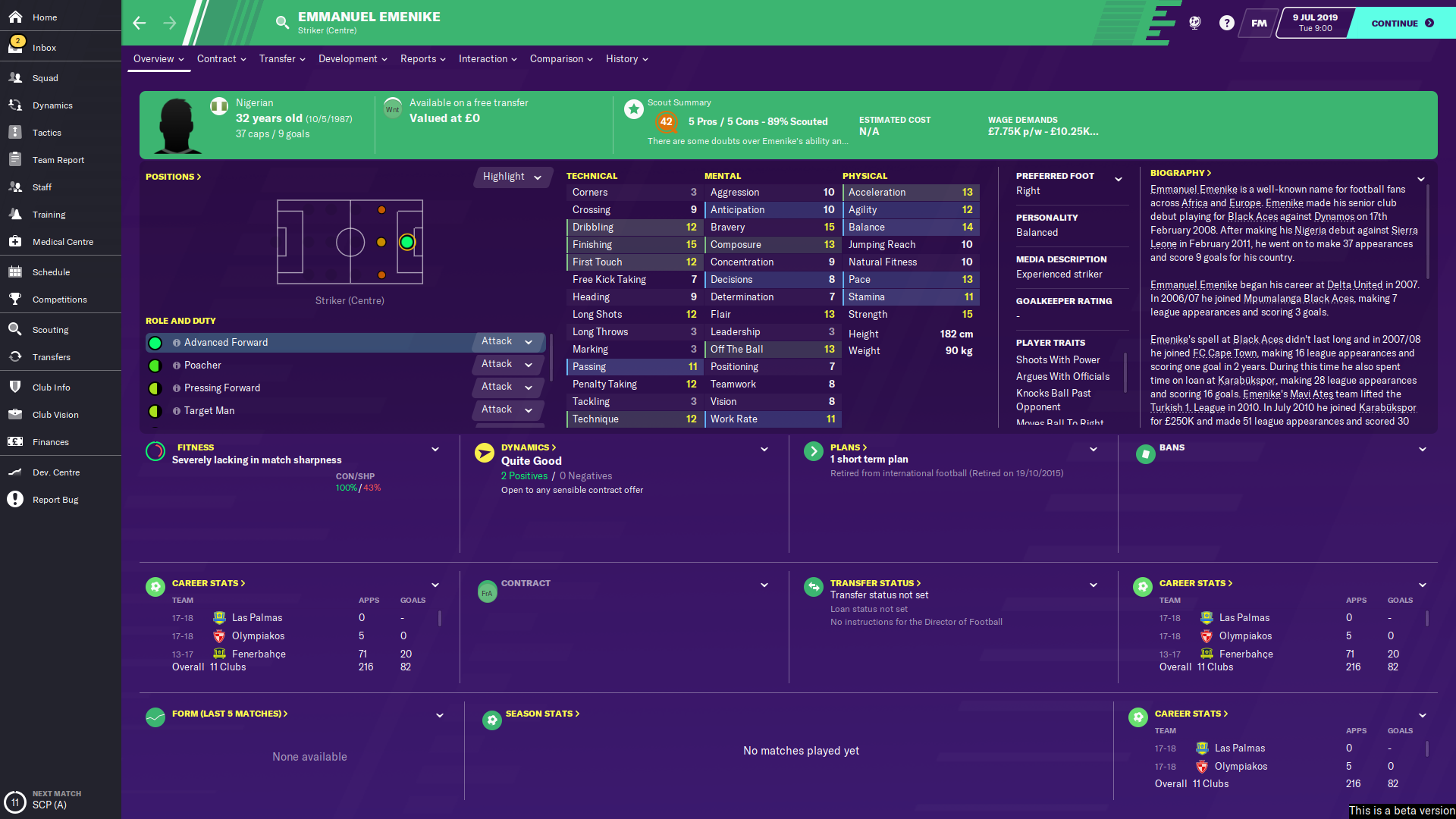 Fabio Coentrao is approaching the later years of his career, but you could argue he's still a great full back. Mentally and technically, he's still as good as any of the top players; he could be a great option to turn to if you're trying to bolster your squad numbers. 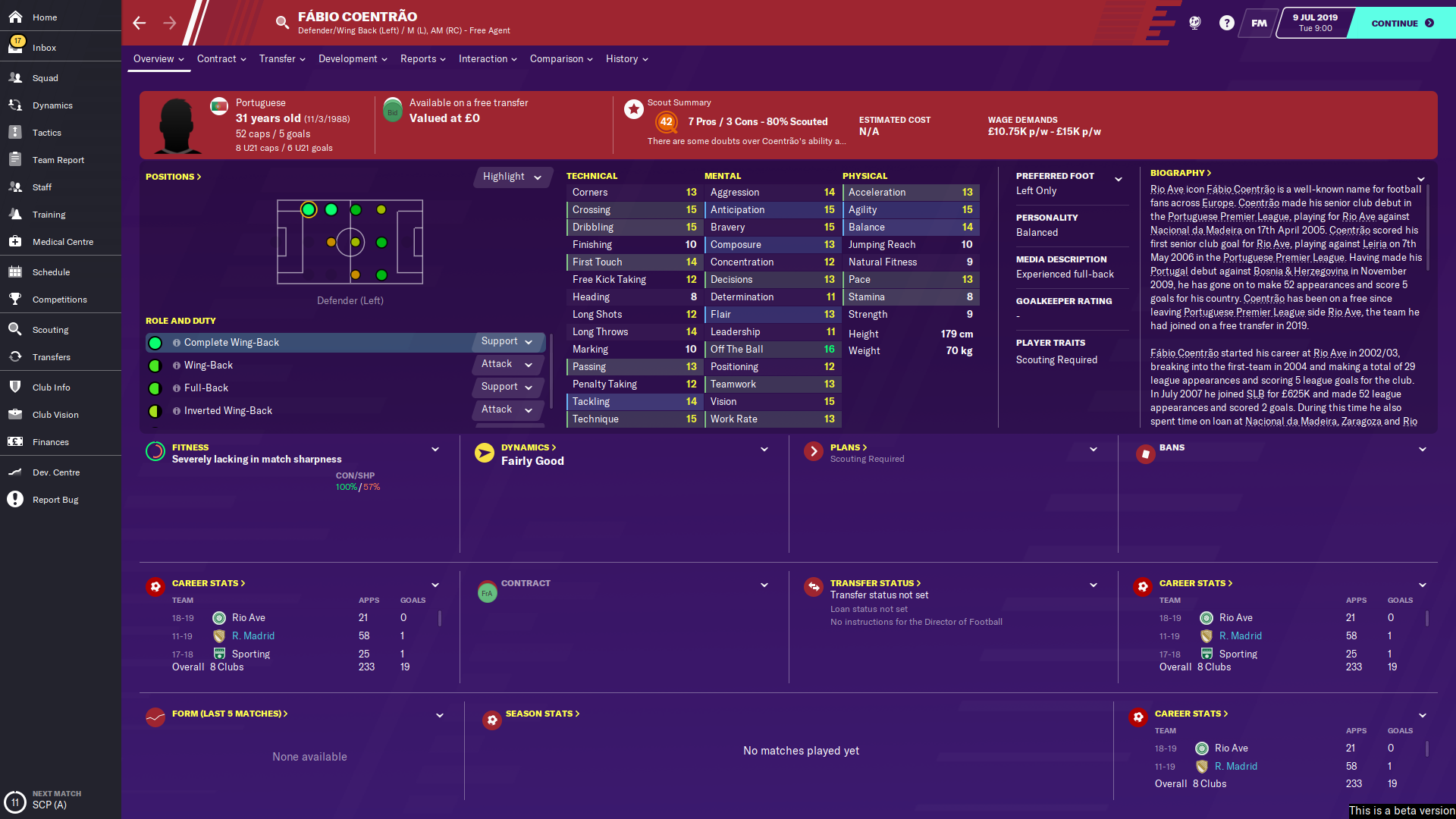 The 38 year old may be as slow as they come, but in the dying moments when you're looking to park the bus he could prove to be a reliable ball winning option or a home grown option for any Premier League club. 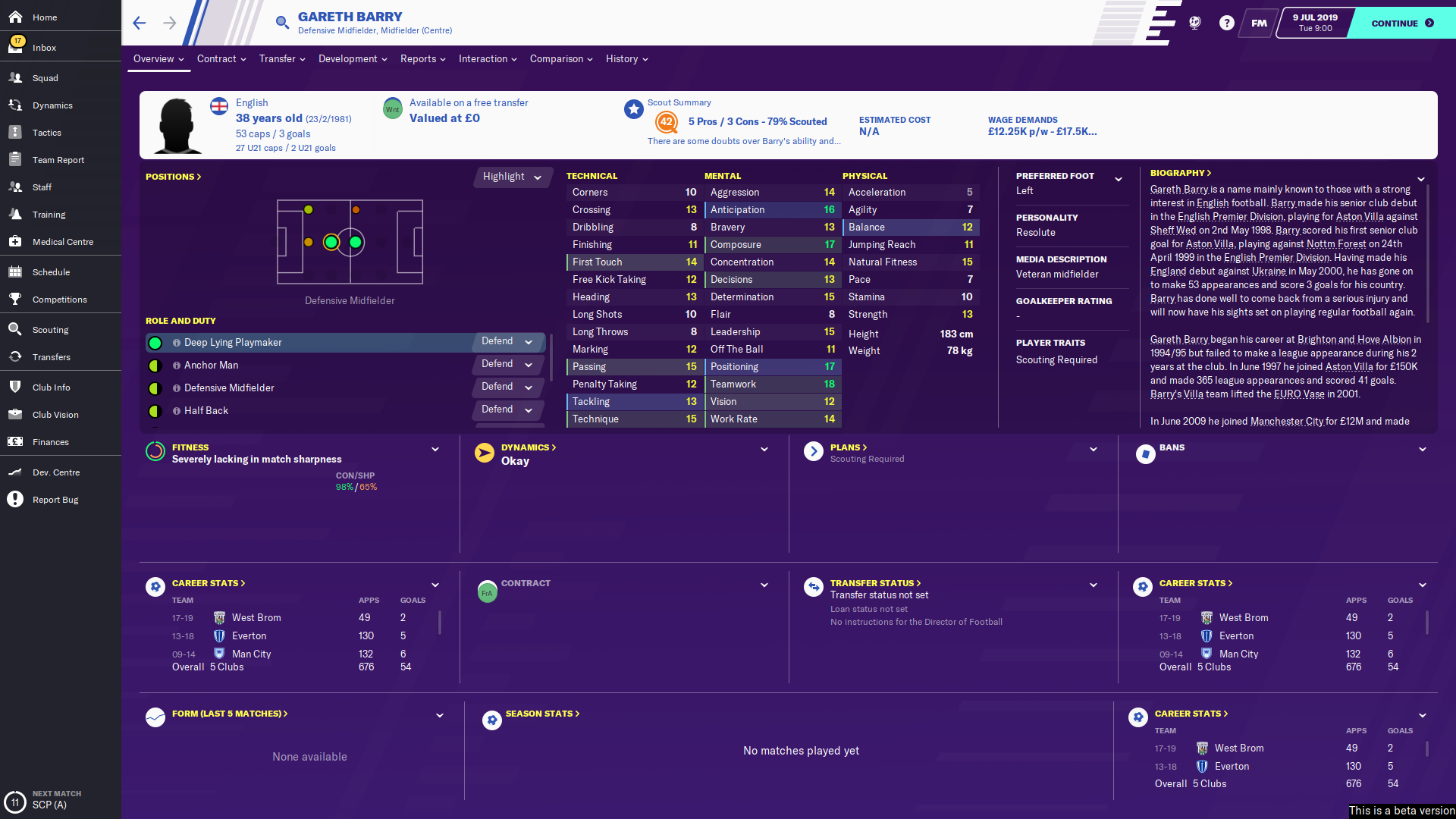 Hatem Ben Arfa has always been a victim of his own attitude, which has always hindered the potential of a fantastic footballer. Fresh off another successful season in France, if you're looking for a creative addition to your squad in Ligue 1, Ben Arfa could be the way to go. However, the unpredictable nature of his behaviour can be a frustrating trait that few managers want to deal with. His mental stats are shocking and it's no wonder he hasn't found a permanent home for a long time. Are you willing to take a risk on him? 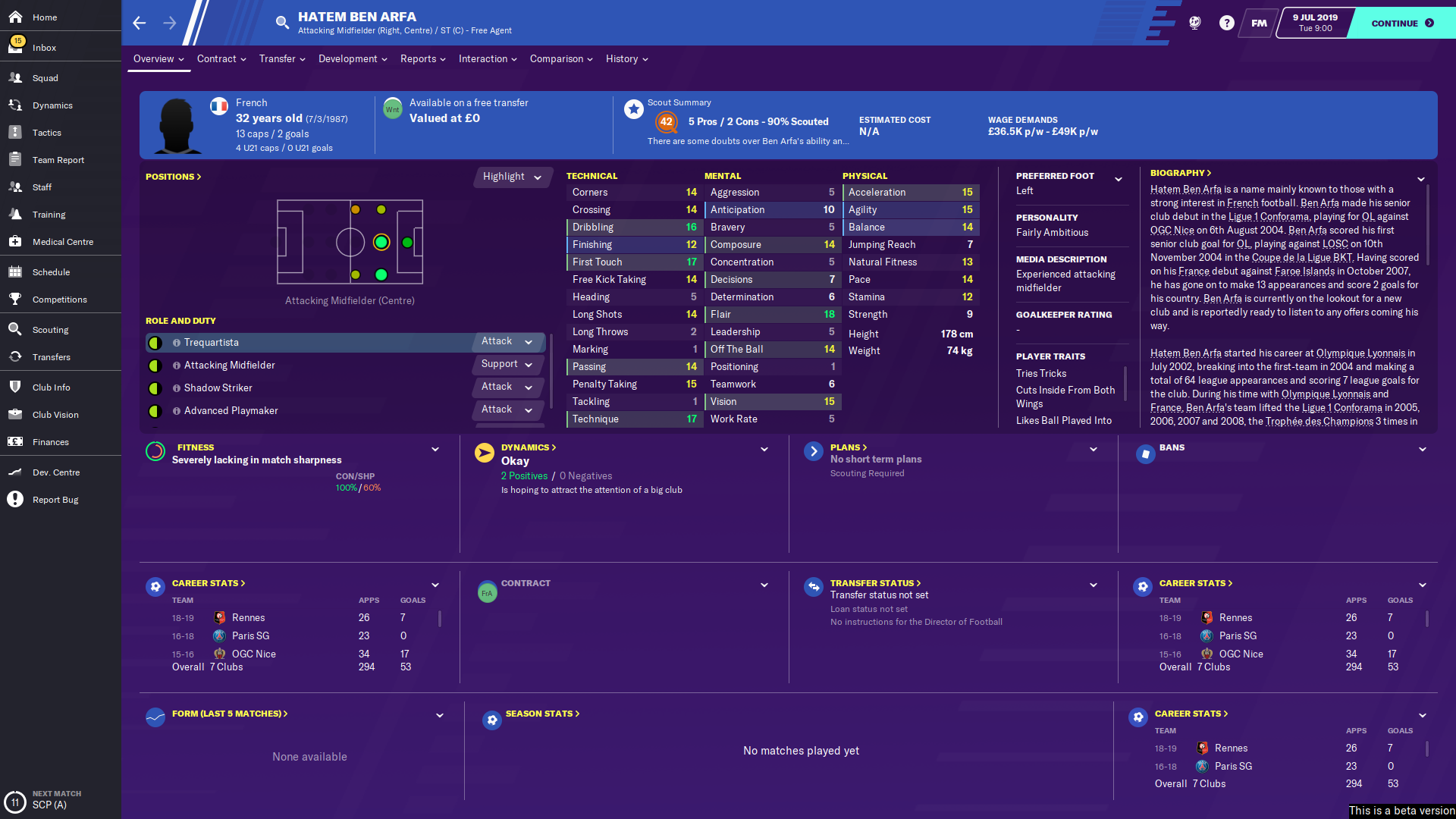 Ignazio Abate has pace and power in his locker. Abate would be a good back up signing for any team. His passing and crossing are not fantastic, but he's certainly a solid old school full back.

Probably the best free agent on the list is Ivan Strinic. Ivan is a serious go to full back for any team, with such well rounded stats and could still be at the top of his game for a few years to come. 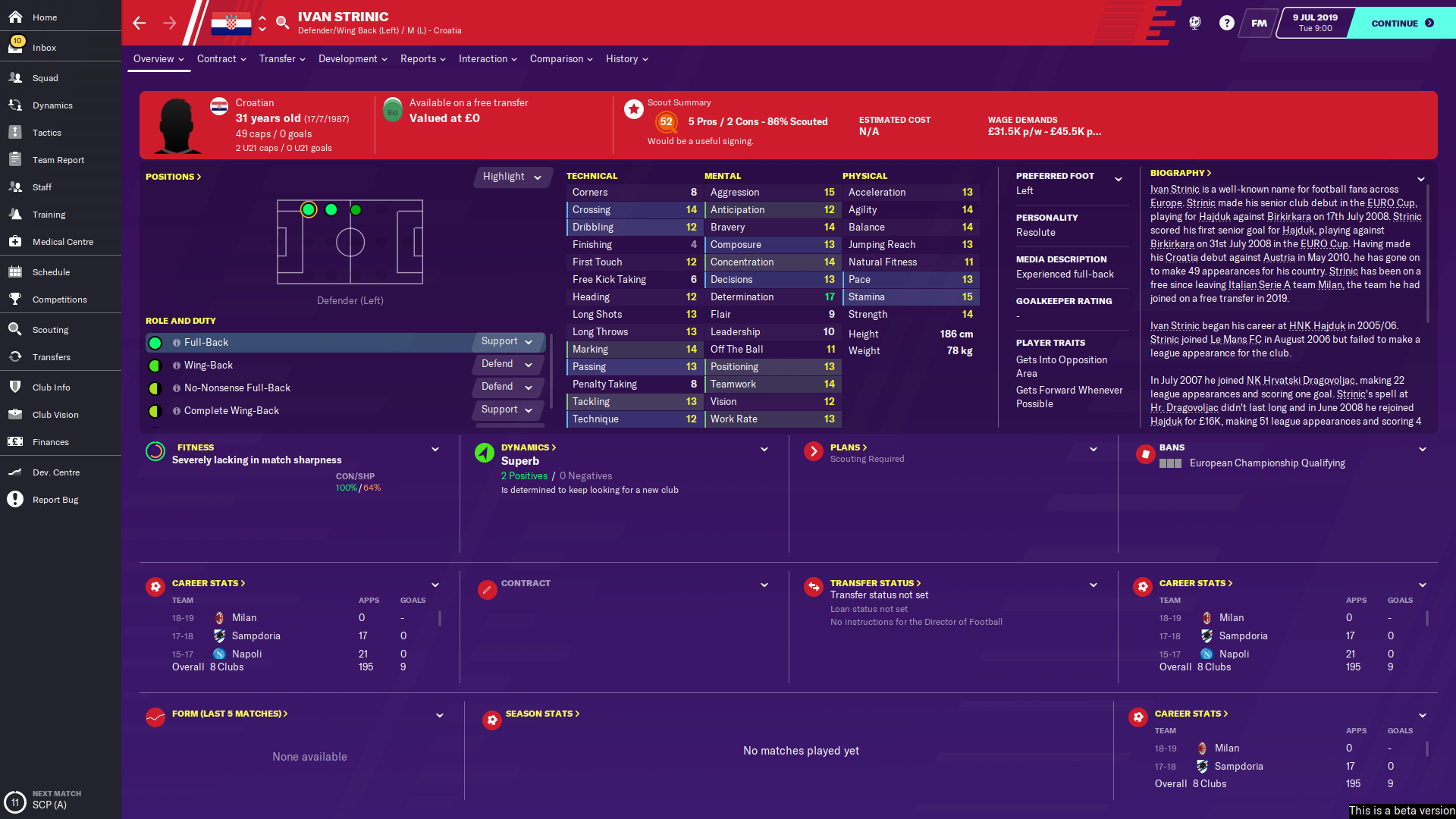 Juan Folin looks like an incredible pick up with first team worthy stats, despite a lack of fitness, he looks like he could be a top player for some time to come. 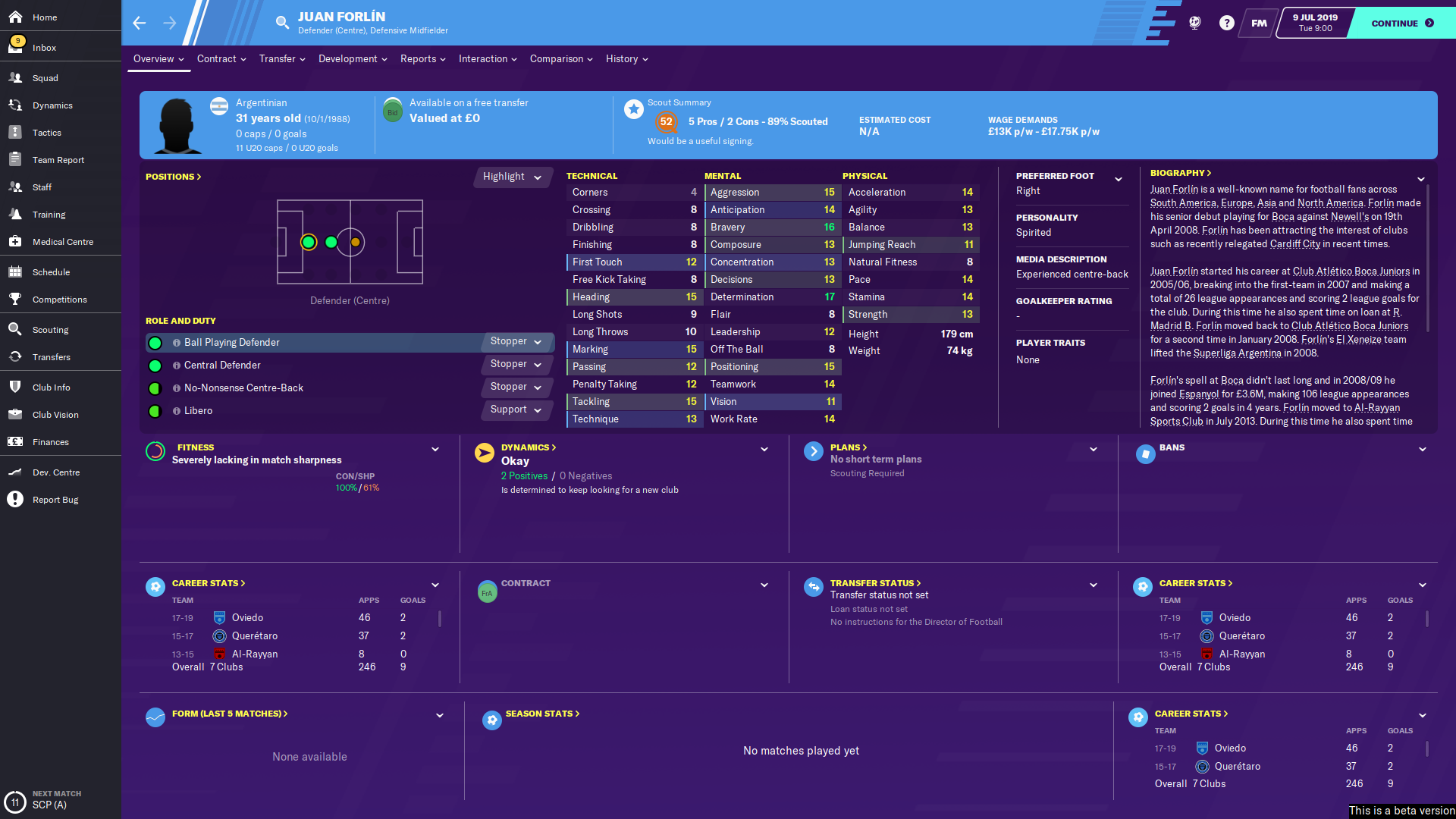 It's stunning to think that a 26 year old, with stats like this, could be allowed to leave on a free. Lucas Silva has plenty of playing time under his belt and boasts great stats, but falls short in the his physical department. His wage demands will be rather high and it could be hard to land his services, as I can imagine many clubs will be after him. 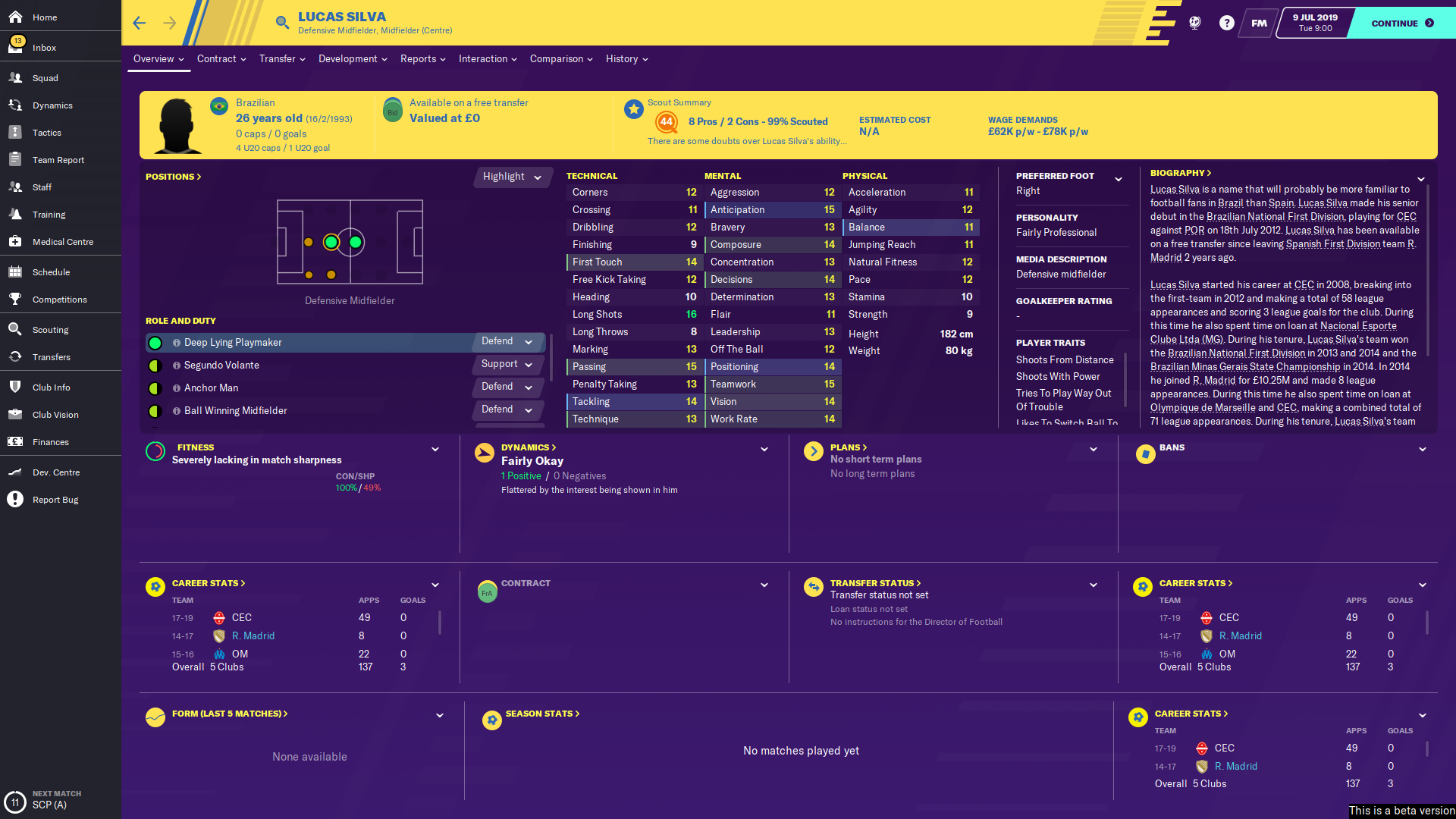 Nicolai Muller looks like a player who was just a few stats shy of being a great player. However, he's someone to consider if you need to bring in a back up option on the wing. 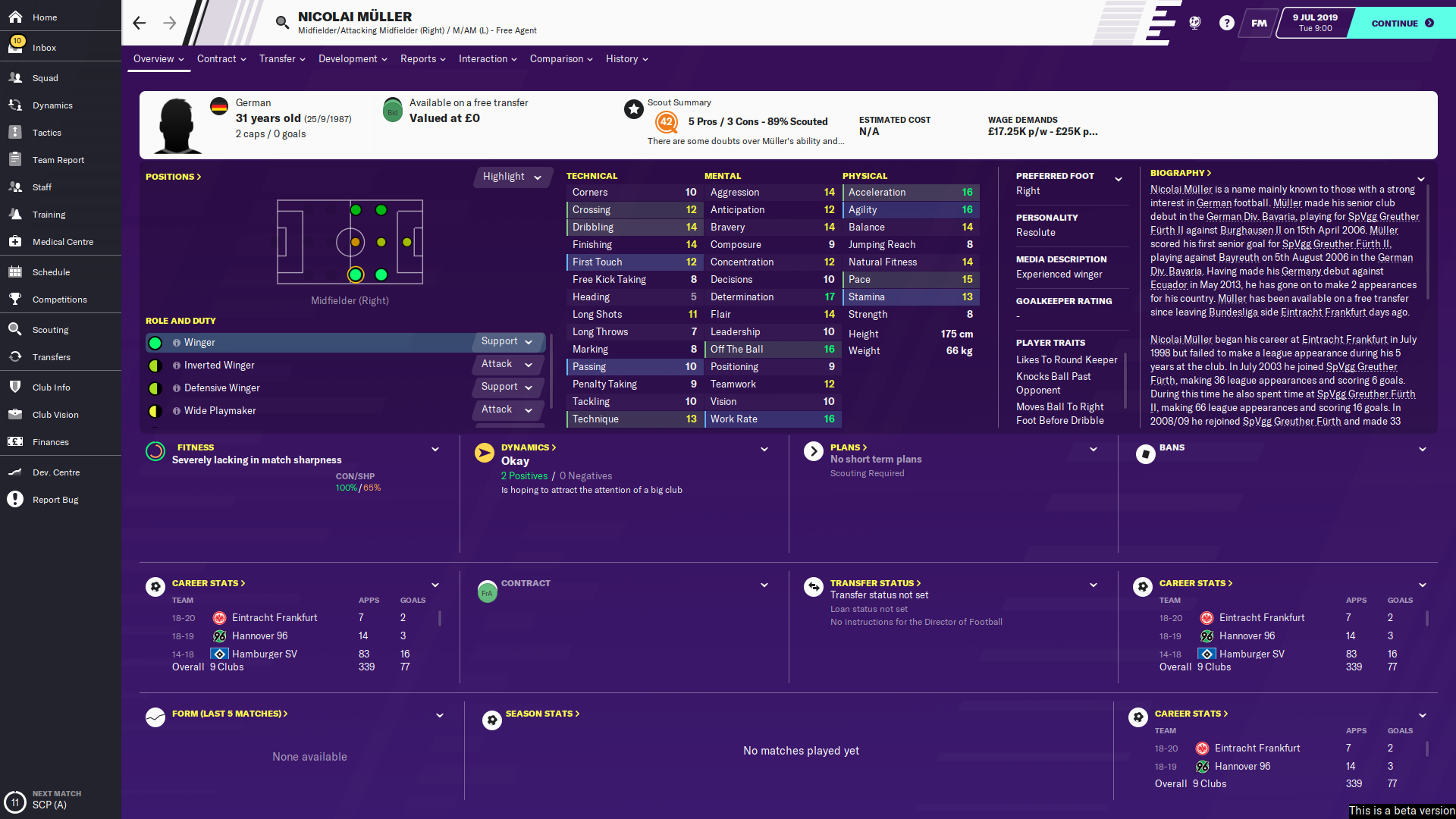 Rolando could be worth considering, he has good mental stats and the attributes you want in a centre-back; great in the air, defensively solid, composed under pressure. His physical stats are declining and you may only get one season out of him. 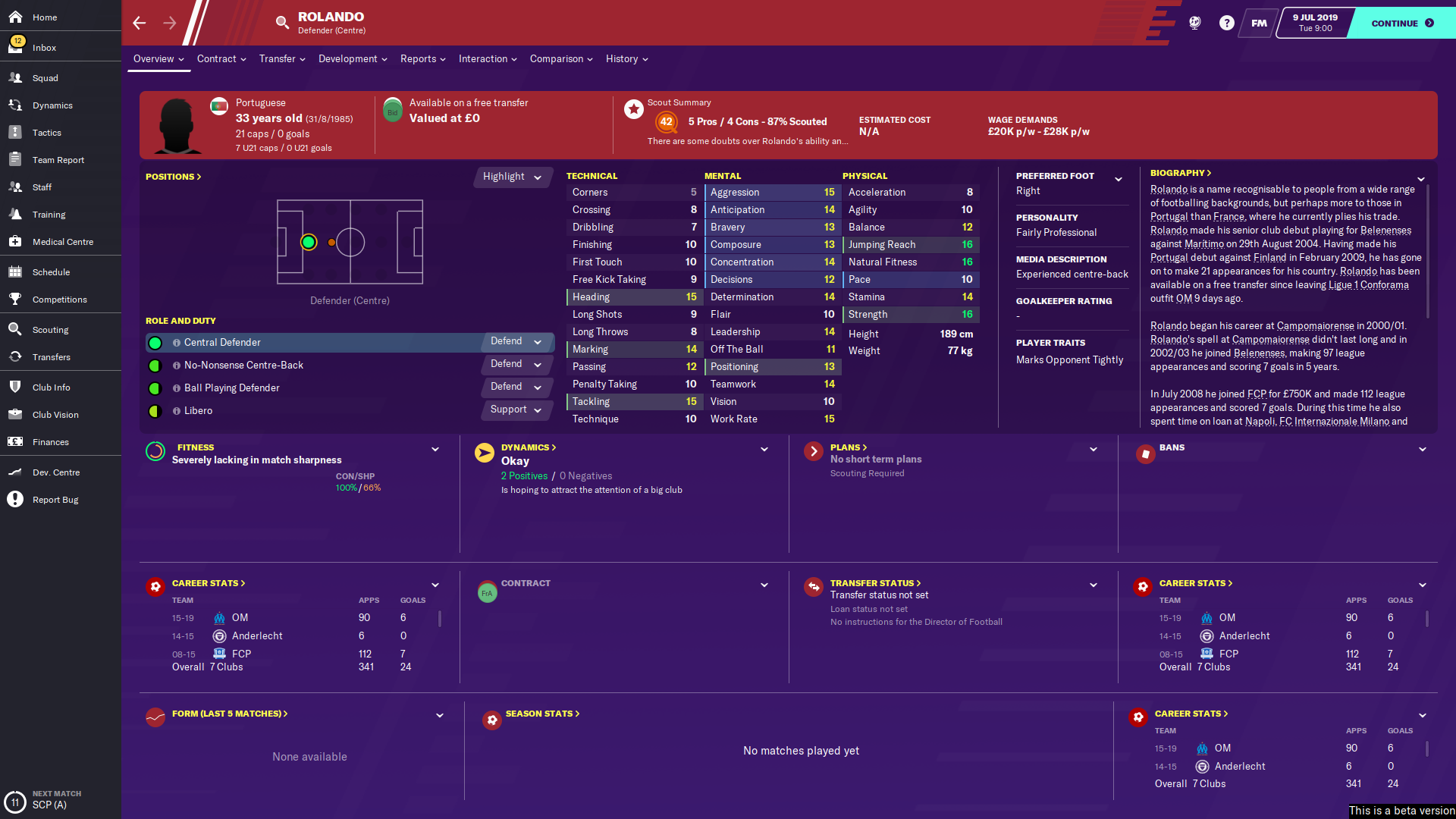 Sulley Muntrai has been around the block and can provide teams with a solid shift. Grante you're not likely to start him, but can be a great option to help see how it a tense game. 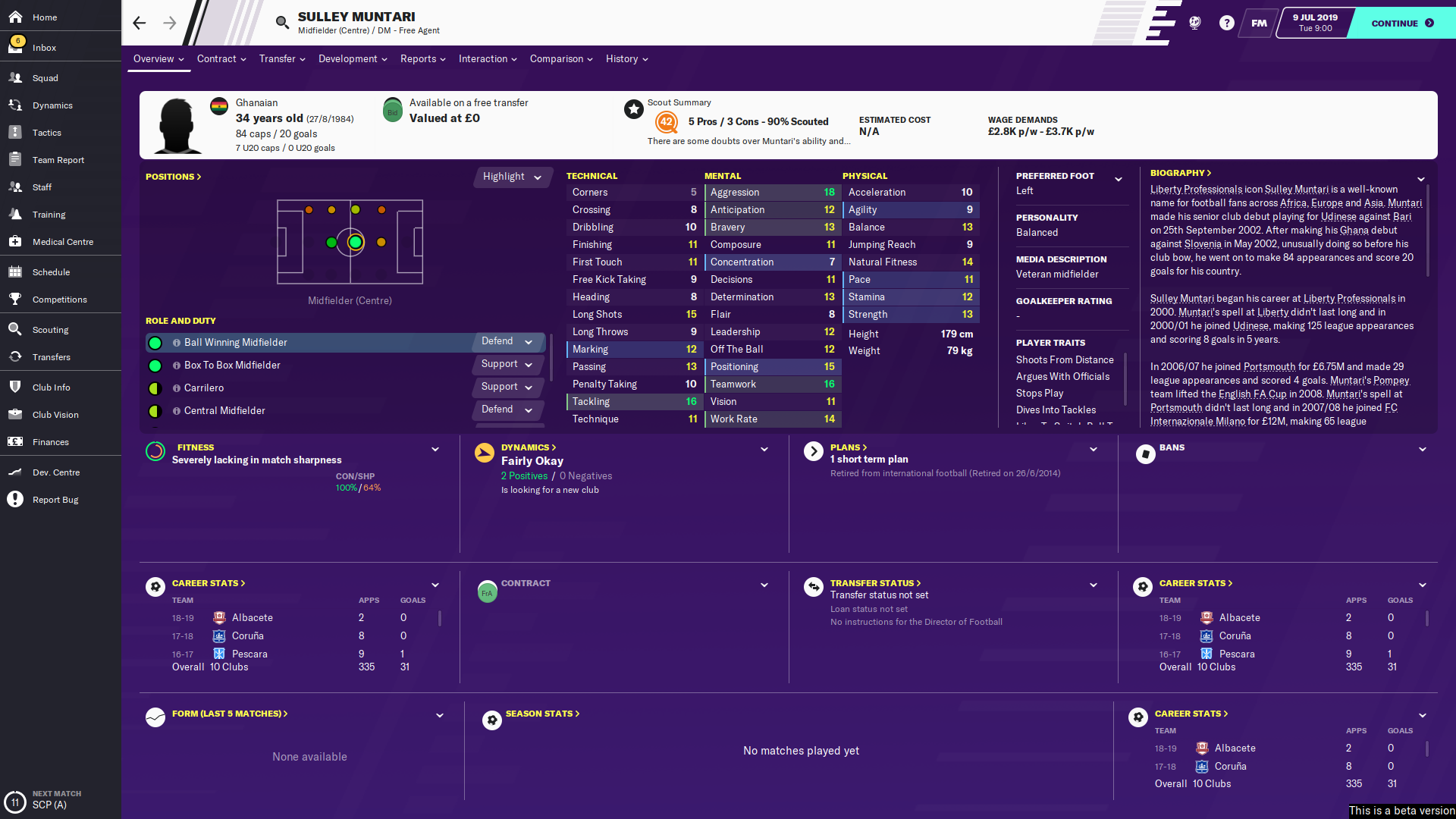 Another midfielder that's slipped under the radar is Yoann Gourcuff, a technical wizard who will link up well with your striker. 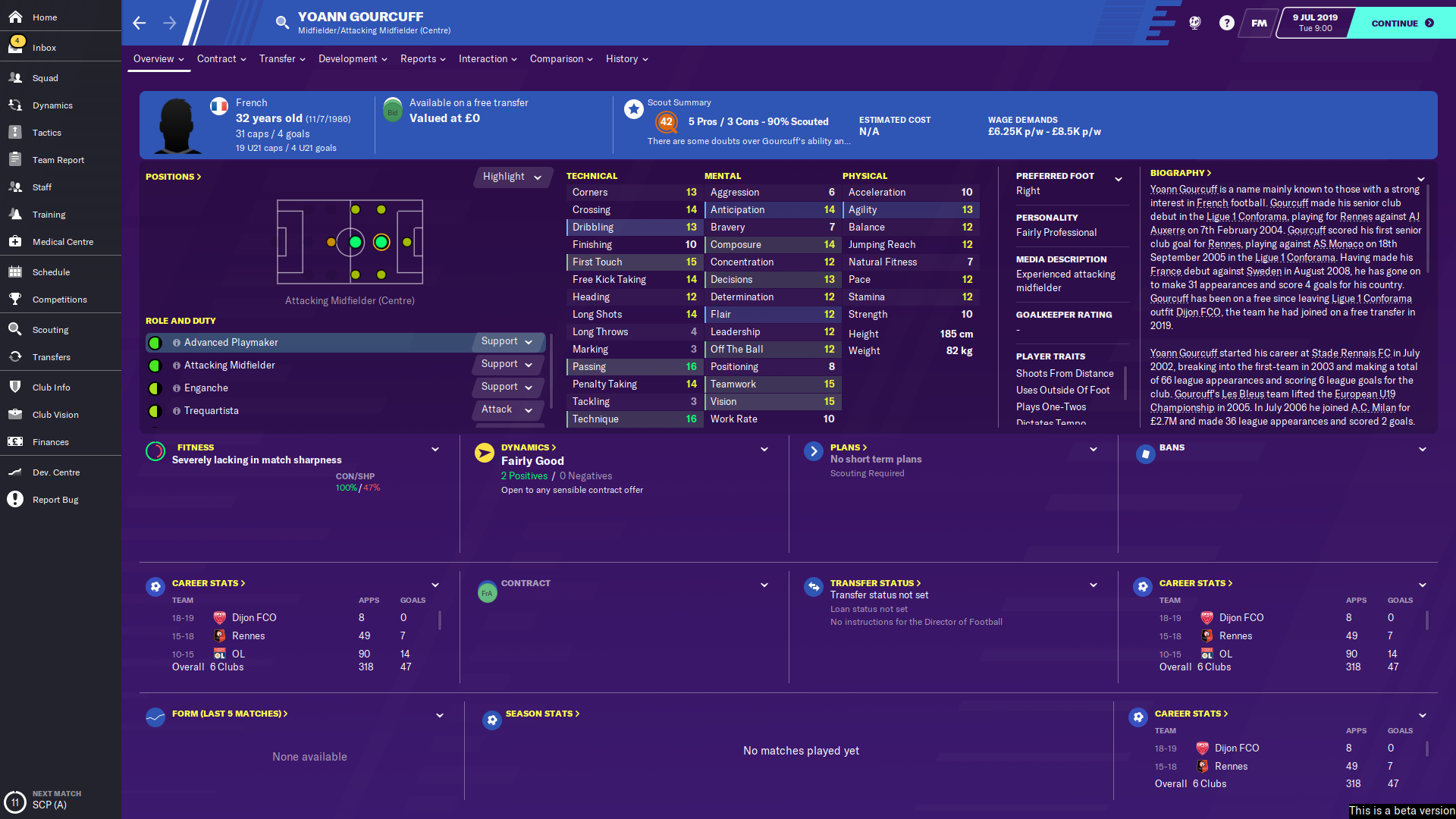 Younes Kaboul is still kicking about and could be a good centre back option for a team in need. He lacks pace but will be a solid addition to any squad. 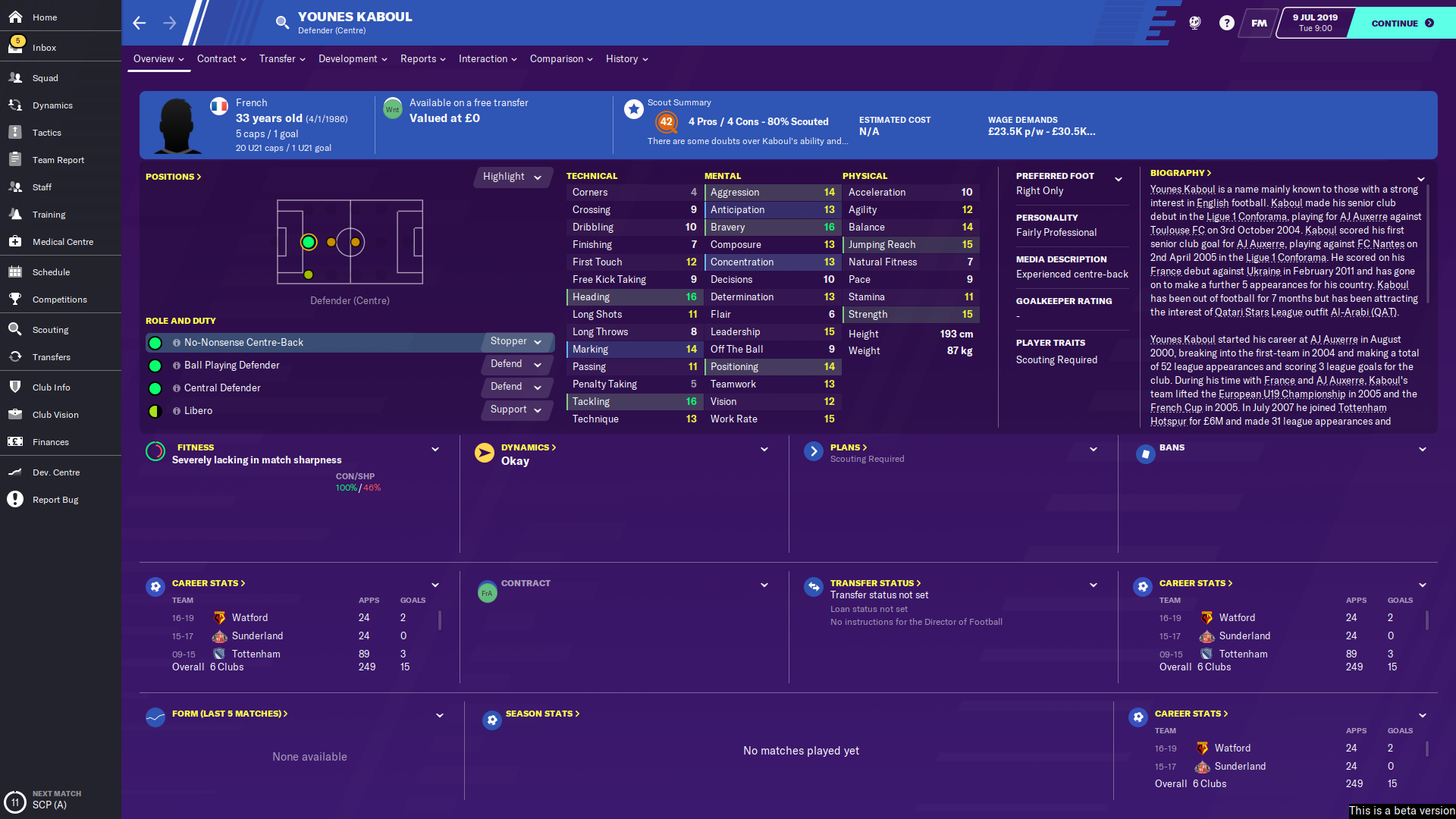