Check out the dates, schedule and predictions for CWL Miami 2019.

CWL Miami is the culmination of all the hard work our 16 teams have put in over the course of the CWL Pro League season. Eight teams booked their places into the finals already with their exceptional placing in the Pro League, with two more joining via the play in bracket.

For the amateur teams, CWL Miami is a chance to compete against some top opposition and a chance for them to win a share of $250,000 in prize money. The top 16 teams will also book their place in Los Angeles at the season-ending world championship.

This is the first event since the latest 'Operation Apcolaypse Z' update went live. In this article, we’ll be taking a look at playoffs, the play-in tournament and which amateur rosters have a chance to qualify for champs. CWL Miami takes place on the 19th-21st July. It will take place at the Miami Beach Convention Center. Tickets for the event can be purchased here.

Friday 19th July stream start times and schedule is below: OpTic Gaming, Gen.G, FaZe Clan, Team Reciprocity, Splyce, 100 Thieves, eUnited and Team Heretics all managed to secure their place in the playoffs after solid performances throughout the season.

Heretics and Reciprocity will start in the first round of the double-elimination bracket, while the other six teams will begin their playoff run in round two. Back-to-back champions 100 Thieves will do battle with a strong FaZe roster in their first game, while Gen.G look to continue their impressive form with a win against a Splyce team that has yet to hit their stride.

With this season being one of the most competitive seasons for Call of Duty to date, the title of Pro League champion could be anyone’s guess! Judging by the last two events, 100 Thieves are favourites followed by the likes of CWL Anaheim runners up Gen.G, eUnited and FaZe Clan.

100 Thieves still look the best team in the game, so I think they will become three-time back-to-back-to-back champions at CWL Miami. As for second and third, it looks to be a much closer contest. Gen.G, FaZe and eUnited are all in contention for a strong finish, but with the likes of Splyce and Reciprocity yet to show their true potential, it is going to be a highly competitive battle for the top spots! The bottom four teams from each division will battle it out for the final two playoff places in a single-elimination bracket. Midnight Esports, Evil Geniuses, Luminosity Gaming, UYU, Elevate, Enigma6, Units and Team Envy will have to be firing on all cylinders if they are to book their place in the second biggest tournament of the year.

After the final rostermania period, Luminosity and the acquisition of Carson “Brack” Newberry and Cesar “Skyz” Bueno looks to have given the team new life heading towards the latter half of the season. It’s been a turbulent season for Luminosity. Since winning CWL Fort Worth, the team went on one of the biggest downward spirals ever seen in Call of Duty esports. Heading into the play-in tournament as the favourites, they’ll be looking to end the season on a high note.

The Franco-American mix of Elevate have also impressed with Wailers “Wailers” Locart beginning to display his prowess with the ICR Assault Rifle. After losing Paul “Breszy” Breszynski to E6 and Skyz to LG, Elevate have managed to rebuild their roster with Austin “Believe” Smith and Andres “Lacefield” Lacefield joining the team. They do not have an easy path to secure a place in the playoffs, taking on Midnight in their first game followed by a likely encounter with Luminosity in round two.

Despite this, they did manage to take OpTic Gaming to a game five decider in the regular season - there is a definite possibility that they are able to make it.

A player to keep your eyes on is John “Xotic” Bruno on Evil Geniuses. Frequently seen towards the top ten in the statistic charts, expect him to be firing on all cylinders as EG battle to make playoffs. 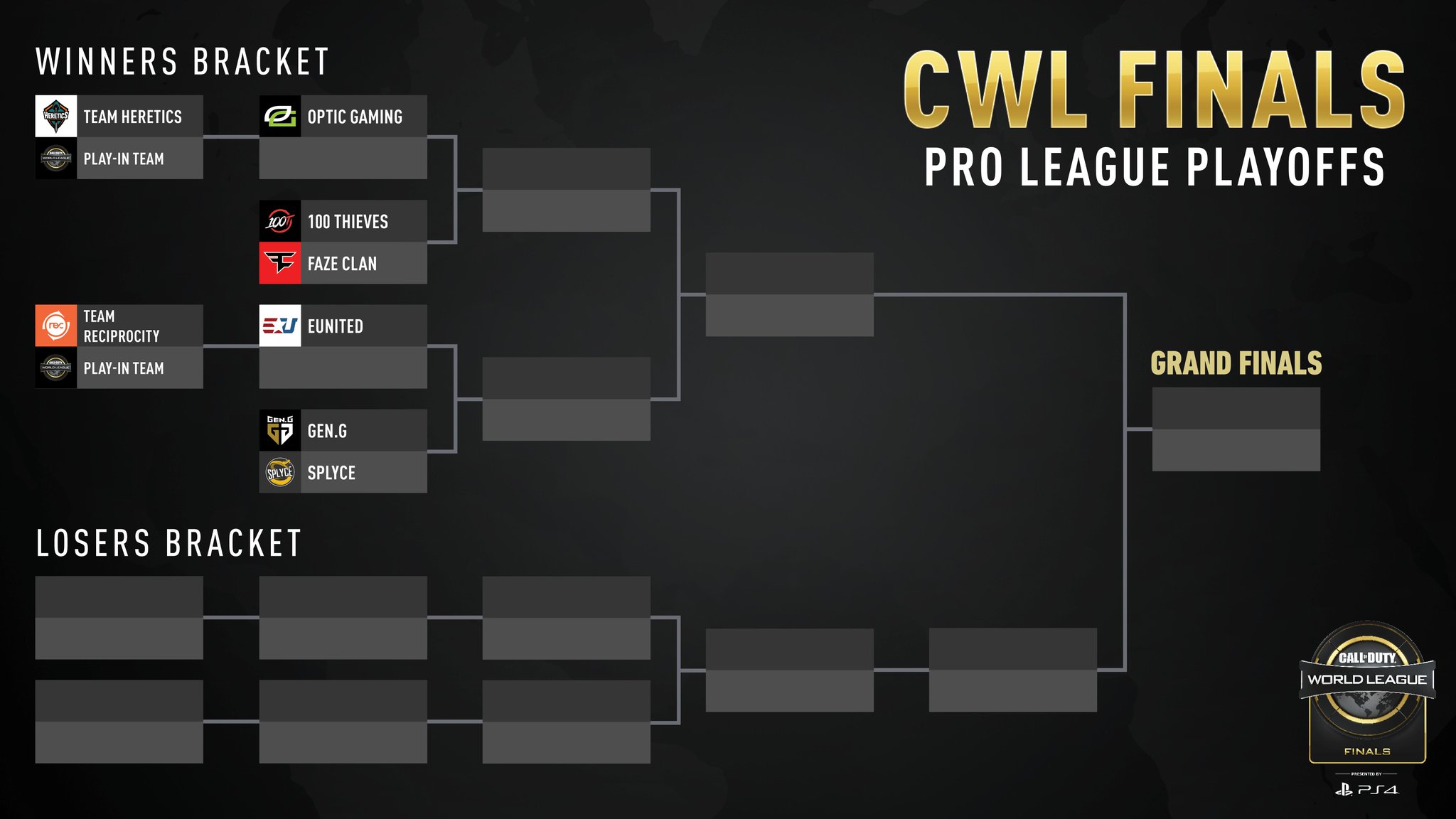 Luminosity are the team to beat in the play-in tournament. The new-look roster is heading into the play-in with a few wins towards the end of the regular season, which will be big confidence booster coming into the single-elimination bracket against some strong teams. Team Envy and Units are the dark horses. Can Envy somehow make it through the bracket and into playoffs after a disappointing regular season? Units are fielding some household European names along with some explosive young talents. Are they able to rebuild a sub-par season with a solid finish ahead of champs? Rounding off the amateur circuit will be the final tournament of the season, where teams from across the world can book their place at the world championship in LA. With the likes of Ben “Bance” Bance, David “Dqvee” Davies and Tom “Tommey” Trewren all attempting to build a team that is capable of taking down the Australians of Mindfreak.

With 16 spots at champs and a $150,000 prize pool to boot, the stakes have never been higher for teams outside of the Pro League. A good performance here, followed by a solid run at champs, could propel some aspiring talents and some veterans back into the top level ahead of the release of Modern Warfare 2019 on October 25th.

Mindfreak are certainly the team to beat outside of the Pro League, having taken home the title in London and Anaheim from the loser’s bracket. With several top teams from across the world expected to be in attendance, there is potential for a team to knock the Australians off the top. Along with all the competitive Call of Duty action, the All-Star Game makes its return for the Black Ops 4 season. Fans from across the world will have the chance to vote for one player from each playoff team to take part in the showmatch. The remaining two players will be selected by the ever knowledgeable CWL analysts. Make sure to check back here when the teams are confirmed for what is always a highlight of the CWL season! The teams are in! Ten superstar players from Division A and Division B will battle for bragging rights in the Miami All-Star Game which will take place as the final game on Friday 19th of July.

Who do you see taking home playoffs and do you think anyone can stop Mindfreak in the amateur finals? Tweet us!

Gamescom 2019 arrives in August and we're likely to hear a lot about the new Call of Dury. Read more about Gamescom here.