When Does Little Nightmares 2 Release? Confirmed Release Date and Price

Tarsier Studios will be releasing its second game as apart of the Little Nightmares saga within 2021.

The first title was released all the way back in 2017 and was one of the most heavily praised games from that year.

Racking in over 15,000 reviews on Steam, with an average rating of 9/10; the sequel is highly anticipated among fans.

So, when can fans of the series expect to jump into the second title?

It has been confirmed via the Steam listing and other online stores, that Little Nightmares 2 will be releasing on February 10th, 2021.

Check out the following screenshot from the Steam store of Little Nightmares 2! 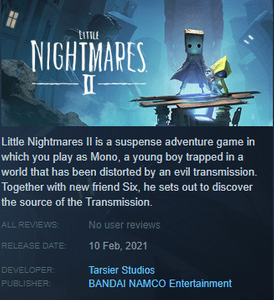 As well, in case you were wondering what the game is about, here is the official description via Steam!

Little Nightmares II is a suspense adventure game in which you play as Mono, a young boy trapped in a world that has been distorted by an evil transmission. Together with new friend Six, he sets out to discover the source of the Transmission.

The game is also going to run players $30 USD for the standard edition, and around $40 for the digital deluxe edition of the game!