Like many games, Final Fantasy XIV suffered from a few delays and bumps in the road with regards to the content roadmap (understandably) because of the COVID outbreak across the world in 2020.

It's hard to see the 2021 content roadmap fully returning to normal, but we will hopefully still see a regular cadence of content come to the game throughout the year.

As we've seen in the past, new FFXIV expansions have typically been revealed at the annual Fan Festivals which take place around the world.

With Square cancelling all Fan Festivals in 2020-2021 due to the pandemic, you might be wondering when we'll actually learn about the games next big expansion.

However in their place, Square plans to hold a special announcement showcase in February 2021 where we might hopefully learn what is coming next. Although based on past comments from FFXIV Director Naoki Yoshida on Discord, it didn't sound as though he's quite sure what new info will be revealed.

For the time being, here's everything we know so far about the games next big expansion. 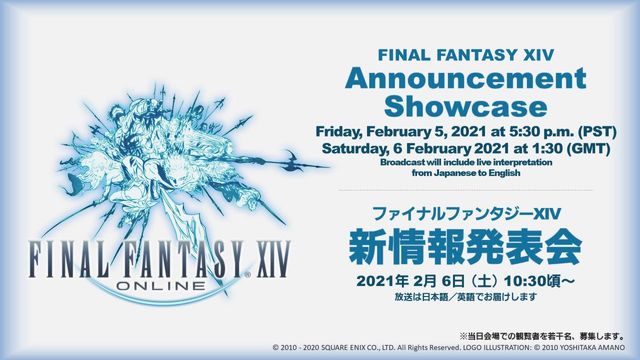 Way back in August 2018, just before the years next big Final Fantasy XIV Fan Festival, a trademark appeared online from Square Enix for a new Final Fantasy product.

That trademark was for “Shadowbringers“.

As we now know, Shadowbringers eventually released in July 2019.

Fast forward to October 2020 and a new trademark from Square Enix appeared online which some believe could be the name of FFXVI 6.0.

For those curious, that name was 'Forspoken'.

There's a very interesting write up by MassiverlyOP for those who want some mind-bending speculation on what this name could mean in the wider context of the game.

As mentioned before, the development process has been thrown into chaos due to the pandemic so it would be understandable if the FFXIV 6.0 release date is delayed somewhat.

That being said, in the past we've typically seen the games large expansions released two years apart in June or July of each year.

You can see the dates and version numbers for each major expansion just below:

With this in mind, until Square Enix announces otherwise, it's likely we'll see the next expansion released in June or July 2021.

For the time being it's impossible to say exactly what the games 6.0 update could introduce to the game.

Typically at this stage, we'd have some idea since historically, the new expansion would have been announced at the games November Fan Fest.

As mentioned though, with the Fan Fests put on ice, we'll have to wait until the digital February event for our first details for the next FFXIV expansion and various 6.0 changes.